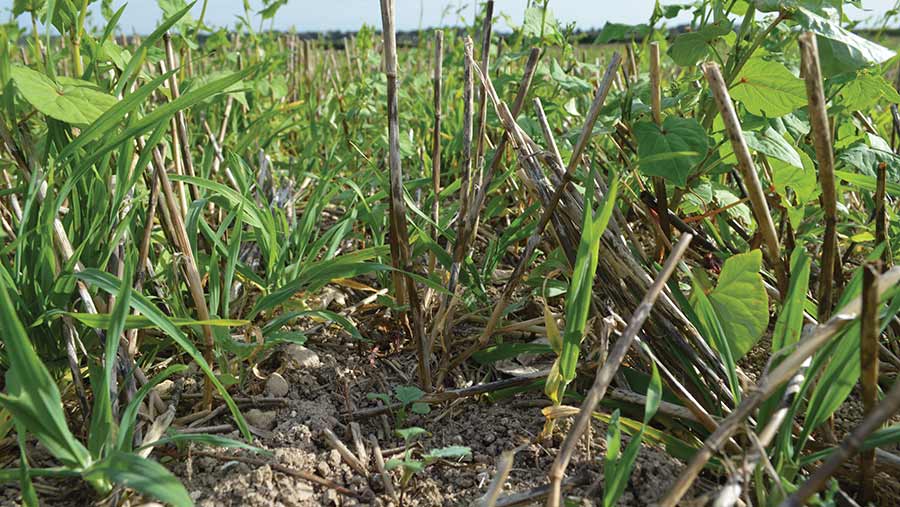 Delayed drilling and companion cropping have helped to get oilseed rape off to an excellent start on Jim Farquharson’s Dorset farm, and so escape the clutches of the crop’s most damaging pest, cabbage stem flea beetles.

He lost half his rapeseed last year to flea beetles so is hoping that a late-drilled crop hidden under a companion crop and sprouting volunteer cereals will keep it safe from the insect migration.

This new approach has seen a further advantage in that it has kept the oilseed rape crop largely hidden from “feathered” flea beetles, or hungry partridges reared as part of the farm’s shoot.

“I am more optimistic about oilseed rape this season. It is often a crop that can deceive you, but this year has restored my confidence in the crop,” says Mr Farquharson.

Flea beetle damage saw his farm’s rapeseed yields drop to 3.3t/ha last summer rather than more normal yields of up to 4t/ha, while 37ha of the crop was lost to flea beetle damage last season.

Oilseed rape is important on the farm as it is the only break crop grown along with spring beans, on the 400ha of light chalky arable land at Eastbury Estates, Tarrant Gunville, just north-east of Blandford Forum.

So the oilseed rape strategy was changed in conjunction with his agronomist, Todd Jex, from drilling in early to mid-August and seeing a big crop developing in the autumn, towards drilling in late August and hiding the smaller-sized crop. 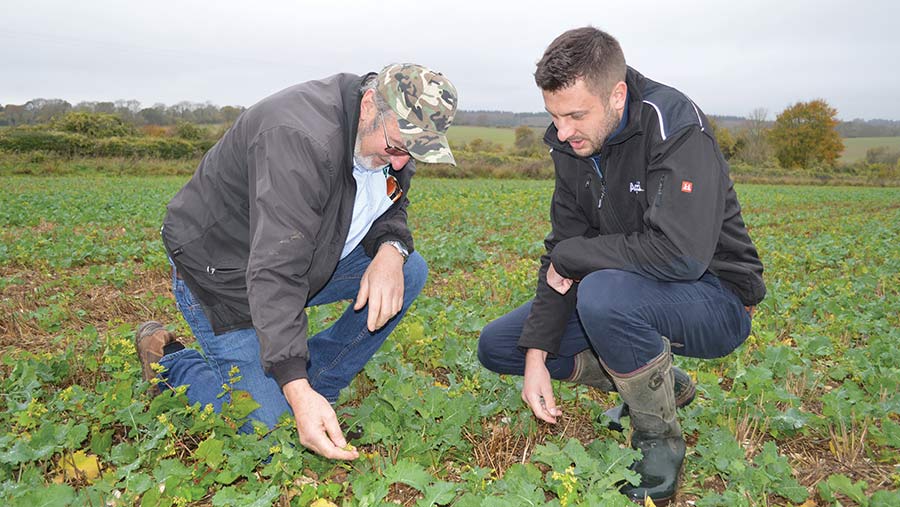 After harvesting only 33ha of rapeseed in the summer of 2020, which survived serious flea beetle damage from the 70ha planted, he was confident enough of the new approach to push up his oilseed rape area for this season to 92ha.

This season’s new strategy started with leaving long stubbles from the preceding wheat or barley crops, to give some cover from flea beetle attacks, with all the straw baled and carted away.

A companion crop of buckwheat was planted in the first week of August with an air seeder, the ground was then lightly harrowed and light August rainfall led to good emergence of the companion crop.

The rapeseed was then direct drilled in the last week of August into the companion crop with the farm’s 6m Horsch Sprinter tined drill, with minimal soil disturbance to maintain as much moisture in the seed-bed as possible.

This was a move away from the farm’s previous system of minimum cultivation and then looking to produce a fine seed-bed in early August, which had proved to be more prone to loss of soil moisture.

The oilseed rape seed was combined drilled at 50 seeds/sq m, with a variable-rate diammonium phosphate (DAP) fertiliser giving the crop an average of 30kg/ha of nitrogen and some phosphate into the seed-bed. The only other treatment was applying slug pellets.

Therefore, the crop was established relatively cheaply, with only three inputs used – buckwheat seed, oilseed rape seed of the hybrid variety InVigor 1035 and slug pellets. No glyphosate or pre-emergence herbicides were applied.

The theory was to try to miss the big migration of flea beetle in late August and early September, and keep the crop hidden from any late insect movements through September, and in late October the strategy appeared to have worked.

The rapeseed had emerged by mid-September, and so was not likely to produce a lush, big crop for overwintering, with no sign of flea beetles.

This companion cropping technique avoided having small oilseed rape plants and lots of brown soil visible, which has been seen to attract the insects.

Early drilling also means that emerged crops are exposed to the main adult flea beetle migration period for longer and so can lead to more flea beetle larvae being seen in the spring.

Mr Farquharson was also pleased that the headlands of his fields were looking better as his partridges were not finding the tasty young rapeseed plants so easily under a protective cover.

“This year, the weather has been more favourable towards establishing oilseed rape, but the low soil disturbance approach definitely helped,” he adds. 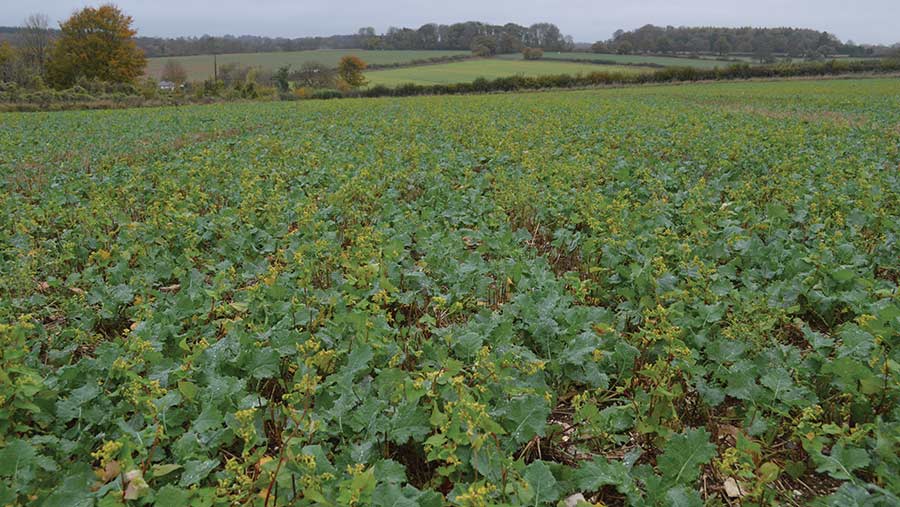 Once the crop had established well, money was spent on the crop with the graminicide propaquizafop (Shogun) applied in September to control cereal volunteers from the previous wheat or barley crops.

Post-emergence broadleaved weed control came in the form of Arylex + picloram (Belkar) plus aminopyralid, while propyzamide (Kerb) will be used later on fields with blackgrass or other grassweed problems.

Some of the buckwheat had started to flower in the autumn attracting flea beetle predators, such as parasitic wasps, and this allied to the companion crop approach is likely to see no insecticides being applied this autumn.

“Adult flea beetle are around in the area, but we have not seen them in this farm’s crops,” says Mr Jex.

The buckwheat is controlled by some of the herbicides applied, but it is not cold hardy and will die out with the onset of the first cold weather.

During October, the first signs of phoma disease were seen in the crop, but Mr Jex is hoping to hold off as long as possible with a fungicide to allow protection also against the more serious light leaf spot.

When threshold disease levels are reached on phoma then the plan is to use the azole fungicide prothioconazole, which is active against both diseases.

If the crop is well grown then a prothioconazole mix with fellow azole tebuconazole could be used. The latter having some plant growth regulator effects on the oilseed rape crop.

The AHDB recommendation for phoma/stem canker is that oilseed rape varieties with lower resistance scores for the disease (7 and below) and smaller crops should be treated when 10-20% of plants show phoma.

Varieties with higher scores of 8 and 9 should only be treated when more than 20% of plants have symptoms.

Oilseed rape varieties are rated on a 1-9 scale on the AHDB Recommended List for disease resistance, with a high figure showing good resistance.

The AHDB advice on light leaf spot is to treat oilseed rape crops as soon as the disease is detected.