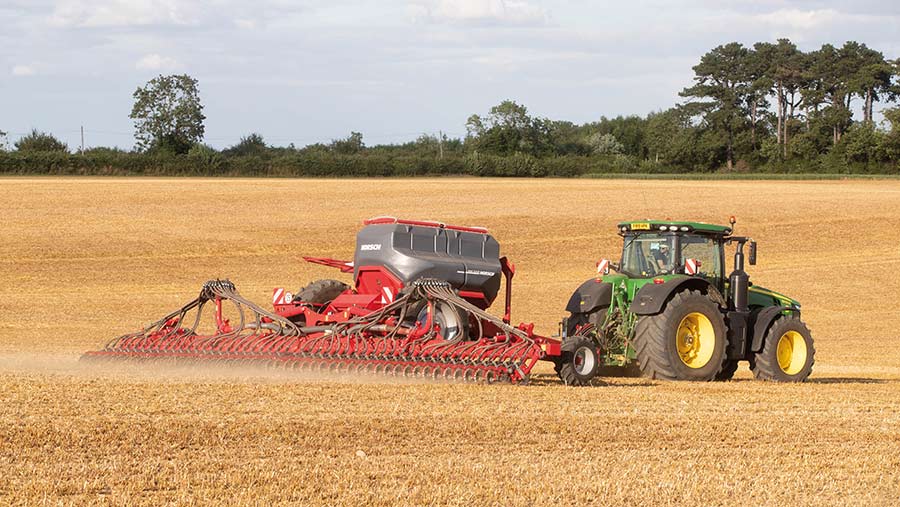 An AHDB and industry-funded project aims to better understand the biology of cabbage stem flea beetle (CSFB) as well as test the most promising integrated approaches on farm.

Year one of the project saw 19 separate trials and there are at least a dozen this year, says Sacha White, principal research entomologist at Adas, highlighting the efforts being made to find effective IPM solutions.

The first results have emerged from three trials looking at sowing date, companion cropping and applying digestate. Here, we look at some of the early learnings.

In previous work, Adas had built a CSFB database, bringing together data from various sources including national adult damage and larval surveys, flea beetle assessments at selected Recommended List sites, and other Adas work along with data from industry partners.

This database revealed an effect of weather on flea beetle damage with crops that saw a lot of rain after drilling suffering less damage than those in dry conditions.

Sowing date also had an effect on the growth stage when beetle migration occurred. If migration happened at or before emergence, there tended to be higher levels of damage than when it happened when the crop was at the cotyledon stage or later.

However, the survey also showed that early drilled crops have higher larval levels in the autumn and following spring, Dr White warns.

“But the big question mark is that this is based on survey and modelling work and trials are needed to confirm this.”

So last season, Adas carried out a trial in the West Midlands drilling crops on 26 August, 6 September and 15 September.

The 6 September-drilled crop was lost to flea beetle, so was redrilled on 1 October and that was also lost, he says.

Looking in more detail at flea beetle numbers, the 6 September date coincided with peak migration while the later date (15 September), numbers were tailing off. Consequently, they saw much less damage in the 15 September than the 26 August drilled crop.

He concludes that the trial supports evidence from the survey and modelling work that sowing date is critical for determining pressure.

There is a high-risk window from the third week of August until mid-September.

So this gives growers two low-risk windows, the first being prior to the third week of August and the second after mid-September.

“But if you sow early, the main risk is larvae with the later sown crop having fewer larvae.”

The second trial looked at drilling OSR with a companion crop with buckwheat, buckwheat plus berseem clover, and a three-way mix also containing fenugreek.

There were few differences in terms of plants/sq m established suggesting that companion crops were not hindering establishment.

Having a companion crop reduced adult flea beetle numbers by up to 49% and damage by up to 61%. Similar results were seen in 2020/21, but he cautioned that flea beetle pressure was low in both years.

The effect of companion crops on larval numbers and yield is still to be confirmed.

The third trial looked at digestate, either applied in the seed-bed or to the growing crop to coincide with peak migration.

Dr White says seed-bed digestate improved establishment by up to 51%, which he believes is likely to be due to readily available N.

Delaying the digestate application reduced flea beetle numbers by up to 27%.

Overall, digestate reduced flea beetle damage by up to 18%. “It’s not huge numbers, but it is helping,” he says.

While it’s still not known how it works, he suggests digestate could either be masking the smell of the crop or actively deterring cabbage stem flea beetle.

Other work being carried out includes stubble length, variety choice and cultivation method.

The three-year (2020/23) AHDB and industry-funded project is being led by Adas, partnered with Harper Adams University.

There are several on-farm trials investigating:

Adults are 3-5 mm long, metallic blue-black or light brown. They have long antennae, large hind legs and jump when disturbed. They are particularly visible at harvest, as they move across trailer-loads of rapeseed.

The larvae are white, with numerous, very small, dark spots on the back, a black head and tail, and three pairs of dark legs. When fully grown, they can reach 6mm in length.