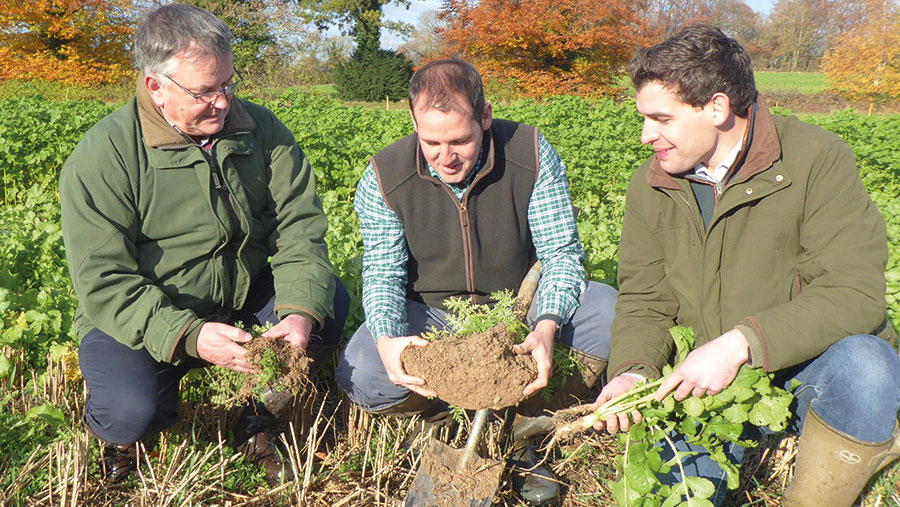 Digestate is treated as liquid fertiliser on the farm, rapidly growing cover crops suck up carbon over the winter and tillage is moving toward direct drilling, while soil organic matter is rising sharply, holding even more carbon in the soil.

However, he is not resting on his laurels, with companion crops being trialled to cut nitrogen use in wheat and oilseed rape, while lupins grown with no need for nitrogen are being tried to supply a ready livestock feed market in Wales.

“We are aiming to produce food, but in an environmentally friendly way, and going carbon neutral is doing the right thing,” he tells Farmers Weekly.

All this is helping to sequester more than 21,000t of carbon dioxide on the farm each year, and then the resulting high soil organic matter levels of 7-8% helps to keep carbon in place.

This is being done while growing 10t/ha yielding winter wheat crops, oilseed rape which averaged more than 5t/ha in summer 2021, and big crops of maize silage for surrounding dairy farms.

“We are growing crops which take in carbon dioxide, which is then held in the soil, leading to improved organic matter levels,” he says.

Mr Anthony farms with his wife Lyn and their son David – who looks after the contracting business – at Tythegston Farm, midway between Bridgend and Porthcawl near the south Wales coast.

The soils range from heavy wet clays to pure sands.

The journey to lower carbon emissions started with a mission to improve soil health some 15 years ago by signing up for a long-term contract to use digestate from an anaerobic digester plant situated on the edge of the farm.

The local authority plant uses household food waste and so produces a very consistent product for use as a fertiliser, which forms the mainstay of the nutritional demands for the farm’s main winter wheat, oilseed rape and maize crops

Mr Anthony’s farm manager, Dan Moore, says inorganic fertilisers often account for 25% of the carbon emissions from arable farms, and they have managed to cut this at Tythegston to 2%.

Feed wheats usually get an early dose of bagged fertiliser to provide 20-30kg/ha of nitrogen plus some sulphur in early March, and then two main applications of  digestate at the end of tiller (GS30) and early stem extension (GS32) provide total nitrogen to the crop of 250-260kg/ha.

Graham is the farm’s main wheat variety, grown for its reliability, while milling variety Extase is being grown for feed and was picked for its excellent resistance to wet weather disease septoria.

The use of digestate along with turkey litter, compost and the effect of sheep grazing has helped bring soil organic matter up to the impressively high 7-8% from 2-3% previously, helping to sequester even more carbon.

The digestate can be stored in three large lagoons on the farm and then spread by an umbilical pipe system, with two tankers with dribble bars also used.

Another key fact in limiting carbon emissions is always having a crop in the ground, and a forage rye/Westerwolds ryegrass cover crop mix is used over winter before a spring-sown maize crop.

This fast-growing cover crop provides good ground cover over an often wet Welsh winter, and then can be cut or grazed by sheep before maize is drilled in the spring.

In a further move to keep ground covered all year round, oilseed rape stubbles are cultivated with a tine and disc TopDown, with a seeder attached to provide a quick catch crop of phacelia which is grown for about four-to-six weeks ahead of winter wheat being drilled into it in the autumn.

“Wheat crops after the phacelia look very green, and it is remarkable how the phacelia holds the nitrogen in the soil,” says Mr Anthony.

Wheat grown after phacelia also cuts cultivation costs as wheat can be drilled directly into the sprayed-off phacelia, while before it needed another pass of the TopDown cultivator before drilling wheat.

“The rooting of the phacelia is incredible. If you dig it up there is a big root system filled with worms,” says Mr Moore, who adds that omitting a pass of the Top-Down saves £58/ha for the cost of the catch crop seed at £10-12/ha.

Next season, the farm will try to add vetch into the catch crop mix as the inclusion of the legume is hoped will fix some nitrogen to help the young wheat plants.

The farm has developed a one-pass establishment technique using a Mzuri drill to sow spring beans relatively deep, then the oilseed rape together with buckwheat at a shallower depth, with the vetch then broadcast behind.

The beans and vetch being legumes help fix nitrogen, while the buckwheat mines for phosphate, and this technique has the potential to reduce nitrogen from the 150-200kg/ha used from digestate and bagged product.

Chris Taylor, local agronomist with advisory group Agrii, says that the use of companion crops in trials on the farm has shown that nitrogen levels could be cut by 30kg/ha for the oilseed rape.

Tillage is being reduced on the farm to prevent carbon emissions and the aim is to try to move to more direct drilling, but this process is difficult with challenging soils and heavy annual rainfall of 1,250mm. Currently, the oilseed rape is direct drilled, while wheat establishment is largely minimum tillage.

The result is that the whole farm is sequestering 21,303.48t of carbon dioxide a year, using the Farm Carbon Toolkit calculation method.

The success could be eclipsed by a move by the Welsh government to include the whole of Wales in a nitrate vulnerable zone, as this would limit the amount of organic digestate they could apply to the winter wheat to 170kg/ha.

But this would be counter-productive, as if it become law it will push the farm into using more bagged fertiliser, which has an extremely high carbon footprint due to being produced by a high-energy industry.

Meanwhile, the farm looks to cut more emissions by growing wheat with an understory of ryegrass and clover to reduce fertiliser and herbicide needs, and the benefits may even survive to help a following oilseed rape crop.

A mix of a two-year Italian ryegrass and white clover was drilled this autumn, which will be grazed or cut next year, then sprayed off with a low rate of glyphosate, and the land strip-till drilled with wheat in the autumn.

Mr Taylor is also looking at how novel pulse crops perform in south Wales, as despite beans growing well on the farm, they do not produce enough protein content to compete with soyabeans.

He has looked at chickpeas, lupins and haricot beans. A lupin crop yielded 3.5t/ha with no inputs last season, so he is favouring this pulse crop, and the area under lupins will go up next spring.