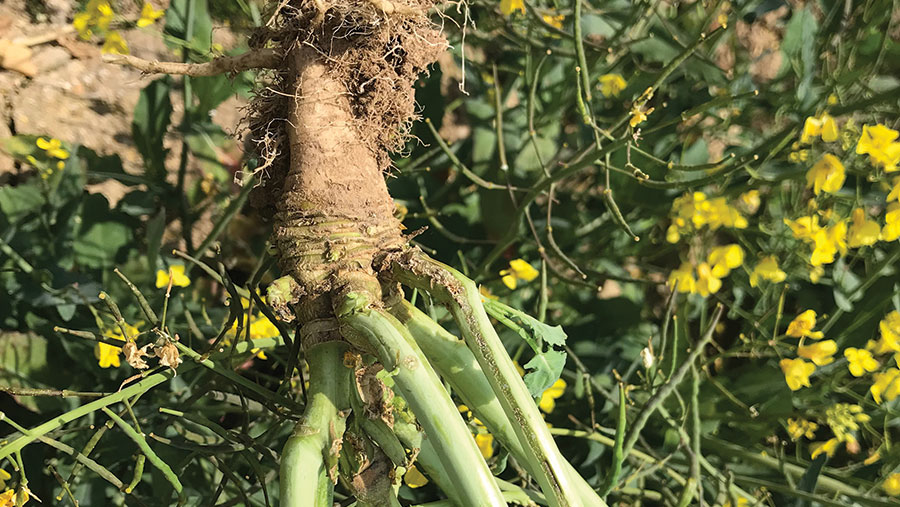 Topping or grazing oilseed rape with sheep over winter can reduce flea beetle larvae numbers by up to 44%, according to new research.

Both topping and grazing successfully cut the number of larvae, but this reduction came with a yield penalty, with an average reduction of 14%.

Sacha White, senior research entomologist at Adas, and leader of the field lab, says defoliation was trialled as a control method, as OSR has been defoliated in previous trials during the winter for other reasons, without necessarily having an effect on yield.

It was hoped defoliating the crop would kill larvae through the process of being cut or eaten, and by the larvae being exposed to the cold, more predators and disease.

The principle was first tested with successful results in a replicated plot trial at Adas before being trialled at field scale through an Innovative Farmers field lab.

The field lab consisted of eight growers who defoliated 12 fields either by using a topper or flailing, or by being grazed by sheep between Christmas and March.

In 10 out of 12 fields, this resulted in a significant reduction in larvae numbers, with an average reduction of 39%.

Grazing resulted in higher reductions, up to an average of 44%, compared with 35% for topping.

It is difficult to draw conclusions on which method is more effective, as the defoliation was carried out at different times by the individual farmers, says Dr White.

While effective, the field lab did reveal that yields had suffered as a result of the defoliation.

Dr White only received yield results for seven of the 12 fields, but there was a consistent yield reduction across all of the sites.

In those fields where only part of a field was defoliated to allow for a direct comparison, there was on average a 14% reduction, with no significant difference between defoliation method.

“Timing is important, some of the sites were defoliated in February or March and this definitely doesn’t leave enough time for the crop to recover,” he says.

However, this cannot be the only reason, as crops that were defoliated in December and January also saw a yield reduction, while the plot trial at Adas did not, despite mowing at the same timings.

“The biggest factor is the spring weather, as it was a very dry season and that would have reduced the plants’ ability to take up fertiliser.

There were also yield reductions in the second year of the Adas plot trial due to the dry spring.

As well as not having the opportunity to branch, the cool temperatures in May would have limited the ability of the plants to pod set.

“This would especially have affected the defoliated crops, as these would have been slightly behind.”

The fact that crops were badly affected by flea beetle last year, and on top of this had to cope with being defoliated, could also have reduced their ability to yield well.

Despite seeing yield reductions, all of the farmers who took part in the first year of the trial were open to repeating it.

As spring weather is the main deciding factor of whether defoliation results in a yield penalty, it is important to give crops the best opportunity, says Dr White.

“It is very difficult to predict the weather, as we don’t get a normal spring.

“Three to four years of trials have shown that timing is key, and that if it is carried out before February, there isn’t a reduction in yield.

“There is a track record that it does work. Hopefully, next year the conditions won’t be so unforgiving,” he says.

The field lab will be repeated this winter.

Before moving to a field-scale trial, a mower was used to defoliate a plot trial at Adas three years ago, to great effect.

Flea beetle larvae numbers were reduced by up to 55%, with the highest reductions seen from the later mowings.

Although the plots, which were mowed in December and January, yielded slightly more at harvest, it was not a significant increase over those mown later.

This replicated plot trial was repeated for a second year to compare the effect of a December mowing with a February one.

The trial also looked at the effect of rolling on a frost and on removing the debris after cutting.

“Removing debris did nothing. We thought that if the debris containing the larvae was removed it would reduce reinvasion of the crop, but the results actually strongly suggest that increases in larvae numbers after defoliation is due to late hatching,” says Dr White.

This time, the trail did see yield reductions, particularly from the February mowing, and also when the debris was removed after the December mowing.

Dr White believes mowing in February left the crop too little time to recover, given the dry spring, and removing the debris also removed nitrogen, which would otherwise give the crop a boost.