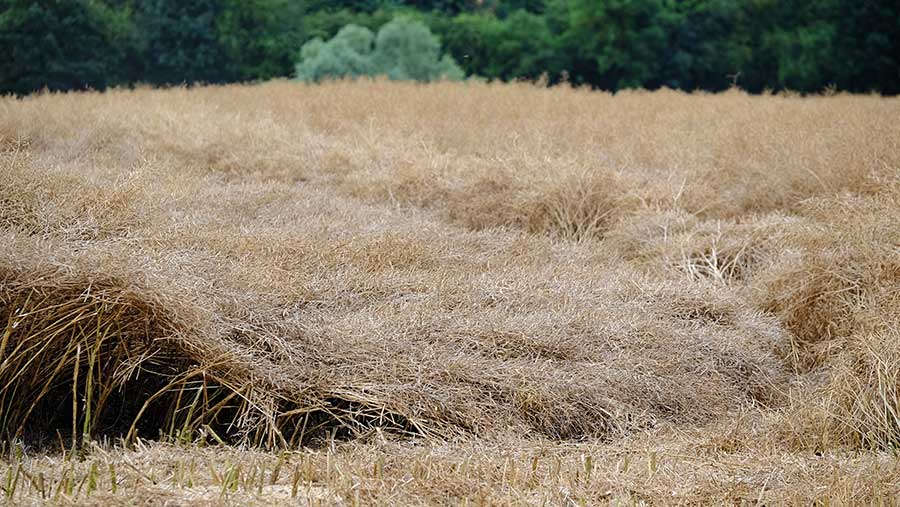 The investigation, run by crop consultant Adas, highlighted that even healthy crops which exhibit normal outward development with little flea beetle damage can be prone to lodging.

Low-level flea beetle damage was found to reduce stem strength by nearly 30%, which ultimately led to a 23% higher lodging risk.

The cost of lodging in oilseed rape

Each year, a significant area of oilseed rape in the UK lodges, and this is often missed or not identified until harvest, explains Pete Berry, head of crop physiology at Adas.

A study examining the impact of lodging on yield loss found that severe lodging at 90deg during early flowering reduced yield by nearly 50% and oil content by 8%.

Late leaning was shown to have substantial effects on yield, with a 22.5deg lean at mid-seed fill causing a yield loss of 16%, despite this often considered to have no detrimental yield effect.

During lodging, the canopy compresses, so it is no longer in a favourable orientation for capturing light. Seed fill efficiency falls and pods abort, causing yields to tumble.

Fran Pickering, entomologist at the group, explains how the trial set out to examine CSFB and its implications on stem strength and lodging risk in OSR crops.

A total of 50 plants were collected from two sites in May at the end of flowering, where the diameter and breaking strength of each stem was recorded.

The internal flea beetle damage of the crops were then scored on a scale from one to five, where one was minimal damage and five was severe.

“Most stems experienced minimal to moderate damage, with a score rating of either one, two or three,” she says.

It was also discovered that larvae cause mining and browning at the stem base, which restricts nutrient and water uptake in the plant, contributing to the development of both a hollower and weaker stem and, consequently, a greater likelihood of lodging. 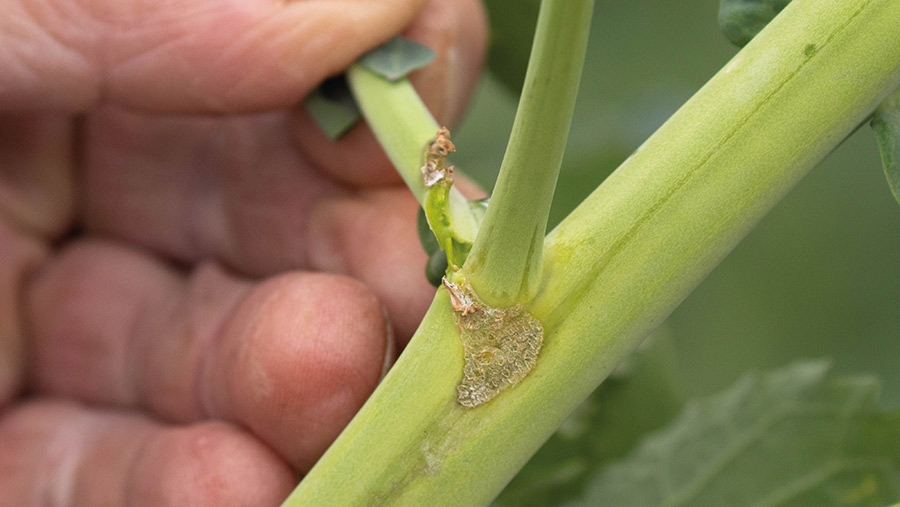 Even low-damage crops, with 6-25% of their internal area damaged, experienced a lodging risk increase from one in 10 to one in three. This was due to flea beetle damage reducing stem strength by 29%, despite crops expressing normal outward development.

This highlighted the significance of lodging in OSR, with many crops appearing visually fine, but actually suffering from significant stem weakness.

In fact, it was only “severely” damaged crops, which had between 76 and 100% of their internal crop area damaged, that were identifiable externally.

To help counteract stem weakness, she offers the following advice: