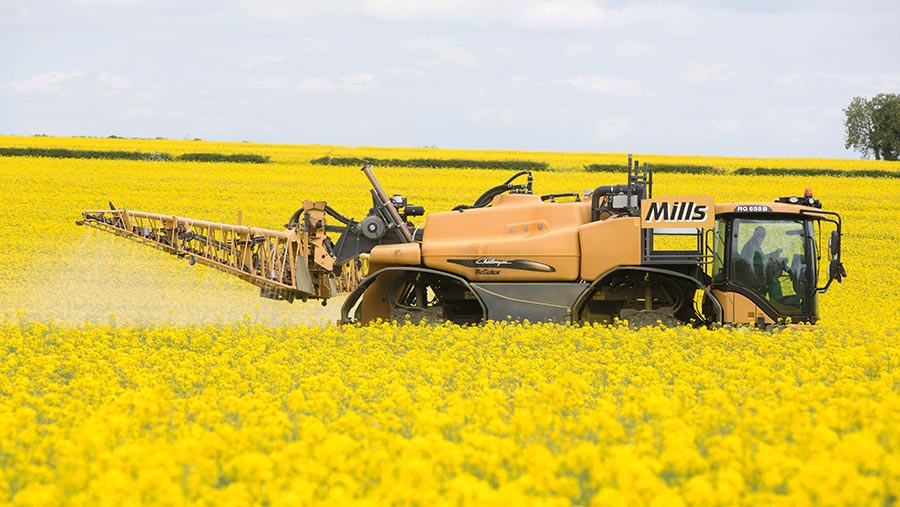 Oilseed rape growers may be able to save money and miss out on a fungicide flowering spray by drilling the first ever variety with tolerance to stem rot disease sclerotinia.

The new breakthrough high-yielding hybrid variety PT303 comes from breeder Pioneer, which is part of the agrochemicals and seeds giant Corteva Agriscience, and “significant quantities” of seed will be available this summer.

Although the multi-gene trait does not give 100% resistance to the yield-sapping disease, the group describes it as a “major milestone” for plant breeders as it could reduce spraying of the tall crop or even cut out flowering sprays altogether.

Andy Stainthorpe, seeds and inoculants sales manager for Corteva, says the new tolerance or partial resistance trait does not come at the expense of other essential features, such as yield and other disease-resistance qualities.

“In the current struggle against sclerotinia, this brings another tool for control, and creates more options for the farmer,” he says.

With global warming and the resultant increased wet and humid weather, sclerotinia could become a bigger burden for growers, and although it only strikes seriously once every few years, when it does, the disease is hugely damaging to yield.

Sclerotinia is the main disease to consider during the flowering stages of oilseed rape as it can halve yields in bad infection years, when warm and humid weather at flowering helps its spread.

The disease shows up as white stem lesions with black sclerotia within the plant’s stem cavity, which cuts off nutrient supplies to the crop canopy, and in extreme cases the whole plant dies. 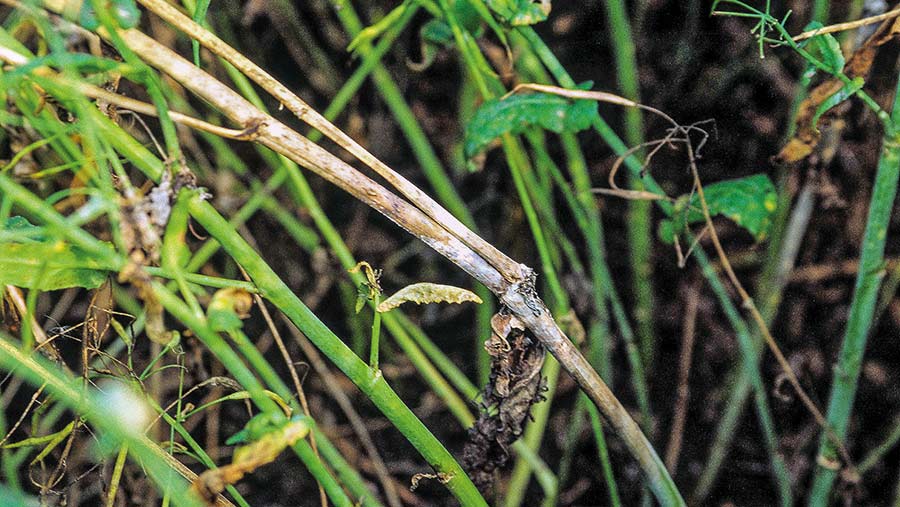 Short rotations and conducive weather helps it spread and seasonal infection risk alerts are issued by the AHDB, but the spraying of a tall, flowering crop is always difficult, with potential harm to bees to avoid.

In Corteva trials with oilseed rape crops showing sclerotinia infection levels at 25% or above, the severity of the disease using the variety was reduced by up to 75%. The higher the disease severity, the higher the benefit from the trait.

In addition, when the variety was grown in combination with fungicide treatments, the severity of the disease was further reduced.

Mr Stainthorpe adds that there should be enough seed available to drill at least 2.5% of the UK oilseed rape crop this summer, or 5% of the hybrid market assuming a 50-50 split between hybrid and conventional varieties.

“There should be significant quantities and enough for any farmer who wants to try it out this summer,” he says.

The variety joined the National List of varieties in January 2021, showing the highest yield of all candidate varieties vying to join the AHDB Recommended List due to be announced this December.

These trials use a two-spray compulsory sclerotinia  programme, so the top yield came without the advantage of the disease trait.

PT303 was the top yielder in both the East/West and North regions.

It was a touch taller than these other varieties, but had a similar resistance score for lodging and good disease-resistance scores to light leaf spot (6) and phoma stem canker (7), in a 1-9 scale where 1 is susceptible and 9 shows good resistance.

The new variety is also resistant to turnip yellows virus, and has a very high oil content of 46.2%, which is only matched by Dazzler, with a similar level on the current Recommended List.

“No products have previously offered any level of resistance to sclerotinia, but with PT303 we now have a variety that has tolerance – a major milestone in our industry,” says Mr Stainthorpe.

It also gave higher National List early vigour growth scores than the control varieties, with a score of 6 against Expansion at 5.8 and Campus at 5.5 in the 2019-20 season.

Pioneer currently has two varieties on the current Recommended List, both hybrids – PT275 and the herbicide-tolerant Clearfield variety PT279.

Jean-Claude Prevot, head of the group’s oilseed rape research for Europe, says the disease is present in most oilseed rape growing areas in Europe, and so the tolerance trait is likely to be incorporated into future varieties.