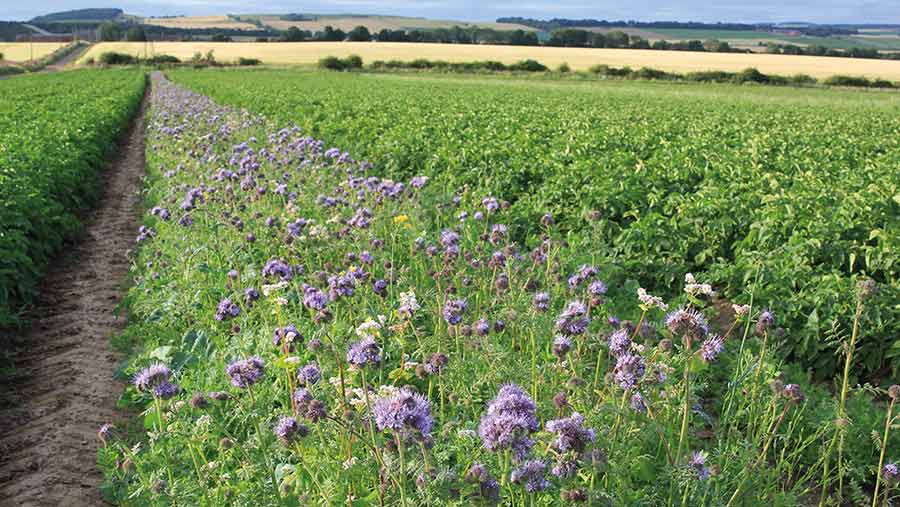 Wildflowers grown in strips through potato crops could control disease-carrying aphids and may help growers faced with a dwindling number of insecticides.

Areas of wildflowers grown in the headlands and between tramlines of crops have been shown to attract the natural enemies of aphids – namely hoverflies, lacewings and ladybirds.

Scottish Agronomy, the crop consultant group, has been trialling this technique to help growers cope with the banning of some insecticides and increased aphid resistance to others.

The level of the main damaging potato virus Y, strain N (PVYn), is now at the highest level in seed potato crops for 20 years, highlighting the need for new methods of aphid control.

Eric Anderson, senior agronomist at the group, says both ware and, more importantly, seed potato producers are looking ahead to when fewer effective insecticides are likely to be available.

“The vision is to cut back on insecticides and growers recognise that some insecticides will not be available in the long term,” he says.

Pyrethroid insecticides are currently under review by regulators, while some aphids are becoming resistant or have shown a shift in sensitivity to these products.

Meanwhile, systemics such as acetamiprid (Insyst) and flonicamid (Teppeki) have a limited number of applications allowed in seed potato crops, and restrictions could tighten further.

Even though Scottish seed potato crops only grow above ground for eight to 10 weeks, control of aphids is vital for the health of the seed and the viability of the whole industry.

Mr Anderson has trialled the technique of growing wild flower mixes on the headlands, either in 3m strips every tramline width or every other tramline width.

This creates corridors through the crop and more diversity, in a move away from a more monoculture system with its high reliance on chemical controls.

Mr Anderson’s work has identified species such as cornflower, common vetch and yarrow as good homes for aphid enemies to be reared, and these wild flowers are at a low growing height to fit in with the potato crops.

He is still refining which species should be sown and sowing dates, and hopes this may allow growers to cut back on their insecticide use in the future.

The potential virus problem in potatoes is further exacerbated by the withdrawal of diquat (Reglone) as a desiccant. This means that crop haulm stays greener for longer, so is more at risk from regrowth and late season aphid-spread viruses.

Research work in Switzerland, conducted by Matthias Tschumi, found wildflower strips to be highly effective in attracting the enemies of aphids and in decreasing aphid densities.

Of the three natural enemies, hoverflies showed the biggest increase in numbers in the strips compared with surrounding potatoes, while lacewings and ladybirds were also up sharply. 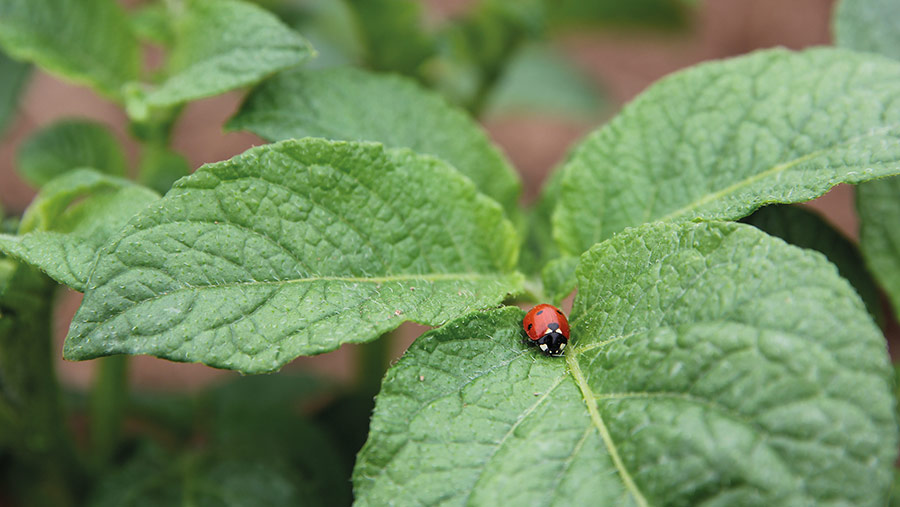 Mr Anderson points out that there can be a lag period until natural enemies have time to build up their numbers. Therefore, there is potential for integrated pest management (IPM) using both traditional and modern tools to control aphids.

This approach is being investigated at the AHDB seed potato farm at Morphie, north of Montrose, and it is hoped the wider adoption of IPM will improve PVYn control while reducing insecticide use.

The virus health of Scottish seed potatoes is a unique selling point in Britain and around the world. However, the amount of virus in crops increased significantly during both 2019 and 2020, with the highest level of mosaics recorded in more than 20 years.

The main virus of concern is PVY and the main strain is now is PVYn, with peach-potato aphid (Myzus persicae) considered the most efficient vector of the virus. The virus can cause significant direct yield losses, tuber blemishes and cracking. Potato leaf roll virus has also increased, albeit from a very low base.