Wheat growers should monitor their crops closely for orange wheat blossom midges (OWBM) after the insects were spotted in UK fields this week.

The midges have been of little trouble to crops in recent years but are being seen in abundance by agronomists in areas including Cambridgeshire and Essex, with this year’s weather proving ideal for their development.

When uncontrolled, the damage caused by OWBM can be significant, with a UK outbreak in 2004 seeing crop losses of about 1m tonnes – 6% of the nation’s production. 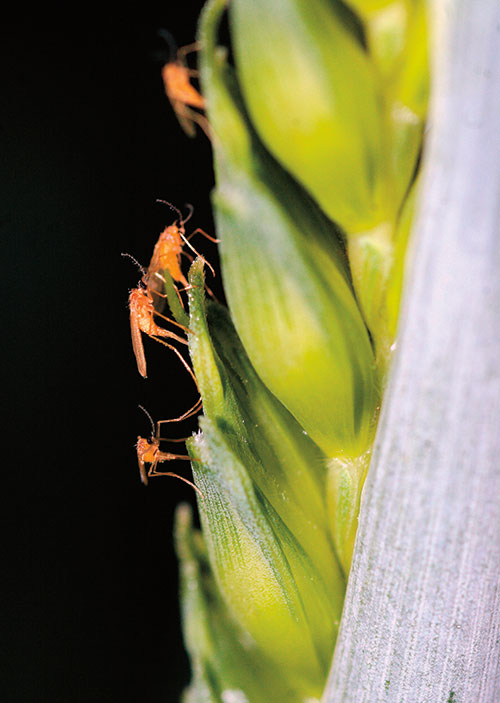 Caroline Nicholls, technical manager for independent agronomy group Prime Agriculture, says she is not surprised by the sudden increase in sightings.

“This year, we’ve seen the right weather for the midges to appear, the cold winter cooled soils long enough to break diapause [a period of suspended development in an insect caused by an unfavourable environment], then the recent heavy rain and warm temperatures triggered midge emergence.

“Although I must admit, this is the most I have seen in quite a number of years,” she said.

Miss Nicholls also highlighted that this is the first year significant numbers of OWBM have been seen since the most effective insecticide for controlling the midges, chlorpyrifos (Dursban), was banned in the UK in 2016.

She recommends growers look to apply an insecticide to control any outbreaks.

Pyrethroids or thiacloprid (Biscaya) can be applied but  timing is crucial.

“A spray should target the adult midges and should be applied when thresholds are exceeded.

“Control of larvae is limited and eggs cannot be controlled at all. The crop is only at risk during ear emergence, eggs laid on florets will fail to develop,” she said.

Miss Nicholls explained milling wheats are at particular risk of damage as the larvae breaks down inside the grains, leading to a reduction in Hagberg level. An infestation of two or three larvae per grain site can result in as much as 75% loss in yield, she added.

This is the most I have seen in quite a number of years Caroline Nicholls, Prime Agriculture

Paul Fogg, crop production specialist at Frontier reiterates the point that growers should keeping a close eye on their wheat crops, in order to deal with any infestation.

“There’s no hiding from the fact we are seeing some pretty big numbers, especially in the South. On Wednesday [30 May] night, a pheromone trap set in Oxfordshire caught 350 OWBMs.

“Many crops are starting to come to flower, after which the risk is somewhat diminished. But, until then, it’s vital growers monitor their crops closely. Controlling the adult midges helps to mitigate the risk of yield damage in crops,” he added.

There are some OWBM resistant varieties available on the AHDB Recommended List, including Skyfall, Barrel and Leeds.