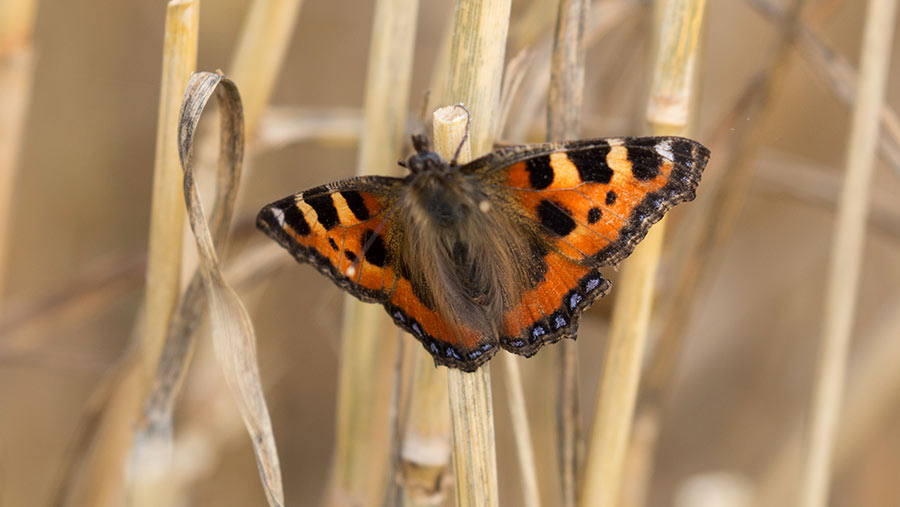 Wild pollinators help contribute £690m a year to UK food production and are crucial for the health of arable crops.

While common species are showing signs of stability, other rarer ones are decreasing in numbers.

With 81% of the land in some counties farmed, as is the case in Lincolnshire, farmers have a vital role to play in supporting pollinators, but some options can have high establishment costs.

The Greater Lincolnshire Nature Partnership (GLNP), a not-for-profit organisation, has been working with two clusters of farmers in the county to help them identify areas of their farms which could be managed differently to better support pollinators.

The GLNP was set up in response to concerns that growers were coming out of existing agri-environment schemes and not entering into new ones, says its senior policy officer, Sarah Baker.

After an initial farm visit in 2017 to survey existing pollinators, the partnership highlighted three or four areas on each farm which could be managed differently to help support insects.

While not all of the measures will be applicable to every farm, three areas which could be tweaked on many farms are farm verges and trackways, nettles, and maize game cover.

Although growers tend to keep farm verges and trackways quite neat and short, they can provide a habitat for more flowering species.

By mowing only the front of the verge the appearance is kept neat, while the back can be left longer to provide sources of pollen and nectar.

“One of our farmers said they could see a difference to pollinators when they left the verges,” Ms Baker says, adding that while there were concerns around an increase in weed pressure, the farmer was satisfied that the longer verge was not affecting nearby crops.

If nettles can be left in some areas, or topped at a different time of year, such as in June, they can support butterflies with growth later in the year.

Maize game cover is land already taken out of production alongside hedgerows, but maintained as sterile strips which do not provide any benefits to insects.

With pollen and nectar strips topped by mid-August, and the oilseed rape finished flowering, pollinators can be left without a source of food.

The GLNP has tested several approaches to try to increase the benefit of these game margins, such as mixing them with sunflowers.

While sunflowers have proved difficult to establish due to pigeons, and were not driving the partridges particularly well, reducing the maize area and replacing it with a flowering species mix up to the hedge has proved more effective.

One large Lincolnshire shooting estate put together a bespoke two-year mix of phacelia, fodder radish and kale, and drilled 2m along hedgerows.

“It’s clear these game covers have the potential to have a big contribution with just a few tweaks,” Ms Baker says.

“Some farmers are already using wild bird seed mixes to buffer their maize. Could some additional species be added in?”

What pollinators need to thrive

These are sources of both nectar and pollen at all times of the year; nesting sites such as in hollow stems or the ground; and overwintering sites such as hedgerow bases and north-facing banks, so that they can complete their life-cycles on farm.

The farms were revisited in 2018 to assess the impact of measures taken, with the data helping inform a set of 24 low-cost options which could be applicable to most farms across the country.

The GLNP has also produced a survey to help growers identify the current provision of pollinator habitat on their farms. Farmers can find details of the 24 low-cost options along with the survey at the GLNP website.