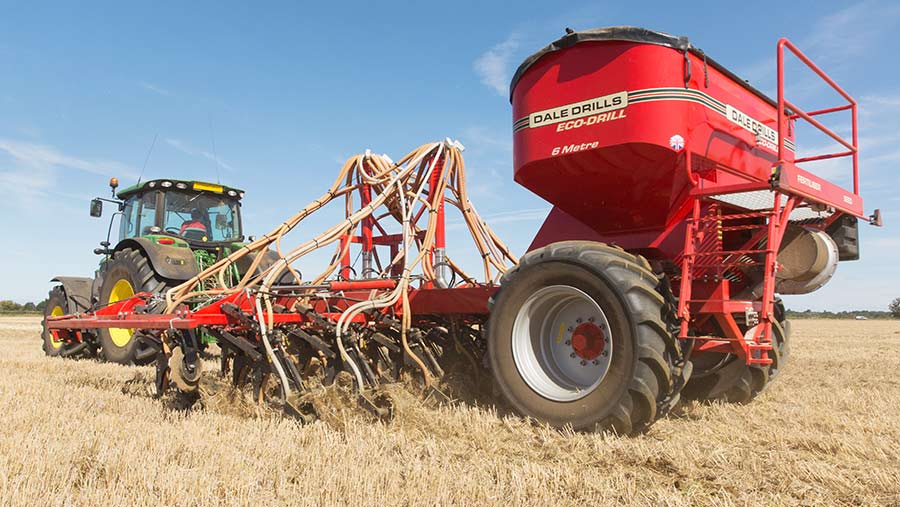 Farmers reluctant to grow oilseed rape again after a terrible year for establishment are being offered plenty of advice and incentives to stick with the crop ahead of the new growing season.

From contrasting drilling date and seed rate recommendations, to guidance on varieties and the use of novel agronomic techniques, fear of crop loss is also being addressed by various hybrid seed replacement and risk share schemes.

Results from Niab Tag’s crop damage survey showed that 13% of crops drilled last autumn were written off, much of which was due to the lack of moisture availability at the time of sowing.

The survey, which was based on more than 1,040 responses, highlighted that only 12% of crops were unaffected. The remaining crops all had some flea beetle damage and many have since been compromised by larvae feeding in the plants.

The clearest message from the survey was that early sowing was associated with the best establishment, providing there was enough moisture to germinate the seed.

“There was a strong trend that crop damage from flea beetle increased with later sowings,” says Simon Kightley, oilseeds expert with Niab Tag.

“It seems the later you drilled, the worse it got.”

Early sowing allows the crop to exploit the warmer soils and longer daylength to grow away strongly, he points out.

“You throw away this advantage as you get later. As many as 2.5 sunshine hours per day are lost as you move from August into September.” 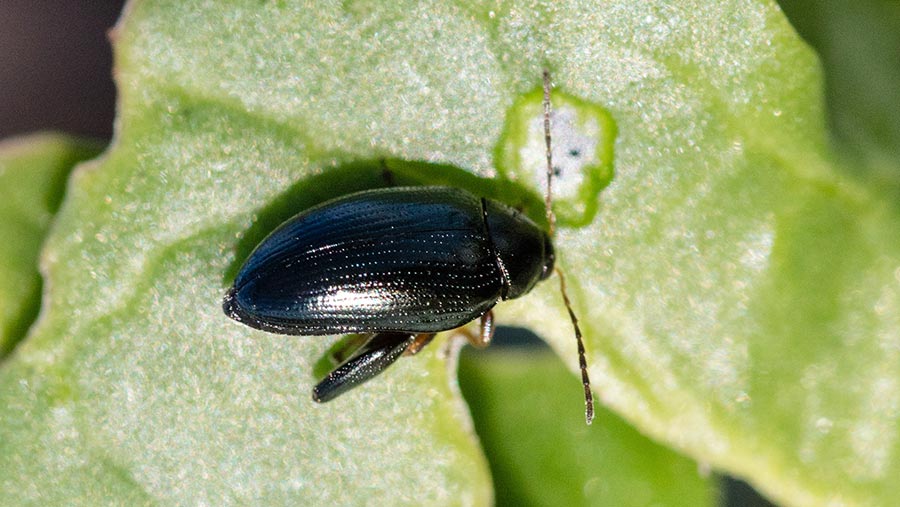 Sacha White, senior research entomologist  at ADAS agrees that the aim has been to establish a vigorous crop by the time that flea beetle migration starts – usually towards to the end of August – but questions whether it increases larval pressure.

“There have been reports of 80 larvae/plant this spring, whereas the previous record was eight larvae/plant.”

He believes there is good potential for late drilling to help manage larvae numbers, as it offers a means of pest escape and causes eggs to be laid in cooler temperatures, which slows their development.

“Drilling date is the only agronomic factor that has a consistent effect on larvae numbers. However, we do need to learn more about any yield trade-offs.”

Dr White believes the question that growers need answering is whether the yield loss will be greater from larval damage than from late drilling.

Hybrids do show slightly better early vigour than conventionals, which may have an advantage in borderline situations, says Mr Kightley.

“This pattern has shown up over the past few years. Of course, it doesn’t apply to all hybrids and there are some vigorous conventionals too.”

There were no significant differences between varieties in terms of flea beetle damage in an IPM project, reports Dr White.

“Attractiveness and palatability, as well as variety tolerance to damage, are going to be assessed again this year. More detail on useful characteristics, such as early vigour, could be helpful too.”

“Late drilled situations are often more challenging, which is why hybrids cope better,” she says.

She points out that the autumn vigour in the current InVigor hybrids is better than those varieties used in this trial, so they can help with establishment risks.

“With these varieties, it may be possible to re-consider drilling windows.”

“Of course, there’s a seed price hurdle with hybrids and higher rates, so this is more viable with conventional varieties.”

He suggests a target of 60 plants/sq m, rather than 40, and points out that varieties with proven standing ability should be chosen.

Dr White highlights that there has been no difference in larval populations with seed rate, with crop density having no impact on numbers.

“With later drillings, in September, there is no benefit from going above 80 plants/sq m.”

“They detect isothiocyanates to locate crops.”

He looked looked at whether delaying the control of volunteer oilseed rape in a neighbouring field could help by “luring” the beetles away from newly drilled fields and breaking the pest’s life cycle.

A benefit was seen in four out of six trial sites, with an 89% reduction in adult beetles and 67% less larvae when volunteer control was left until late September.

“Now we need to look at the consequences of this approach on weed control and disease pressure,” he says.

Defoliating oilseed rape during the winter to control larvae is another option, he suggests, with work indicating that there is very little effect on yield if defoliation occurs before stem extension.

“We’re looking at grazing and mowing, with more work planned. So far, we’ve seen a good effect on reducing larval number, but the impact on yield needs clarification.”

In year one, the highest yield was recorded in the December mown treatments, but the difference between December, January and March timings was small.

Both BASF and United Oilseeds have joined the move to reassure growers about the cost of hybrid seed and the risk of establishment failure.

BASF has an InVigor Establishment Risk Share Programme, which will see growers of all six InVigor winter oilseed rape hybrid varieties drilled before 22 September this year reimbursed to the tune of £30/ha, providing the claim is made by 31 October.

“We understand the risk and recognise that the challenges facing oilseed rape are often outside  the farmer’s control,” says Sarah Middleton, campaign manager at BASF.

United Oilseeds is offering free replacement seed on all its HOLL buy-back contracts with V316OL, but only if crops haven’t established by 15 September.

“For the 2019/20 crop, we are also offering peace of mind with our free seed replacement scheme.” 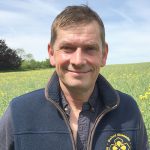 Hampshire grower Dick Hall had his first establishment failure with oilseed rape last year, having grown the crop on the farm since the 1960s.

On a rented farm, eight miles from his home farm base near Winchester, some 20% of the crop was lost to flea beetle, most of which was being grown on lighter soils and had been slower to get going.

This year, reluctant to rely on pyrethroids, Mr Hall is planning some changes to the way he grows oilseed rape, which will be established after a herbage grass seed crop.

As the ryegrass seed is harvested with a stripper header in late July, Mr Hall starts by leaving a long, tall stubble, which he hopes will act as a deterrent to flea beetles.

After one glyphosate application, the fields are ready to drill from mid-August onwards, depending on soil moisture.

“They can stay like this until mid-September. One thing we have learned is that we have to be flexible with drilling date,” he says.

Field location and history are also taken into account. He direct drills into crop residue, putting di-ammonium phosphate into the seed-bed and applying 30kg of liquid nitrogen. He then rolls it twice and applies slug pellets, if required.

Mr Hall is also planning to try buckwheat as a companion crop, which should grow faster than the oilseed rape and help to hide the emerging crop from flea beetle.

As it is frost susceptible, he is not expecting it to survive until the spring, when the oilseed rape starts to grow away.

At this stage, he is planning to grow a Holl variety, pointing to the 8% price premium and insurance offered by United Oilseed’s free seed replacement scheme, which replaces seed of crops that haven’t established by 15 September.

“I prefer to grow hybrids for their early vigour and I like the idea of stacked traits,” he says. “I will stick to the recommended seed rate.”

Pre-emergence herbicide use may not be required, as there is very little soil disturbance with his system.

“Having done everything I can to minimise the risk of flea beetle attack, the last resort will be one application of pyrethroid.”

“Spraying in the evening or at night, in cooler conditions, seems to give the best results.”