Tackling the growing problem of blackgrass is key to getting autumn-sown crops off to the best possible start. 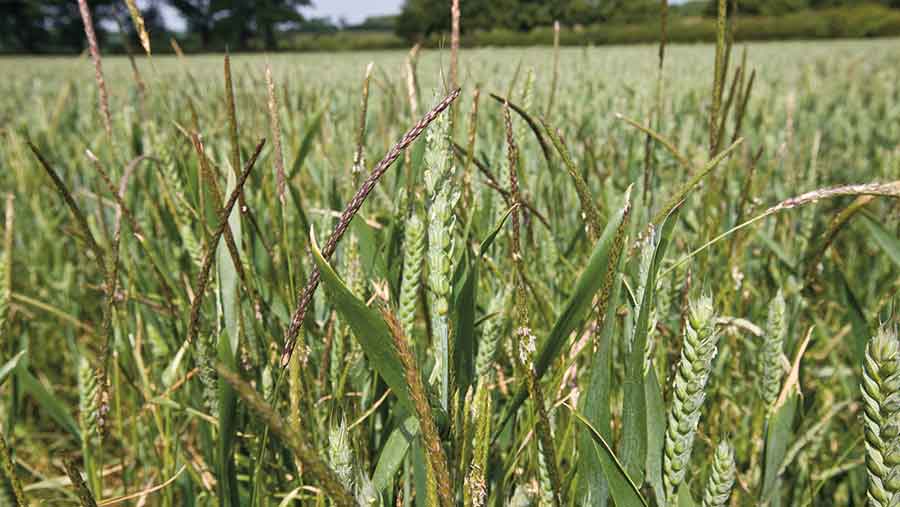 1. Admit you have a problem

If you are spending over £100/ha on herbicides in wheat there is probably a problem that needs to be addressed.

Everyone who works on the farm needs to know what they are aiming for – so decide what your farm policy is towards blackgrass and then share it with the whole team.

That includes the farm owner, family members, manager, workers, contractors and agronomist. They need to know whether you are looking for zero tolerance or containment.

For farms needing to beat blackgrass and following a wheat/wheat/oilseed rape rotation, the consultants recommend a new five-course rotation with a double spring break.

This is winter wheat/spring barley/spring beans/winter wheat/oilseed rape. Use the plough one year in four or five as a “reset” button to maximise annual seed decline.

With earlier drilling for flea beetle, do not grow oilseed rape where a high blackgrass seed return has occurred.

A 2-3% yield difference between varieties on the AHDB Recommended List is insignificant compared with losses from poor blackgrass control.

Select varieties that are vigorous and will be suited to a later sowing slot and will establish to growth stage 30 in the spring rapidly. Skyfall, Siskin, Basset are good examples of the newer varieties.

The key factor in blackgrass control with pre-or post-emergence residual sprays is access to moisture, so getting the benefits of autumn rainfall is critical.

On the worst-affected fields, delay drilling until after 20 October to give yourself the best chance of control and time applications to coincide with available moisture from rainfall.

In wheat, 400 seeds/sq m sown may be needed to aid competitiveness, but bear in mind the seed-bed quality in late October could result in establishment well below 50%.

Switching to a tine drill from a disc coulter is likely to reduce establishment. In spring beans, a 20% increase in established plants is needed to compete with germinating blackgrass.

Many growers have moved to spring cropping and delayed drilling to get better pre-emergence control, but this shortens the working window which can mean an extra man and additional drilling capacity is required.

Remember that if herbicide costs are in excess of £150/ha, this could be cut later drilling with the saving used to buy extra drilling capacity.

Preventing seed return is the most important part of reducing blackgrass. If post-emergence control is not satisfactory, make a decision pre-Christmas and plan a spring crop.

Where infestations are bad, consider the use of glyphosate (once the blackgrass has come into head) or whole-crop silage.

To avoid spreading blackgrass by machinery, sequence the cutting of fields to clear clean fields first. Consider leaving infested headlands to last and cut the middle of the field first.

It is important to blow down the combine after cutting any infected field. Finally, only bring muck and straw onto the holding from trusted sources.

Raise the bar for sprayer training regarding the timing of pre-emergence sprays, nozzles, boom height, forward speed and the need to back into corners and around poles.

Forward speed needs to be slow enough to prevent a vortex behind the boom (10-12kmph) and follow the maker’s guidance on boom height for the specific nozzle (typically 50-80cm).

Uncompetitive crops associated with poorly drained land is a common source of blackgrass seed return. There is no excuse for poor maintenance of ditches, outfalls and rotational mole ploughing where appropriate.

On owner-occupied land, a new drainage scheme or strategic installation of drains in problematic areas should be installed.

The on-farm costs of resistant blackgrass are too high to ignore. Analysis of spending on large, heavy-land farms showed herbicide costs of controlling blackgrass in wheat and oilseed rape rose between 2006 and 2015 – from £65/ha to £134/ha in the wheat and £72/ha to £103/ha in rape.

For farmers looking to expand, land coming up in the next few years is likely to come with high blackgrass pressure and those with a winning blackgrass control strategy are likely to be those who are successful.