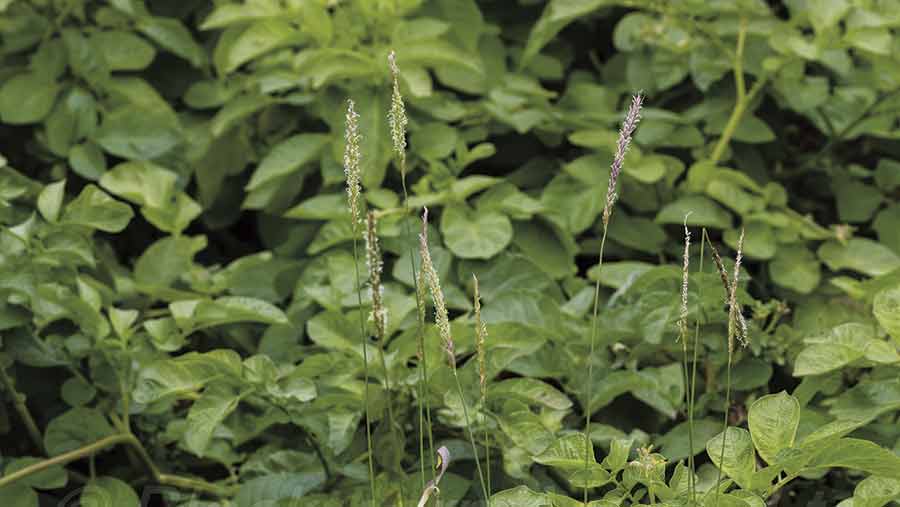 Letting out fields for potatoes could have a valuable role in tackling blackgrass, provided populations are not too high and growers take a robust approach against the costly weed.

Now is the key time for growers to take stock of their blackgrass problem and start planning for next season. For some, this could include approaching a local potato farmer and offer land for a cleaning crop of potatoes.

“There is some mechanical cultivation, they are not early planted and we can still hit them hard with residuals.”

Potato growers could also benefit by gaining access to potato cyst nematode-free, which is at a premium, he says.

However, to be successful means keeping on top of the weed during the season. So what should landlords and potato growers consider before signing up and ensure they get the full benefits?

Mr Cox highlights that potato growers are already addressing grassweed management, as blackgrass has begun to spread into the atypical lighter land via contractors’ machinery and muck from farms that source their straw from blackgrass infested fields.

And the blackgrass that is introduced is highly resistant too, he says.

This situation appears to be corroborated by data showing a late season spike in graminicide use on potatoes, which suggests that growers are already targeting grassweeds or cereal volunteers when the canopy opens up later in the season.

But if potatoes are included in the rotation, a number of factors need to be considered to ensure the maximum benefit from the crop.

Firstly, growers must know what they are taking on.

“Ideally, we would go in on stubble with a full set of information,” says Mr Cox. That includes population levels and resistance status.

Secondly, the expectation has to be managed on both sides and be reflected in the rental agreement and price/ha.

There’s competition for clean land and even though blackgrass doesn’t pose too many issues for the potato grower, letting blackgrass plants seed in the crop will rapidly reduce your attractiveness to the grower, he says.

“If it’s your landlord’s problem, it’s your problem.”

One issue with potatoes is that the cultivations used to prepare the beds and ridges are so intensive and deep that the seed is mixed through the profile making it very difficult to manage where you’ve put the seed in the seed bank, says Dr Cook.

And for all the hard work the grower has done before working it down or working shallowly, potatoes could mess all that up.

She suggests growers aim to leave shed seed on the surface and try and get as much emergence as possible, spraying it off with Roundup (glyphosate) first and then doing the big potato cultivations.

The timing of autumn cultivations, which depends on the soil type, also needs consideration.

Deep cultivations or early ploughing in the autumn can leave large overwintered blackgrass which may be hard to kill in the spring if the plants reach stem extension, warns Mr Cox.

Agrovista’s Craig Green agrees and suggests growers also consider utilising a cover crop such as black oat and vetch build to encourage blackgrass germination, build organic matter and provide a nitrogen source. The potato grower can then incorporate at some point between November and February.

There has been a big increase in green manure (cover /fumigant) crops and while these do provide some good benefits, Mr Cox cautions against leaving them too late.

“Try not to pinch an extra week’s growth when nights start pulling in. And consider nematode species present and possible free-living nematode increase. It can happen,” he says.

Mr Green believes potatoes could aid blackgrass management in the rotation and are valuable especially when following with spring wheat, but he is cautious about suggesting growers take on blackgrass land.

“If you select a spring crop you do need to have an armament against the blackgrass in the crop you grow. Otherwise, you are only relying on the cultural control to provide the benefit.”

The loss of glufosinate, poor activity of diquat, carfentrazone and pyraflufen-ethyl on grassweeds and the uncertain future of linuron means that just a handful of residual herbicides will be relied on to provide control.

And once varietal tolerance and soil type is taken into account the armoury is limited further. Some growers are using glyphosate post planting, but that is not without risk and not a strategy, says Mr Green.

A programmed approach is required and timing of residuals is critical, he says.

Artist (flufenacet + metribuzin), the cornerstone of pre-emergence treatments, should be timed pre-emergence of the crop and blackgrass.

“That’s where a lot of people have been going wrong with potatoes in my area in that we’ve traditionally left the pre-emergence to go on a matter of days before the potatoes break the ridge.”

He also recommends growers know the resistance status of the blackgrass because in some areas in the Midlands, around Market Harborough and Peterborough, there is resistance to flufenacet and, therefore, potatoes in that situation are a no go, he says.

Defy, pendimethalin and metribuzin all have blackgrass activity and can be used as pre-emergence stacking agents in potatoes as they are in cereals. The latter soon to come into the market in cereals for blackgrass control, he adds.

Newcomer Praxim (metobromuron) won’t bring enough control to the UK blackgrass populations, despite encouraging results in France, says the firm’s Simon Leak, who makes no claims for Praxim against the weed.

“It is a substituted urea, the same group as IPU, so it wouldn’t be resistance free,” he adds

However, it does seem to have good activity on wild oats and meadowgrass and is very crop safe up to crop emergence on all soil types.

More work needs to be done on herbicide mixtures and sequences in potatoes, says Mr Cox. Plus growers need to bear in mind the conditions in the spring at application. Dry conditions, slumping ridges and wind blow make applications impractical, he adds.

Chemistry is limited in the post-emergence and desiccation slots for blackgrass, but what we do have are Titus (rimsulfuron) and Falcon (propaquizafop), he says.

“Titus is performing well against small weakened blackgrass in an ideal growing situation.

“When we get to the desiccation end we really don’t have any options.”

It’s been a bumper year for blackgrass with the pernicious weed establishing itself in previously clean fields, proving its adaptability and how easily it can be transferred from field to field.

The reasons why emergence this year has been particularly high is a due to a combination of factors,  says ADAS weed expert Sarah Cook. This includes poor control in previous years and increasing herbicide resistance making blackgrass more difficult to control in other parts of the rotation.

“Then this year we had protracted emergence over the winter because it wasn’t cold, and there was more emergence in the spring because conditions were good.

“It was moist and warm and although the pre-emergence herbicides worked well, they ran out of steam.”

Grower Ralph Grindling and his team work hard to ensure blackgrass is kept under control across the diverse rotation on the 1,000ha at Russell Smith Farms in Cambridgeshire.

Onions, potatoes, sugar beet, wheat and oats plus organic crops are hand rogued, and being a LEAF and Waitrose demonstration farm, Mr Grindling is conscious not to be too dependent on chemicals. 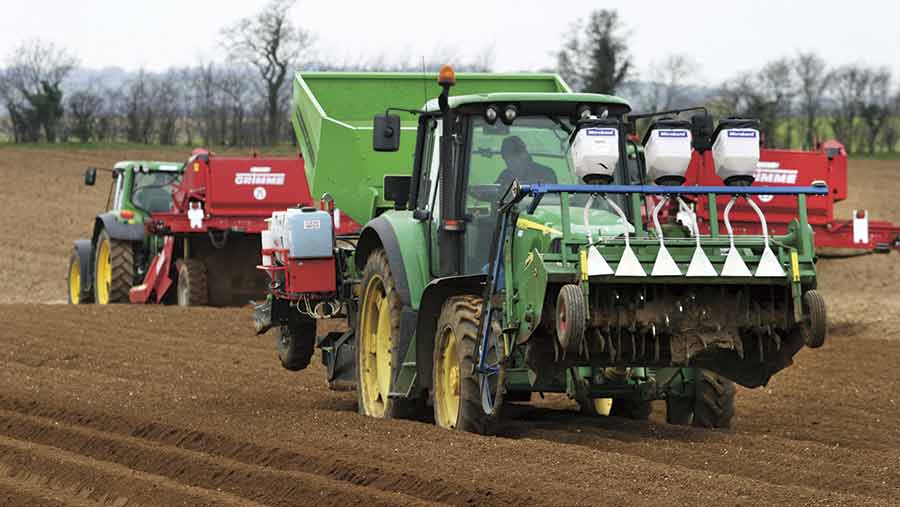 But although the farm is not inundated with blackgrass, Mr Grindling has seen an increase in the weed coming in via contractors’ combines and being spread from field margins by machinery.

And on rented land for potatoes blackgrass is often already present, so Mr Grindling has to be seen to be taking action to suppress the weed while the land is in his care.

“All we are doing is suppressing, not managing it – that’s left to the landlord really.”

Stomp, Linuron and Retro (diquat) are used pre-emergence as well as Roundup pre-planting to control grassweeds and volunteers.

“If blackgrass does come through we use Falcon (propaquizafop) or a Titus (rimsulfuron). We have a lot of niche varieties so have to be careful what we are putting on them.”

Cultivation techniques also help suppress the weed with ridging in the autumn, spraying off any volunteers and blackgrass flushes pre-Christmas if needed and re-ridging in the spring.

Potatoes certainly offer a form of cultural control, he says and when followed with maize in the rotation, which offers different chemistry, we probably get 90% control, he says.