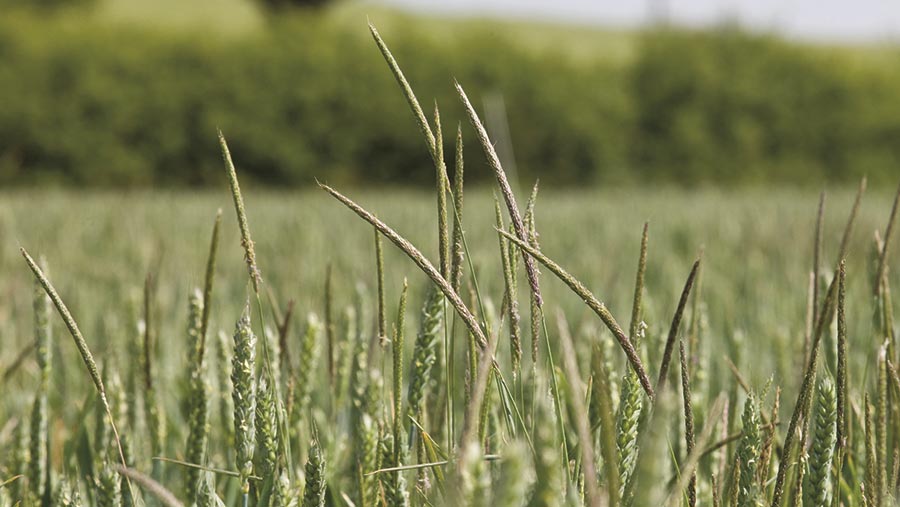 Springtime is decision time in the control of blackgrass. Cereal growers will need to assess whether weed populations are low enough to use herbicides or high enough to opt for spring cropping.

The dry autumn was ideal for many growers to delay drilling in order to control arable farming’s more serious weed, blackgrass, but some early-drilled crops are showing high populations of the grassweed.

John Cussans, weed specialist with crop consultant Niab, says growers need to get out and assess their fields and decide on the viability of their autumn-sown cereal crops.

“Growers need to be realistic. If there is still a lot of blackgrass after all their pre-emergence herbicides were applied then they need to think about whether a crop is really viable,” he says.

The spring window for blackgrass control is for cleaning up – with a product such as Atlantis or Unite – blackgrass plants that have survived the winter, rather than looking for comprehensive control of high populations of the grassweed.

Kerb carrying on doing its work on black grass while we are hiding away in the workshop away from this weather !! @wessexagronomy pic.twitter.com/IiRDR7Boxm

If there are light infestations of blackgrass, Mr Cussans suggests using the contact-acting herbicide Atlantis with a residual one added such as pendimethalin or Defy.

This approach is only advised while soils are moist enough for the residual herbicide component to work, and once the soil surface dries out then growers should be using Atlantis on its own.

Sarah Cook, weed specialist at fellow crop consultants Adas, says blackgrass is already starting to grow where she is based at Boxworth in Cambridgeshire.

That probably explains why blackgrass has become such an issue in this field. Got to get the basics right. pic.twitter.com/wTkO1NxUgH

“Blackgrass is tillering here, and with a lot of frosts breaking down soil clods and releasing blackgrass seed, there could be another flush of the grassweed,” she says.

Dr Cook suggests that growers need to assess their blackgrass levels and also test the grassweed for herbicide resistance.

“It is a hard decision for growers if they have a high population of blackgrass, because the seed return is the real killer,” he says.

Blackgrass control needs to be 97% or above to stop the weed problem getting any worse as one blackgrass head can produce a multitude of seeds.

If the weed infestation is light, then she agrees with the Atlantis-plus-residual-herbicide approach when ground conditions allow.

Many growers delayed their autumn drilling to allow them to control the grassweed, but on the other hand the dry autumn did delay blackgrass germination and pre-emergence herbicides may not have worked well.

“While it is a hard decision, spraying off a crop to prevent a bad seed return may be the answer,” he says.

If there is only a smattering of blackgrass, Mr Coombs suggests that it is importance to minimise the amount of seed which is returned to the seedbed, with gappy crops more at risk from blackgrass than thick lush crops, which may smother the weed.

His approach would be to use Atlantis and a half rate of the Bayer residual herbicide Liberator (diflufenican+flufenacet), with the first aimed at dealing with weeds present and the second at controlling those weeds yet to emerge.

The Atlantis component needs active growth from the weed to be effective but, says Mr Coombs, if it is left too late the grassweed may become too large for good control.

Stuart Jackson, cereal herbicide specialist at Unite-maker Dow AgroSciences, says growers with light infestations of blackgrass should be looking to apply a herbicide over the next two weeks.

Frost has gone, target is dry, beautiful day, first dose of round up on spring land stubbles is a go pic.twitter.com/bYYV8VpxEn

He advises using Unite, which includes the contact herbicide pyrosulam. It also includes flupyrsulfuron, which has contact and residual activity, and also has good activity against bromes and ryegrass, as well as blackgrass.

“We would advise waiting for active growth when the blackgrass is at the mid-tillering stage with the soil temperature is 8C and rising,” he says.

Ideally, growers should aim for blackgrass to have two to three days of active growth either side of the herbicide application, adds Mr Jackson.

However, if there are heavy infestations of resistant blackgrass then he agrees that growers should look seriously at spraying off the crop and looking for a spring crop replacement.

Christine Lilly, technical manager at agronomy group Frontier, reports that autumn residual herbicides appear to have worked well in her area of Lincolnshire with few reports of bad blackgrass infestations.

With many growers delaying drilling, residuals went on later than usual when there was enough moisture in the soil to give good activity from the herbicides.

If blackgrass levels are low, she agrees with the Atlantis plus residual approach, but advises growers to check the limits on the amounts of individual residuals which can be used in a season.

“The herbicide needs to go on when the blackgrass is actively growing and there are some drying days after application,” she says.

Herbicide applications are only likely to start towards the end of February when the weather is likely to turn warmer, and while blackgrass plants are small.

If growers decide to spray-off or rip-up autumn-sown crops to control blackgrass, experts highlight the need to pick the best spring crop.

They should check on the most appropriate option taking into account what residual herbicides have been used during the previous autumn. Generally a spring cereal is seen as one of the most choices.

Spring barley is the most competitive option, and many advise against beans and linseed in bad blackgrass situations as there is are limited herbicides available for these crops.

If spring cropping is chosen, then growers should look at minimum cultivations in the spring so as not to disturb blackgrass seed and encourage it to germinate.