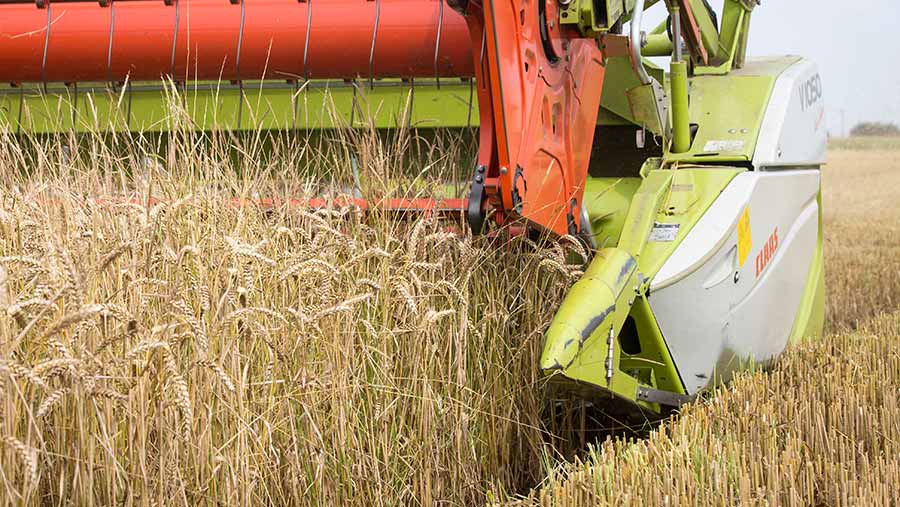 Severe blackgrass infestations are costly for farmers, resulting in large reductions in yield, as well as adding £100/ha or more to herbicide costs.

The good news is that a combination of resetting with the plough, introducing spring cropping and robust chemistry can bring rapid reductions in blackgrass numbers.

However, there comes a point when farmers need to reintroduce winter wheat to bad blackgrass fields, as it is by far the most profitable combinable crop.

See also: How an Australian approach could beat blackgrass

The stronger wheat prices may also tempt farmers to grow a second wheat, but does this risk undoing all the good work done to reduce blackgrass numbers?

Extensive trials at Agrii’s Stow Longa site in Cambridgeshire are addressing these key questions from farmers, along with many more.

Colin Lloyd, the company’s head of agronomy, gives some insights.

How many years of spring cropping are needed to deal with bad blackgrass?

“From our experience, at least three years of spring cropping is needed before reintroducing winter wheat in the rotation,” says Mr Lloyd.

From his trials experience at Stow Longa, he believes two years is cutting it fine and even after three years of spring cropping, low levels of the grassweed still remain because of the seed bank in the soil. Therefore, farmers still need to delay drilling.

For example, in the deep cultivations area that had a fallow in year 1, followed by two spring crops, there were 11 heads/sq m in the Skyfall first wheat drilled on 26 October.

However, the number of blackgrass heads was two-and-a-half times higher when drilled a month earlier (30 September). This shows how drilling early can compromise efforts to reduce the weed.

Is there a place for second wheat on bad blackgrass ground?

“Yes and no,” says Mr Lloyd, who adds that it all depends on previous cropping history and blackgrass numbers. Last harvest, the best second wheat yielded 10t/ha.

“This is a good second wheat yield for this site,” he says.

This top yield occurred on the plot that was fallowed in year 1, followed by ploughing as a reset button and late drilling (26 October) of a first wheat, so blackgrass numbers were low.

Then a second wheat (Skyfall) was established with deep cultivation, and even when drilling early (30 September), blackgrass head numbers were only 28/sq m.

But there have also been occasions when it has gone wrong. In the neighbouring plot, instead of fallow, year 1 saw winter beans followed by a first wheat in year 2 and blackgrass numbers had started to build up, particularly when drilled earlier.

“Consequently, in the second wheat established with deep cultivation, we saw 412 ears/sq m and a yield of 6.35t/ha when drilled early.”

So in conclusion, second wheats can work on bad blackgrass land, providing there is a recent history of low blackgrass numbers because of changes to cultivation and drilling date strategies. “But if numbers are building up, then avoid it, as it is too risky.”

Mr Lloyd advises farmers look at their first wheat and consider how much blackgrass there currently is and its history.

“If there are more than bits and bobs, be honest and do not risk a second wheat.”

When farmers do opt for a second wheat, he suggests drilling from the second week of October, upping the seed rate to nearer 400/sq m and growing a competitive variety such as Skyfall to help smother the weed.

Can winter beans be an effective blackgrass reset button?

“Again yes and no. In one of the plots, we grew winter beans after a second wheat. The beans cleaned up nicely and we saw 1-11 heads/sq m of blackgrass in the following late-drilled wheat crop.”

Blackgrass numbers were low and there was a valuable yield lift from the nitrogen fixed by the pulse crop in the following first wheat, which yielded 10t/ha.

But again, it can go wrong. In field 4, winter oats were followed by winter wheat drilled early in year 2 and then winter beans in year 3 (harvested 2017). The dry spring last year caused stunting of the beans, especially in the strip-tilled plot following a catch crop.

“This enabled blackgrass to flourish and all of a sudden, we lost yield and the blackgrass got worse,” he says.

Deep-cultivated beans had 109 blackgrass heads/sq m and in the following wheat, this had risen to 143 heads/sq m.

In conclusion, Mr Lloyd says winter beans can be effective as a reset in the right place.

“When it does go wrong and you are seeing lots of blackgrass, you have to stop and do something different.”

It could be a case of ploughing and then drilling a spring crop. “It is not going to get better and can’t view it as bad luck.”

Can winter cereals be sown before mid-October on bad blackgrass ground?

The answer for wheat is no. But winter hybrid barley drilled on 30 September delivered 9.5t/ha this year and saw 46 blackgrass heads/sq m. Again, there was no history of rising blackgrass levels.

However, this good yield may tempt some farmers to go for another winter barley.

“This was a question that several farmers asked at our open days last year, so we had a look this year,” Mr Lloyd says.

Half of the block of direct-drilled Sunningdale hybrid barley followed spring oats, with the other half after Belfrey hybrid winter barley.

The second barley achieved 7.76t/ha with 253 heads of blackgrass/sq m, while the crop following spring oats yielded 9.54t/ha with only 46 heads/sq m of blackgrass.

“So the answer is don’t be tempted to go back after a good barley crop, as it will cost you 2t/ha of yield and you will have a worsening blackgrass population.

“You can never beat blackgrass, instead farmers have to learn how to live with it.” 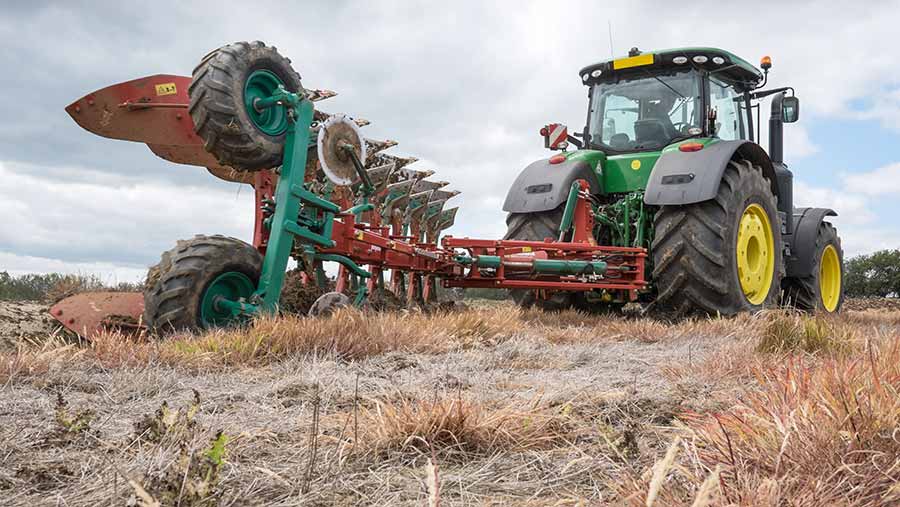 Yes. Looking at the two-year combined margins, some of the worst plots made a loss and this is where lots of farmers with a really bad blackgrass situation currently are.

“They are struggling to make it stack up,” says Mr Lloyd.

However, the best plots earned £1,320/ha. “So you can go from a loss to a return in a short time by making the rotational changes.”

The highest margin was from two consecutive spring crops of Explorer malting barley. Also putting in a good performance is Wizard beans followed by Edgar wheat at £1,000/ha.

“Beans may look unattractive on their own, but it sets things up for a good first wheat, at levels that can make money,” says Mr Lloyd.

Also, a simple change in drilling date can lead to savings. Early versus late drilling of wheat alone can make a £100/ha difference in herbicide spend and this adds up across the wheat area.

Agrii’s Stow Longa blackgrass trials site was established in 2000 with cultural control trials starting in 2004, just one year after the launch of Atlantis (iodosulfuron + mesosulfuron).

Colin Lloyd, who has overseen the trials from the start, recalls that being an acetolactate synthase (ALS) inhibitor herbicide, there could be future resistance issues with this key herbicide, hence the cultural control work from the early days at this site. 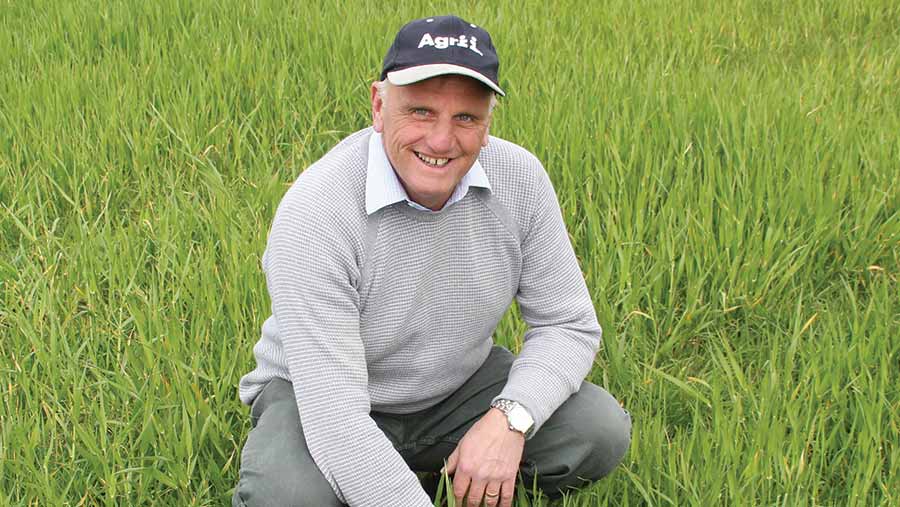 The heavy land farm near Huntingdon has resistant blackgrass, with a starting population of more than 500 ears/sq m. This was down from 1,500 ears/sq m in the untreated plots in the first herbicide trial in 2000.

Initially, the trials work investigated many different combinations of chemistry.

In 2010, the emphasis turned to further cultural control, looking at cultivation strategies over a five-year experiment in a 6ha block. In 2014, the current rotations work started and this is now in its fourth harvest.

The site consists of six 1ha blocks of cropping and the current five-year trial is investigating the effect of rotations. Each block is split in three, with different cultivations (plough, direct drilling after a catch/cover crop and a deep one-pass cultivation to 20cm, which is achieved by various machines – for example TopDown, typically used on many farms).