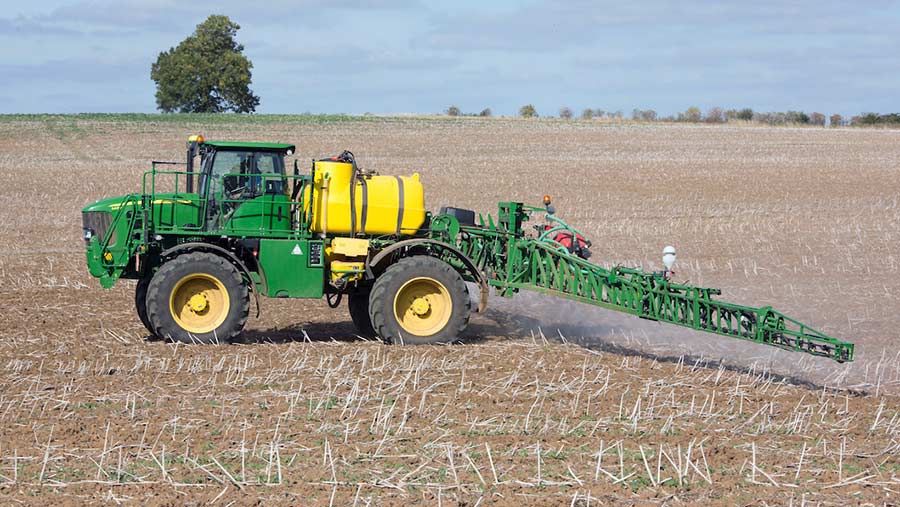 There is still time for farmers to help prevent the development of glyphosate-resistant blackgrass, which one expert believes is just a few years away.

Many of the ingredients are in place for this to happen in blackgrass in the UK, believes Paul Neve, senior research scientist at Rothamsted. He recalls a similar situation in Australia with ryegrass in the late 1990s.

Back in 1997, there was no reported resistance to glyphosate anywhere in the world despite being used for 20 years. However, in that year it went wrong, with the first weed being resistant to a “once-in-a-lifetime herbicide”.

Globally, there are currently 40 weed species with glyphosate resistance. There are six different mechanisms for glyphosate to evolve resistance and it is the fourth most resistance-prone active globally, Dr Neve said at the recent Association of Independent Crop Consultants conference.

Therefore, he warned that glyphosate resistance is likely to evolve in UK weed species.

Dr Neve highlighted Australia, which is where the first glyphosate-resistant weed was discovered in 1998 in ryegrass.

“Post-emergence in-crop options were no longer working on ryegrass and it was a similar situation to what is happening in the UK now with blackgrass.”

There is, therefore, an opportunity for the UK to learn from Australia and help prevent it happening here.

A key question is what had changed in Australia that the UK could learn from? Dr Neve believes there are four factors that led to the emergence of glyphosate resistance:

Australia responded by setting up a working group that promoted best practice to reduce the risk, including the double-knock (glyphosate + paraquat) approach.

Today, there have been 700 documented populations of glyphosate-resistant ryegrass, but Dr Neve added that many tens of thousands of farms are still successfully using glyphosate on ryegrass, although resistance remain a growing problem.

So with Australia in mind, there are worryingly similarities here in the UK with blackgrass resistance to post-emergence herbicides, a move to later drilling, adoption of no-till plus an increasing use of glyphosate – doubling in the past 20 years.

Another potential sign is the differences in blackgrass sensitivity to glyphosate. While full-rate glyphosate still gives good control (there is no resistance in the UK), there is a twofold difference in glyphosate sensitivity.

Adas weed researcher Laura Davies said in one of her trials, applying low doses (below field rates) over the years led to a decrease in sensitivity, therefore highlighting the theoretical potential for resistance to develop.

In conclusion, while Dr Neve believes blackgrass could go the same way as ryegrass in Australia, there is an opportunity to be more proactive and  address the key triggers.

To find some answers, Adas is running a five-year project, funded by the AHDB, looking at ways to reduce risk when making repeated glyphosate applications to stubbles.

Factors being examined include dose, size of plants and post-spray cultivations.

The first year of results showed the full rate of 540g/ha of glyphosate at growth stage 12-13 gave the most effective kill while minimising resistance risk.

Adas is offering farmers a free test for glyphosate-resistant blackgrass. Farmers with a suspected case should contact Adas  by email at weeds@adas.co.uk

How to prevent glyphosate resistance in blackgrass

For more information, download a PDF of the AHDB information sheet or visit the AHDB/Weed Action Resistance Group website.

The experts were speaking at the recent Association of Independent Crops Consultants (AICC) conference held near Towcester. The AICC has more 250 members representing 50% of the UK arable advice market.
See more
Share this
Advertisements