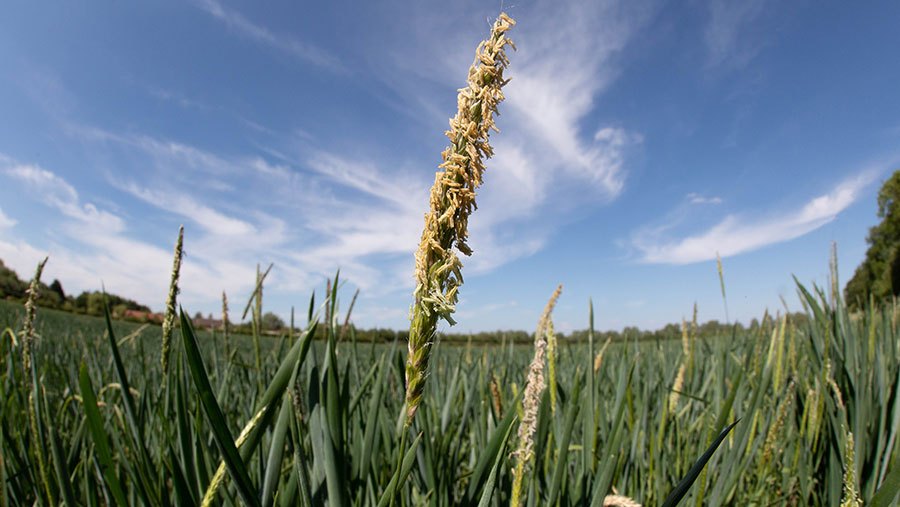 Sarah Cook, grassweed specialist at crop research firm Adas, says heavily infested blackgrass areas should be mapped out and targeted quickly with an application of glyphosate to avoid future issues with weed numbers.

Viability testing of weed seed heads at the Syngenta Barton Blackgrass Innovation Centre, near Cambridge, has shown considerable variation in seed viability this season, with up to 23% of seed already viable.

See also: How to sample blackgrass for a herbicide-resistance test

Some heads, however, have yet to show any viable seeds, with an overall average of 7% viability, which Dr Cook believes gives an accurate representation of the blackgrass situation across the eastern counties.

“Continued hot, dry weather means we expect to see the results from viability testing accelerating. With the range of viability we’ve seen, growers can still have a beneficial effect, but it’s important to not leave it too late,” she says.

She explains that the weather during “Wimbledon week” are typically considered to define rates of blackgrass seed dormancy, but recent weather conditions could set dormancy two to three weeks earlier than usual this year.

“With the forecast settled for continued hot and dry weather for the foreseeable future, the early indications are for a relatively low-dormancy year – which has implications for cultivation, establishment and herbicide options,” she says.

Grassweed experts at the company will continue to monitor and report seed viability over the coming weeks, followed by dormancy testing of seed, to provide growers with an update of the challenges which may face them this autumn.

“Pay attention to application rates, water volume, use of adjuvants and nozzle choice to hit weeds as effectively as possible. But above all, the key is timing to minimise the risk of viable seed set,” she concludes.