Spring hand-roguing of blackgrass is helping one Nottinghamshire cereal seed-producing farm to get on top of the troublesome grassweed along with a comprehensive autumn herbicide programme.

Mary and Rob Smithson’s 600ha farm in Beckingham, south-east of Doncaster, grows 240ha of winter wheat for seed, so there is a zero-tolerance policy of the grassweed.

“As all the wheat is grown for seed, the farm has a general philosophy of clean crops, and attention to detail in the worst-affected areas is paramount when aiming to eradicate blackgrass,” Mrs Smithson tells Farmers Weekly. 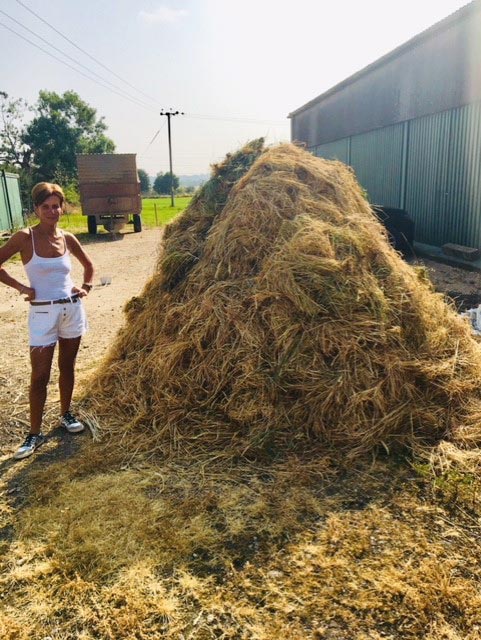 Mary Smithson with a pile of hand-rogued blackgrass

Therefore, a solid herbicide programme is applied in the autumn, followed by thorough roguing and spot-spraying in the spring.

Delayed drilling and the farm’s combination of cultural and chemical control are reducing blackgrass numbers each year, although there are limitations on the use of glyphosate as a seed producer.

Agronomist Graham Chester works closely with the Smithsons and advises that early control from stacked herbicide chemistry is vital to give good blackgrass control for autumn-sown crops.

Mrs Smithson’s husband flies over the crops in a friend’s helicopter to assess the weed burden and estimates the area that is infested and so prepares for roguing in the spring.

She hopes that this hard work and determination will have a positive effect on head counts next year and sees this roguing policy as key, especially if regulations tighten on the use of glyphosate in the future.

In one 14ha field, last year’s roguing saw the blackgrass-contaminated area fall from 3ha to 0.8ha, and Mrs Smithson says the reward is looking over clean crops and realising the weed burden is depleting each year.

The positive feedback the family team receive from neighbours and seed merchants gives them confidence that their hard work is paying off as they strive for total blackgrass elimination on the farm.