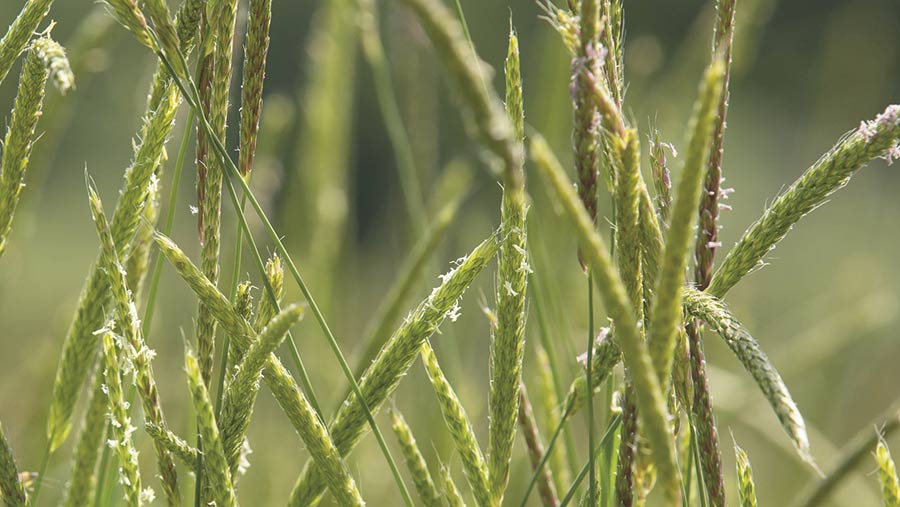 Blackgrass is one of biggest weed challenges that growers face, especially those with farms where autumn-sown, cereal-based crop rotations have been the norm.

A prolific weed in England, which is spread entirely by seed, it also occurs across much of western Europe, in cooler, damper regions.

Many farms have now reached “tipping point” with blackgrass numbers. The dominance of autumn-sown crops, often established with minimum tillage in September, and the high frequency of herbicide resistance means that blackgrass is an increasing problem in the UK.

“With grassweeds, it is possible to create your own problem,” says weed biology specialist John Cussans of Niab Tag.

“Blackgrass has an early autumn emergence pattern, so many popular farming practices have encouraged the weed.”

Farmers trying to bring blackgrass numbers down must stick to their control strategies, he urges.

“There’s no blueprint, but there is a need for integrated control measures, which are used every year in every affected field.”

This is especially important because there are no new methods of control on the horizon, he warns.

“You have to use existing methods as effectively as possible and continue with them for several years.”

Blackgrass is propagated solely by seed. In winter crops, it will produce between two and 20 heads/plant, with each head containing about 100 seeds.

As a result, weed populations can build up very rapidly and may increase by more than tenfold in a year. For this reason, preventing seed return can be a big help in reducing populations.

Most of the seed is shed between June and August, ahead of harvest. Of these, up to 60% will be viable. Blackgrass seed has a fairly short period of dormancy, lasting several weeks, although this is reduced if they mature in hot, dry conditions.

Survival of seed buried in the soil is about 20-30%/year, which means that only about 1-3% of the seeds will still be viable after three years. As independent weed scientist Stephen Moss points out, the only weakness of the weed is its seed life.

“There’s a 74% decline per year,” he says. “So it is possible to run down the seed bank with the right approach, but it can’t be done overnight.”

He recommends a five-year approach. “This is how long it takes to reduce the seed burden in the soil. But you have to minimise new seed production in that time.”

Blackgrass can only emerge successfully from seeds found in the top 5cm of soil, which is why greater use of minimum tillage has encouraged the weed.

With sufficient moisture, about 80% of blackgrass emergence occurs in the months September to November – often coinciding with the emergence of the crop. 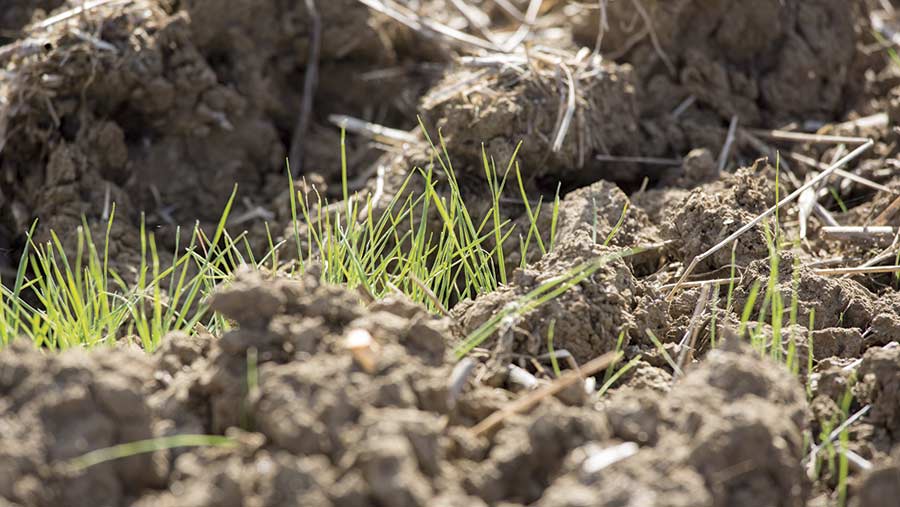 This emergence pattern means that much of the control has had to be done in the winter crop, which is why there was an over-reliance on herbicides.

Today, the loss of existing chemistry, a lack of new herbicides and increasing levels of resistance mean that other control methods are becoming increasingly important.

Factors encouraging the spread of blackgrass:

Achieving the levels of control needed (97%) to get on top of blackgrass is not possible with herbicides alone.

As a result, more non-chemical control methods have to be used, in combination with herbicides, to improve overall control.

On their own, they are not enough to bring levels down, so every effort must be made to integrate their use.

The main non-chemical methods available to growers are:

Delayed sowing of winter wheat by three weeks, from mid-September to mid-October, will reduce blackgrass infestations by 33% on average. It allows weed seedlings to emerge and be controlled with glyphosate before drilling.

Another benefit of a later sowing dates is that residual herbicides are more effective when applied in these crops, because soil conditions are more favourable for good activity.

More balanced rotations, including spring crops, are needed where blackgrass is causing problems. Spring cropping has shown to give 88% control and can be used to reduce weed numbers considerably. It is more effective than delayed drilling.

In terms of crop choice, spring barley is more competitive than spring wheat. Establishing spring crops can be difficult on heavy soils, so the right cover crops could be appropriate for this situation.

Ploughing reduces the risk posed by blackgrass by burying freshly shed seeds to a depth from which they are unlikely to emerge. Done on a rotational basis, every four or five years, it requires good soil inversion and is often best achieved before spring crops. 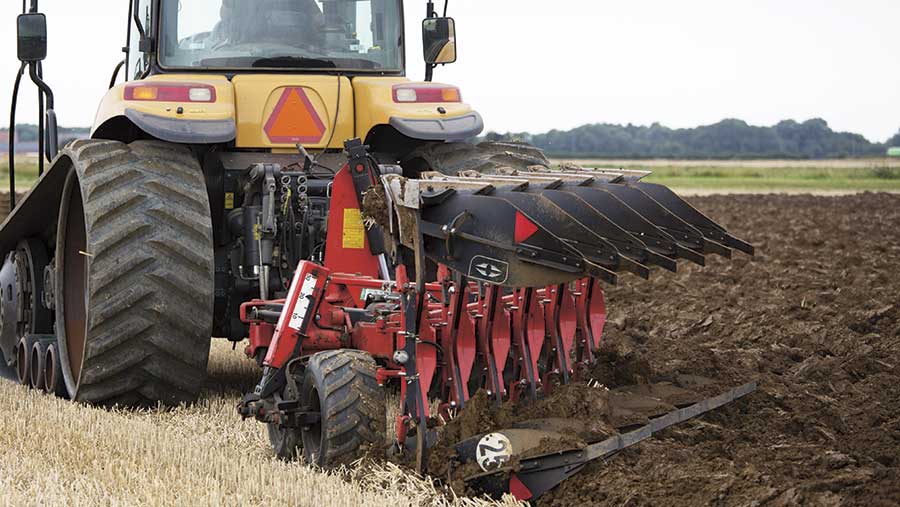 On average, ploughing has given 69% control of blackgrass.

In contrast, shallow, non-inversion tillage tends to favour blackgrass, as the seeds are retained in the surface soil layer.

Competitive crops are able to suppress weeds. The best way of making use of this effect is to use higher seed rates, so that you get in excess of 300 plants/sq m.

Preventing seed return can be done in a number of ways. On some farms, fallow or grass leys have been used for two years, to bring high infestations down to acceptable levels. After two years, less than 10% of seeds are likely to remain.

Spraying off patches of blackgrass with glyphosate in the first week of June will prevent viable seed return.

For best results, it may be necessary to spray the same area for two to three years. Cutting, or spraying either in May or later in June, won’t work as well.

Do everything to minimise the spread of seeds in combines, balers and cultivation equipment. Hand rogueing is feasible where populations aren’t too high.

Pre-emergence herbicides, applied in good conditions, can still give good levels of control in cereals and are much less affected by resistance than post-emergence products.

The use of stacks and sequences of these products has been successful for many growers, especially where populations aren’t too high and applications are made in good conditions. 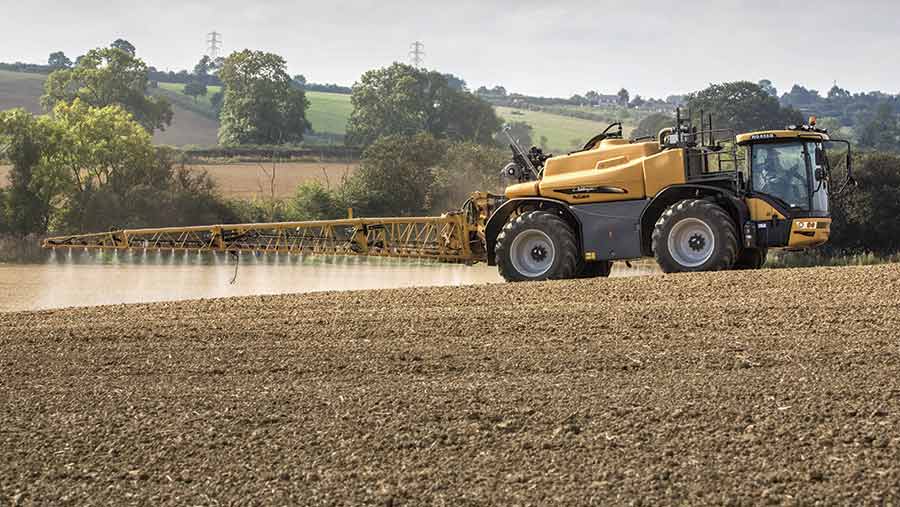 For any soil-acting herbicide, seed-bed preparation is important. Chopped straw or crop residue should be buried, or spread as thinly as possible, following cultivation.

Dr Moss advises growers to experiment to find the best pre-emergence products for their farm, as well as the ones to give up.

“That may mean spraying alternative tramlines of Crystal [flufenacet + pendimethalin] and Liberator [diflufenican and flufenacet], to see which performs the best,” he says. “For some unknown reason, there are differences between farms.

Flufenacet – available as a straight or in mixtures and most effective when applied pre-emergence of the blackgrass, where it gives the best start to a planned programme

Pendimethalin – a residual herbicide that should be applied pre-emergence for optimal blackgrass control. High levels of enhanced metabolism resistance will reduce its efficacy

Flurtamone – provides an alternative mode of action for blackgrass control and is only available in mixtures, which should be applied pre-emergence of the blackgrass

Flupyrsulfuron – a sulfonylurea herbicide that is active by both root and foliar uptake, but with limited residual activity against blackgrass. Applied pre-emergence, in a tank mix, it can provide additional control

Diflufenican – applied in a tank mix or co-formulation with a residual herbicide, it can add 5-10% control

Mesosulfuron – a sulfonylurea herbicide for the post-emergence control of grassweeds, available in mixtures with iodosulfuron. Like all acetolactate synthase (ALS) inhibitor herbicides, resistance exists in blackgrass populations and strategies should be implemented to prevent further build-up

Pyroxsulam – another ALS-inhibiting herbicide for the post-emergence control of grassweeds, available in mixtures, for enhanced control. Contact acting, so apply early post-emergence

Pinoxaden – foliar applied, translocated herbicide that is also affected by resistance and give moderate control of blackgrass in wheat. It an option for post-emergence control in barley