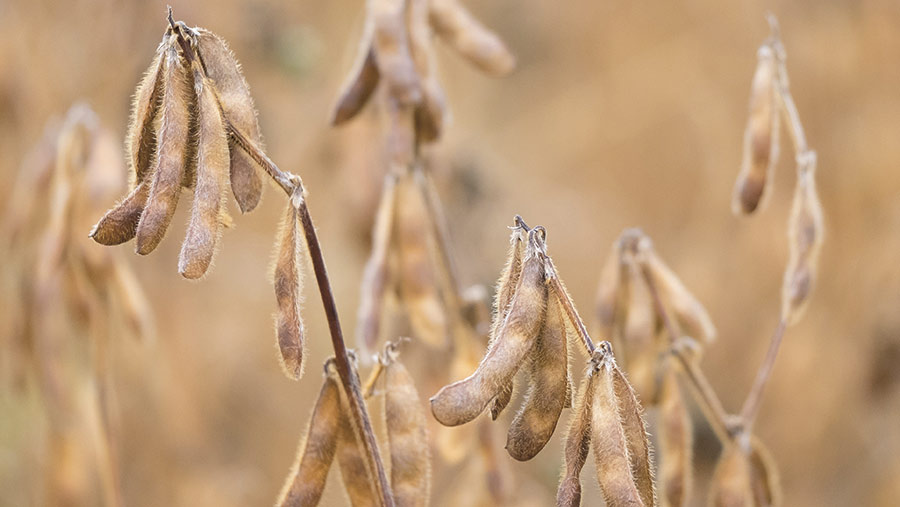 Kent grower Mark Izard is expanding his soya bean area to 40ha this season, as the crop cements its place in the farm’s rotation after a pleasing first harvest.

Burdensome blackgrass is creeping on to Mr Izard’s mixed farm in the Kent Downs, roughly five miles south-west of Canterbury, and cropping decisions are now starting to be influenced by the grassweed.

He farms about 200ha of mostly sharp, flinty clay soils over brick earth and a further 400ha on contract, growing winter wheat, oilseed rape, winter oats, winter and spring beans and a small amount of triticale.

A swing to spring cropping has seen prices tumble for default options such as spring barley and beans, but 2017 prices for soya beans stand at about £400/t, which includes a £30/t premium for non-genetically modified (GM) beans.

The size of the UK soya crop doubled to 400ha in 2016 and after initially being recommended to him by his agronomist, Mr Izard contributed to this surge after buying seed of the Ukrainian variety Vilshanka and sowing 34ha last season.

The UK crop area could grow to 2,000ha next spring as soya becomes an attractive option for those who already grow other pulses, not to mention growers who are frustrated by the big costs and high stakes of growing oilseed rape. 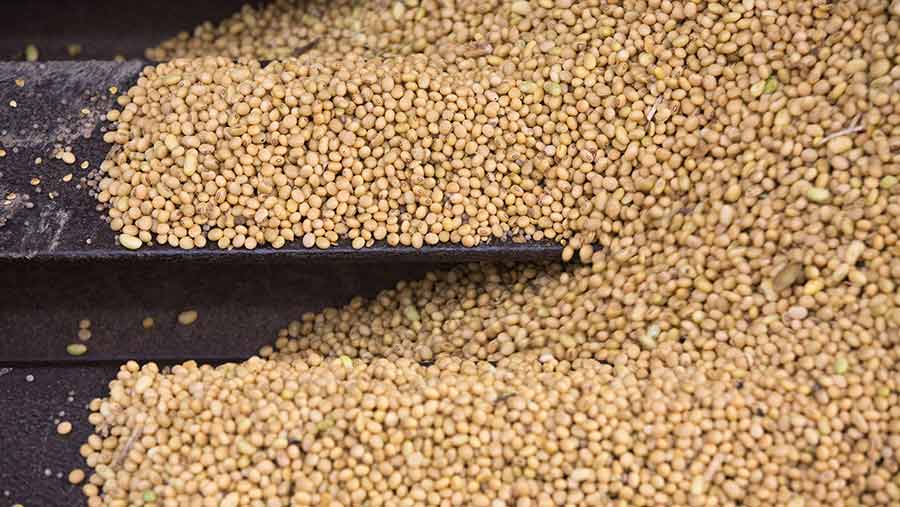 Mr Izard describes the crop as “very interesting” to grow and although he doesn’t see himself ever growing vast areas of soya beans, it now has a role in his rotation to deal with encroaching blackgrass.

“Because it is a later harvest, you won’t want to grow a huge area of it, but it does have a place in our rotation,” explains Mr Izard.

“Otherwise we try to concentrate on winter cropping, so we will target soya on blackgrass fields to improve the situation.”

Having never grown the crop previously, Mr Izard and his team needed to do some things differently compared with growing a conventional bean crop.

When drilling in April and early May, sowing depth is critical because soya plants have a pre-determined length of stem before the cotyledon leaves unfurl.

If the seed is drilled too deep it will try to unfold while the plant is still under ground.

The maximum sowing depth is about 4cm – much shallower than other bean crops. This does leave crops open to bird attack and Mr Izard says getting a quality seed-bed with good soil moisture is critical to overcoming this.

“You’ll be planting so late, the last thing you want to do is cultivate too much and lose soil moisture by going too deep. I cultivated seed-beds in March to avoid this, then drilled in the first week of May with a Vaderstad Rapid disc drill.

“In hindsight, we should have been a bit braver and drilled in late April, but we were still getting the odd frost, and soil temperatures need to be above 8C.” 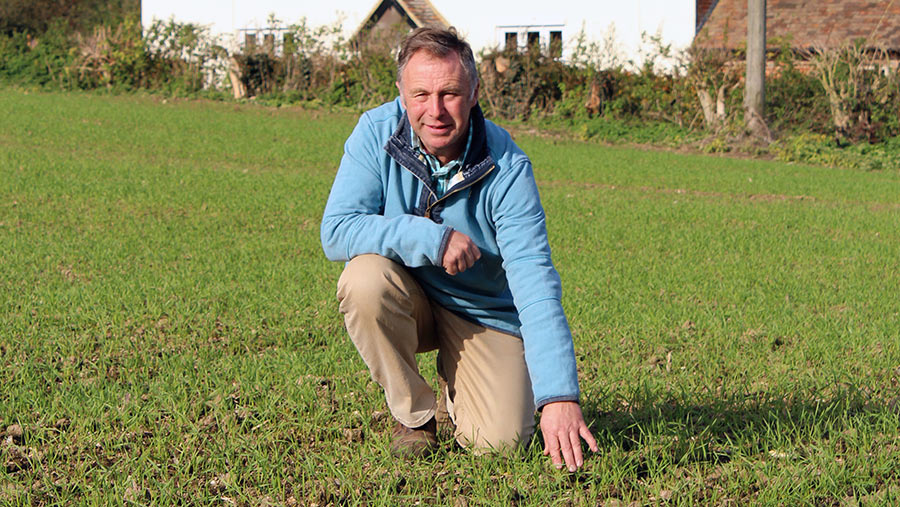 Soya doesn’t fair well with more than a little frost and is similar to growing maize in terms of soil temperatures and drill date, he adds.

Being on fairly flinty ground, fields were rolled after drilling. Mr Izard found the seed can be quite sensitive to this, with germination affected in the slightly wetter areas on the headlands.

Once the crop emerges, he says there is about a month’s worth of pigeon control to do, as the winged pest loves to graze the plants through the cotyledon growth stage.

One of the key virtues of soya beans is that it is a very low-input break crop, with a single fungicide spray of Amistar (azoxystrobin) used to control sclerotinia in a contract-farmed block of the crop.

Having such a late-sown crop presented Mr Izard with a golden opportunity to spray off four flushes of blackgrass in fields laden with the yield-strangling grassweed before bringing the drill out. He made the decision to not apply a pre-emergence herbicide as a result.

Post-emergence weed control was achieved with a half rate of the sulfonylurea herbicide Pinnacle (thifensulfuron), which can be used on soya even though it is a legume, with Centurion Max (clethodim) deployed for any further blackgrass flushes.

Soya crops in Britain are typically ready to harvest from mid-September to early October and while this may put some growers off, Mr Izard points out that it is no later than the maize harvest.

Having grown linseed in the past, he says it can be combined earlier than this. He desiccated the crop two weeks before it was cut on 2 October because conditions were good. However, Mr Izard believes the combine could have possibly rolled in a week earlier.

“We had a slow start to the year because the spring was so wet and cold but it will always be last to harvest, a few weeks after we finished cutting spring beans in our case.”

He explains that the crop produced a dense canopy in early summer and by late-July it was very green still and he was concerned that it would not be ready to cut in late September.

Suddenly in early-September the crop turned yellow and the leaves dropped off. At this point, it sucks all the nutrients from the leaves and fills the pods. 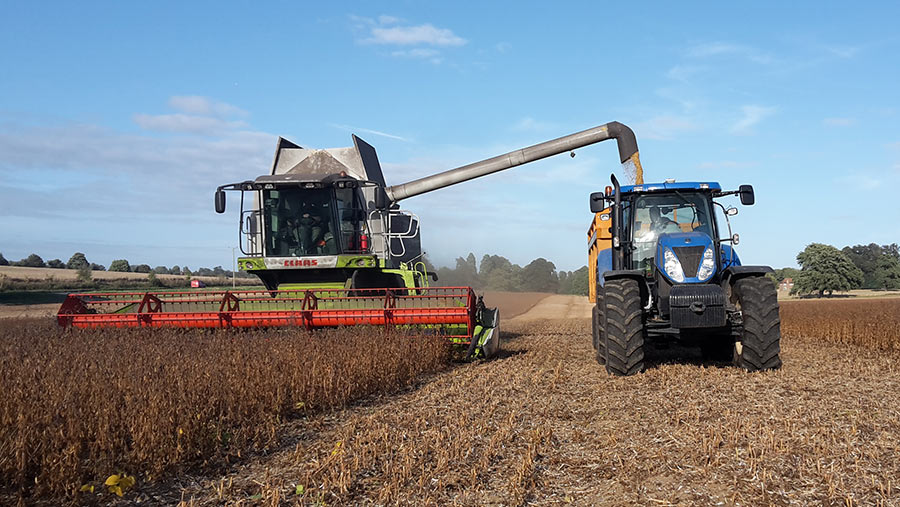 “You need to have the combine header very low because the pods go right the way down the main stem,” he adds.

“We took all the lifters off the header to get a bit lower and it was all standing well anyway, so we didn’t need them.”

That’s because one of the main advantages of growing soya over other beans is that it doesn’t lodge, as the stems are very thick and the pods don’t shatter.

Mr Izard adds that the crop root structure is incredibly fibrous and he thinks it leaves the soil in a good, friable condition for direct drilling.

“It was very straightforward to drill wheat into the stubbles this autumn and because soya is supposed to fix twice as much nitrogen as spring beans, hopefully there will be a benefit there.”