A farm-based blackgrass trial has proved it is possible to grow spring cereals to hit brewing and milling specifications on heavy fenland soils, while dramatically cutting blackgrass seed return at harvest.

At the start of the 2015-16 season Farmacy agronomist Alex Richardson took over a 12ha field on his father’s 400ha fenland farm, which is mainly made up of deep marine clay land near Pointon, 16 miles east of Grantham.

This chosen block was one of the worst fields on Cobthorne Farm, plagued by eye-watering levels of blackgrass with triple-R resistance, meaning herbicide efficacy is severely dented.

The only way forward was to deploy cultural methods of control together with spring cropping, says Mr Richardson.

“We started out with over 1,200 blackgrass plants/sq m following oilseed rape. Had winter wheat followed this it would have had to be sprayed off. In this trial we are trying to influence space, seed-bed moisture and consolidation.”

The field was divided into sections that were either ploughed or shallow cultivated with tines or discs. The farm-standard cultivation practice of shallow discs and subsoiler legs was also included in the comparison.

Watch the video below for a video recap showing what has been achieved at the trial so far.

Shallow cultivation with a low-disturbance subsoiler leg to ease compaction was found to be the most suitable way of managing blackgrass in the autumn.

The field was split 50:50, drilled with spring barley variety Explorer and Mulika spring wheat, following a range of cover crop species, which were established primarily for overwinter soil conditioning purposes on half of the plot.

“Multispectral infrared drone images taken in July showed there was significantly less blackgrass in the cover cropped areas due to soil binding from dead cover crop roots, leading to lower disturbance when drilling compared with non-cover cropped areas. There was less disturbance between the rows,” says Mr Richardson.

Spring barley and spring wheat were drilled on 8 April at three rates – 350, 450 and 550 seeds/sq m – with 60% establishment achieved across the field.

Mr Richardson found 450 seed/sq m was best for spring barley to compete with blackgrass and hit the highest yield.

Taking the rate up to 550 seeds/sq m caused lodging problems on the ploughed section of the field because of inherent higher nitrogen mineralisation.

Plants were more leggy as a result and were closer together, ultimately meaning the roots didn’t anchor into the soil as well.

On average, the spring barley yielded 8.4t/ha across the field when cut on 14 August. 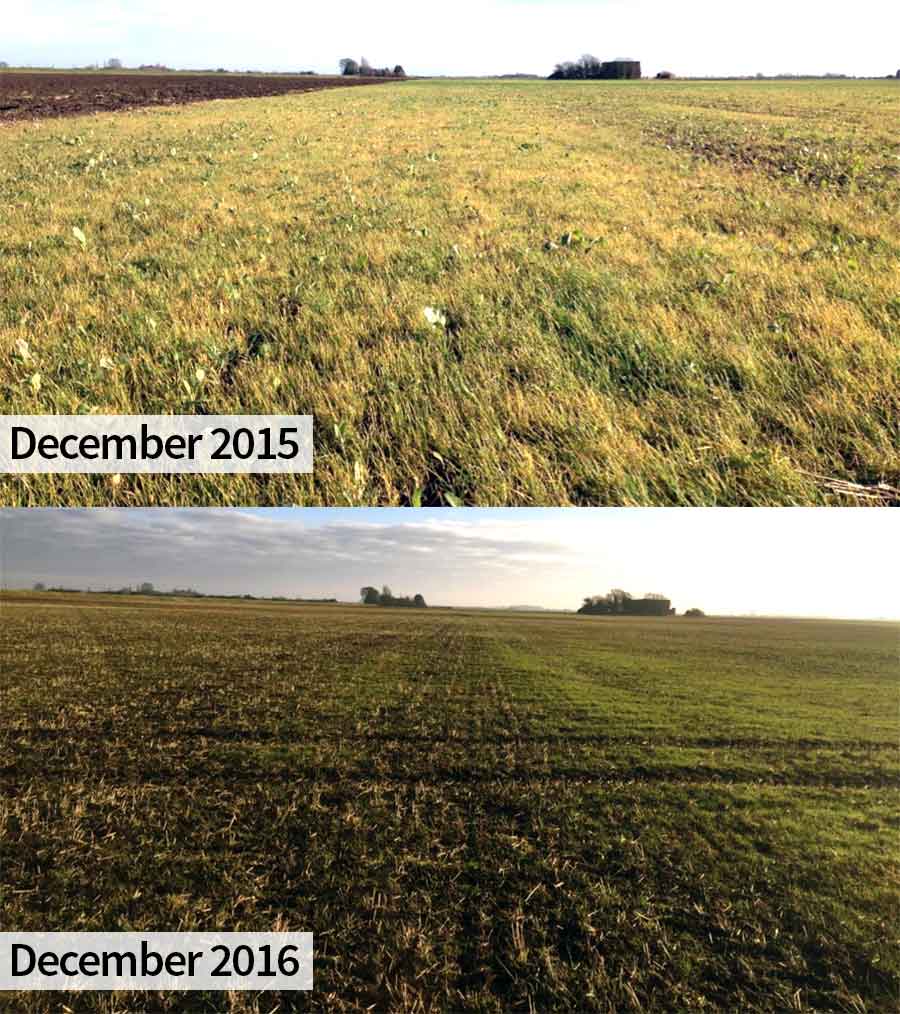 The trial field on its third blackgrass flush in 2015 (top), compared with one year later (bottom) after spring cropping

By far the most significant figure to come out of the trial at the end of the first season was that blackgrass head counts showed that spring barley saw 90 times less weed seed returned at harvest compared with winter wheat.

Because spring wheat is less competitive compared with spring barley, drilling the Mulika at the highest rate of 550 seeds/sq m was best for blackgrass control at 60% establishment.

Combined on 7 September, the spring wheat crop yielded a respectable 8.75t/ha on average across the three different seed rates.

“Spring barley is better than spring wheat for smothering blackgrass but spring wheat still has a role to play, especially when you consider the gross margin and the implications of growing winter wheat in a field with this level of blackgrass,” says Mr Richardson.

“We have learned a lot and it shows that you can grow spring wheat and spring barley on this soil type, hit the right spec for milling or malting and achieve a decent gross margin.” 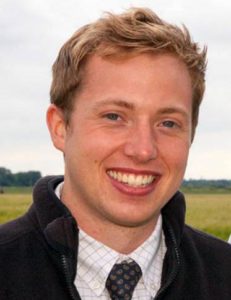 Spring crops need a good start in life, so the plan this spring is to focus on managing spring crops nutritionally, experimenting with the use of starter fertiliser placed at drilling and playing with the ratios of various nutrients to best suit the crop based on soil analysis.

A comparison of four spring barley and spring wheat varieties will also take place, giving newer varieties a try against some old favourites.

Spring barleys Propino, Laureate, Irina and Planet and spring wheats Mulika, Willow, Kilburn and Cochise will be grown side to side this season to compare growth traits, yields and ability to block out blackgrass.

“As a farm approach, more spring cereals are being grown as a change in overall rotation to keep blackgrass levels down.

“After a second spring cereal on the trial we will hopefully be able to establish a late drilled autumn crop next season,” says Mr Richardson.

However, he emphasises that a blackgrass headcount this summer will influence cropping choice for next season decision making.