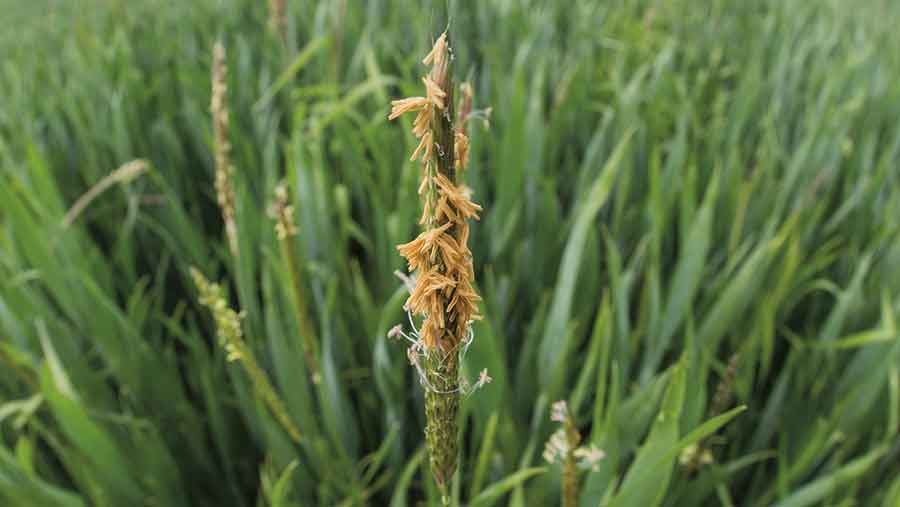 Spring cropping, cover crops and improving soils are all on the possible menu to lead the fight against blackgrass on one Somerset arable farm.

Two weed experts were called in to try and improve control as blackgrass has steady got worse in the arable areas of west Somerset and Dorset to rival problem areas further East.

Nathan Hopkins farms 1,240ha of combinable crops from Sutton Farm, near Sutton Montis, six miles north east of Yeovil, where blackgrass is endemic across his silty clay loams, and he spends upwards of £160/ha on herbicides.

“We have an inherent problem and we need to reduce the blackgrass weed burden to protect farm yield and margins,” he says.

The farm’s herbicide bill is expensive, especially on the heavy blackgrass areas, and Mr Hopkins says the farm needs to do everything it can to maximise the efficacy of its weed control products. 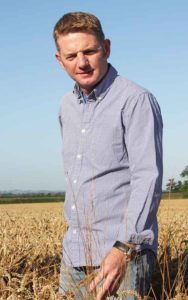 He adds that the farm inherited blackgrass problems as it expanded from 160ha a decade ago, and with herbicide-resistant blackgrass on the farm it has become more difficult to control.

Dr Cook believes that drastic policies are need to eliminate blackgrass seed return and suggests that heavily infested fields should ideally be left fallow or cover cropped for at least one season.

The economics of this approach is not always viable, so Dr Cook suggests a further option is to increase the area of spring cropping, perhaps including two spring crops back-to back.

She favours spring wheat as this crop has given good results, but in a bad year when drilling is delayed, yields can quickly fall.

One solution is to establish a cover crop such as black oats which can draw moisture out of the ground and allow spring wheat to be direct drilled earlier.

Dr Cook says the problem is that winter cereals still give reasonable yields even with heavy blackgrass infestations and growers are reluctant to adopt more radical solutions.

“One of the field at Sutton Farm was yielding over 8t/ha of milling wheat despite the blackgrass. However, without that level of infection, it could have produced 10 or even 12t/ha,” she says.

Dr Cook suggests drawing up two budgets – one for areas with bad blackgrass and realistically reduced yields, and another one to include uncropped or spring cropped areas with better yields. She says the results might surprise.

Mr Fuller of 2Excel BioSystems says that as blackgrass thrives in cold and wet soils, anything to improve aeration and porosity will disadvantage blackgrass and encourage more competitive crops. 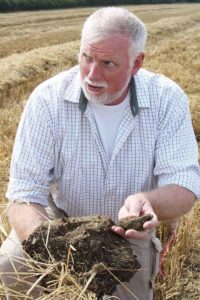 He says the silty soils can be more difficult to manage than heavy clays but that the farm’s cultivation policy backed up by regular ditching, mole ploughing and the use of biosolids appears to be working well.

“I would question whether some of these fields are being subsoiled too soon. A few inches down, the soil remains wet – it will smear and could make the problem worse. But it is difficult to get the timing right on such a large arable area,” he says.

The underlying farm soil is magnesium dominant, which binds the clay particles tightly together, holding more water and locking up potash, so applying gypsum will reduce the binding power between the clay particles.

This will produce a crumb structure from the surface downwards, while calcium-rich biosolids will help over time, adds Mr Fuller.

Targeting phosphates, through placement fertiliser or as a seed dressing, will drive crop root mass without feeding the blackgrass. This will give a more competitive crop and will leave more root mass after harvest, helping soils to remain open for longer.

Mr Hopkins says the farm has made good progress with its soils and repeated biosolids use has raised phosphate level in some areas, but he would not be against implementing some of Mr Fuller’s suggestions.

“I’ve not questioned soil health in terms of crop performance, but I can see how some of these measures will help the wider blackgrass picture,” says Mr Hopkins. 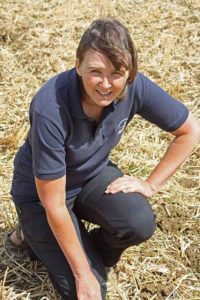 ourage a chit, and the operation is repeated two or three times.

“We don’t want to become too reliant on glyphosate. However, we will apply it if there is a big flush after raking and before drilling,” he says.

Spring cropping has been increased, with beans and barley slotting in after winter wheat, and this gives the farm more time to control blackgrass.

Spring beans are not the most competitive plants, but increasing the seed rate and applying full-rate Nirvana (imazamox + pendimethalin) has kept the crop almost free of blackgrass this year.

Minimum disturbance cultivations were introduced two years ago on heavy land prone to blackgrass, using a Sumo LDS (low-disturbance subsoiler) ahead of a Sumo DTS strip tillage drill, which creates a seed-bed only around where the seed is sown.

“The aim is to keep as much blackgrass seed as possible on or near the surface, where we can manage it better. We don’t want it emerging later from depth, and we don’t want to risk bringing up old but viable seed,” he says.

Variable rate technology allows more seeds to be sown on heavy land areas to help shade out blackgrass. The Sumo drill also leaves an excellent finish which helps the farm get the best from its pre-emergence herbicide programme.

Pre-emergence herbicides include full-rate flufenacet plus diflufenican and prosulfocarb, which are applied back to back with Avadex (tri-allate). Stomp Aqua (pendimethalin) plus Atlantis (mesosulfuron and iodosulfuron) are applied post-emergence when the blackgrass has two leaves.

BASF’s agronomy manager for the South West, Paul Haynes, says the farm has employed proven tactics, which have worked well so far, but he suggested the meeting with the two experts to improve control.

“To turn the problem around, we need to get cultural controls spot on before we unlock the chemical store. We wanted to see what the experts might suggest on a farm which is already doing so much in terms of cultural and chemical control,” he adds.