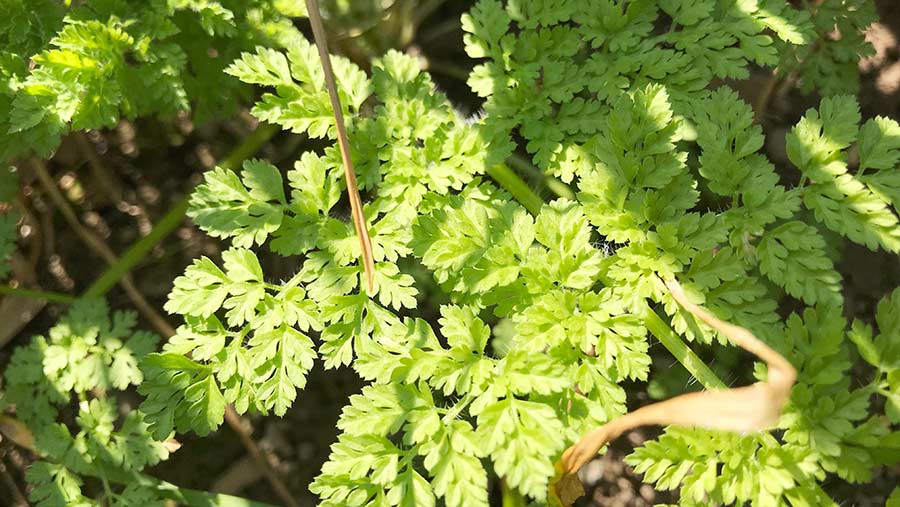 The broad-leaved weed bur chervil is becoming an increasing problem across the country, and must be targeted early this spring if good control is to be achieved.

Different weeds in the group, such as cow parsley, giant hogweed, shepherds needle and wild carrot, are difficult to tell apart early on and this could be contributing to their prevalence.

“Identification is quite important as there are varying levels of control of the different weeds,” he says

Another contributing factor is that growers might not be switched on to the problem early enough to hit it at the right time.

“With the spring programme you have got to control it early before it becomes woody.”

Sarah Cook, research consultant at Adas, says the lack of control of bur chervil in oilseed rape – as neither Astrokerb (aminopyralid + propyzamide) or Belkar (halauxifen + picloram) are effective – is one reason that umbellifers are becoming more prevalent on both light and heavy soils.

She adds that bur chervil seems to be impervious to pre-emergence grassweed herbicides, and although autumn applications of herbicides are preferred, the options available from sulfonylurea herbicides are limited due to the lower rates used.

She agrees that controlling bur chervil early in the spring is key as the weed grows actively through the colder months and can swamp out the crop.

The weed tends to grow back from applications of Broadway Star (florasulam + pyroxsulam) at this time as it is only susceptible up to eight leaves, and is already well developed by the spring.

The best option for spring control is Ally Max (groupulfuron + tribenuron) at full rate of 42g/ha.

A Shropshire grower has targeted bur chervil in his T0 spray this spring, as the umbelliferae weed has become an increasing problem across the farm in the past three years.

Contract farmer Jon Birchall manages the 1,820ha Sundown Castle estate near Upton Magna, and has achieved excellent control of broad-leaved weeds in his wheat crops from his programme of autumn residuals.

“We were complimenting ourselves on how well they have performed this year as I can find just one cleaver,” he said, until he discovered a patch of very large bur chervil weeds.

“It’s a spotless crop with triffids growing in it.”

Mr Birchall believes that the programme of sulfonylurea herbicides could be to blame for his issue by naturally selecting for the weed.

Last year he didn’t target the weed until T1, and while it did achieve control, it meant the bur chervil was already sticking out of the top of the crop.

This season he added a dose of Presite (metsulfuron + thifensulfuron) to his T0 spray in order to achieve good control.

As it is a localised issue in certain areas of fields, in future he plans to use digital agronomy company Rhiza’s contour app to mark out the problem so that the he doesn’t have to spray the whole field at increased cost.