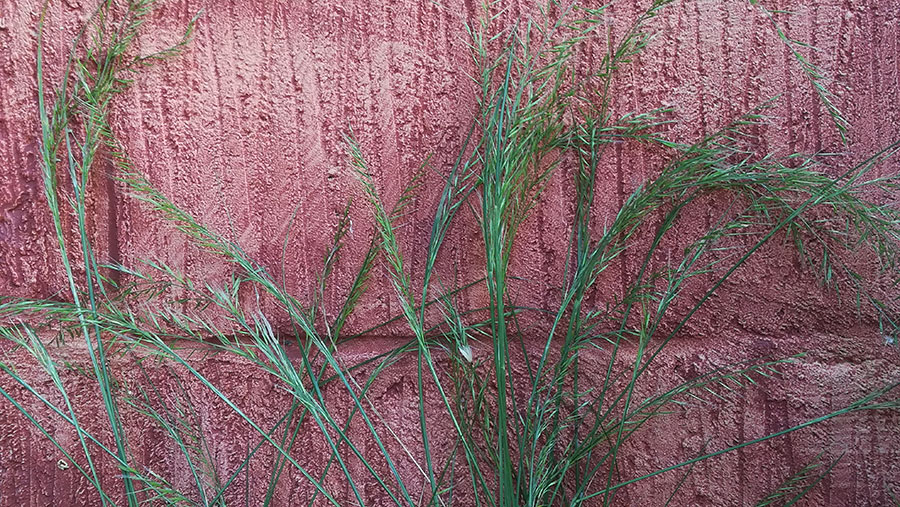 Farmers are being asked to assist in a new study looking at the spread of an invasive grassweed – increasingly reported in arable fields – known as rat’s-tail fescue.

The very competitive annual grass already poses a threat to arable farmers in many European nations, as well as Australia, but reports of rat’s-tail fescue are now on the rise across the UK, where populations are starting to take hold.

Researchers are looking for farmers to take part in a survey to gain a deeper understanding of the weed’s abundance and identify any regions or agronomic practices that may be at higher risk of this species becoming problematic.

Get on top the problem

Project lead Lucie Büchi, from the National Resources Institute, University of Greenwich, said rat’s-tail fescue was a relatively new grassweed in cropping systems in Europe, but it was causing increasing concern.

“In the UK, it is present in natural habitats, but its distribution in arable fields is yet unknown. For this reason, we are launching a UK-wide survey to better understand the current knowledge about and distribution of this species in the UK, and its association with cropping practices.

“It’s really important we get on top of this before it becomes another blackgrass,” she warned.

As part of the survey, farmers will be asked to answer questions about their location, soil type and general agronomy practices to identify if there are any significant correlations between these factors and an abundance of the weed.

Dr Büchi, alongside Rothamsted’s Richard Hull and Laura Cook, are also inviting farmers and agronomists to send in rat’s-tail fescue seeds for analysis, enabling them to study the weed in preparation for its likely spread across the UK.

“We would like farmers who have rat’s-tail fescue on their land to send us a mature seed sample. We can provide them with instructions for obtaining as good a seed sample as possible.

“We plan to run a series of experiments looking at how rat’s-tail fescue may adapt to future climates and to study the differences in the life cycle of wild and natural populations compared with seed collected from farmers’ fields,” said Mr Hull.

To aid identification of the plant, a freely available six-page information leaflet and a shorter three-page identification guide have been produced by the team, available from the survey webpage.

You can complete the anonymous survey online until 31 August.

Predominantly a threat in winter cereals and grasses that are established with minimum cultivation or direct drilling, populations of rat’s-tail fescue can rapidly develop to form a dense carpet that competes with the main crop.

The weed can also be found in orchards and vineyards, and if it does take hold, has the potential to cause significant economic damage.