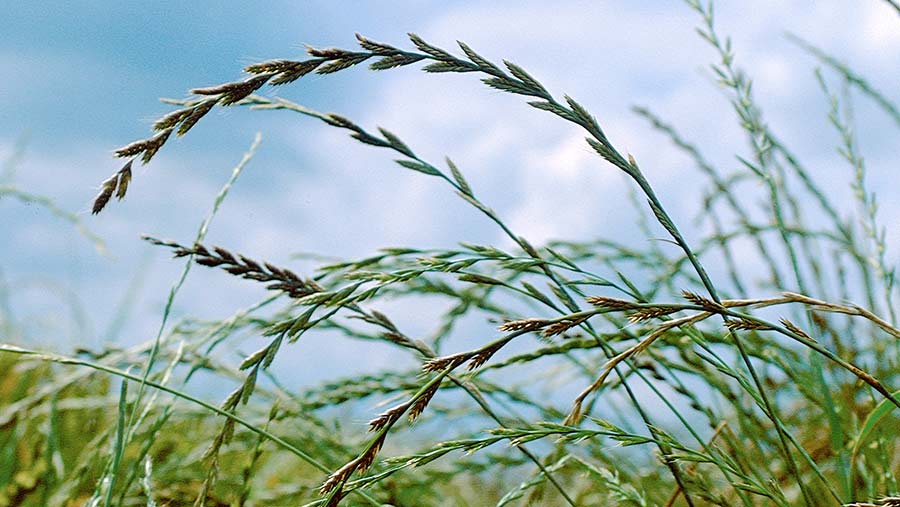 Persistent ryegrass is being controlled on one farm in Kent through the combination of late drilling, growing spring barley and break crops, topped up by a targeted herbicide programme in the worst affected areas.

Both blackgrass and ryegrass were a problem at Stanford Bridge Farm in Pluckley, Kent, when Terry Metson took on the role of arable manager in 2017, but ryegrass has proved to be the bigger challenge of the two.

On top of a strategy of cultural controls for both grassweeds, Mr Metson’s herbicide programme for ryegrass is 50% more expensive than it is for the blackgrass, as traditional blackgrass chemistry has proved less effective on the grassweed.

As ryegrass is more localised, Mr Metson says research on the grassweed has slipped, and believes it has the potential to become a bigger issue in the future, adding that he would willingly swap his ryegrass for anybody else’s resistant blackgrass.

While blackgrass prefers heavier poorly drained land, ryegrass will grow on any of the farm’s variable soil types, including free-draining stonier soils, and unlike blackgrass it will germinate all year round.

“Ryegrass is the gift that just keeps on giving. It goes for any soil type, it isn’t choosy,” he says. “It’s very aggressive and tillers like crazy. In my opinion the potential seed return for it is at the same level as blackgrass.”

Mr Metson suspects the root cause of the farm’s issues with ryegrass lies in the fact that it is mixed. Alongside 700ha of arable cropping, the farm also has 250ha of grass.

The majority of the arable land has been put down to grass at some point in the past, and spraying these off with a standard herbicide programme to be put back into cropping may have selected for ryegrass resistance.

Due to this, grass leys are no longer being used as a rotational element on the farm, and any grassed areas of arable land will be in leys for at least five years.

With the source potentially identified, Mr Metson has focused his grassweed strategy on exhausting the seed bank in the top few inches of the soil.

The top 7cm to 10cm of the soil is moved straight after the combine using a Simba SL, which has both discs and tines and also a press on the back to make a stale seed-bed.

Then the field is left for at least four weeks, ideally longer, before being completely sprayed off with glyphosate and drilled with as little disturbance as possible.

For this reason Mr Metson’s break crops of winter beans and oilseed rape are direct drilled, and a policy of managed wheelings means subsoiling has been able to be restricted to just problem areas.

This season, land with bad ryegrass was drilled right at the end of October, but last season he was a bit braver and drilled at the beginning of November.

Although control levels of non-resistant ryegrass are less than the 100% claimed by the manufacturers, a two-spray pre-emergence and peri-emergence programme (see box) is giving a level of control that Mr Metson is happy with.

“Stacking the products gives us the best control we can have, but it’s not 100% control,” he says.

However, it has its drawbacks, such as being 50% more expensive than his equivalent programme for blackgrass, meaning it is only used on specific targeted fields.

All the fields on the farm have been graded according to a traffic light system for both grassweeds, and only those that are double red (both ryegrass and ryegrass) are sprayed.

This chemical programme also forces Mr Metson to grow a spring crop on the land, as growing a second wheat risks a build-up of diflufenican in soil.

Instead, the rotation has been diversified to a winter wheat, followed by a spring cereal, and then a break crop of either beans or rapeseed.

Spring barley is grown in the spring cereal slot due to its competitiveness , although Mr Metson says it is only marginal against ryegrass, with less competitive spring oats having no hope at all.

A break crop of either winter beans or rapeseed allows the use of alternative chemistry to tackle the grassweed, and with Mr Metson now growing beans for Frontier on contract for use as fish food, is also profitable.

When Mr Metson first joined the farm in 2017, the ryegrass situation was so bad he sprayed out a big area of wheat as the likely seed return for the grassweed was too high to justify harvesting the crop.

Since implementing the grassweed strategy, the reduction in ryegrass in some particularly affected fields has been between 98% and 99%.

In one such field, a wheat crop was harvested last season with just one or two ryegrass plants per square metre.

However, once the crop had been harvested the stubbles turned green almost immediately, showing that while the problem is under control, it will be an ongoing battle, one that is likely to get harder as flurtamone has lost its approval.

“I’m not expecting to be able to get hold of too much for autumn this year, it’s a big worry. There is no equivalent at the moment that I know of.

“We really need someone to pick up the can and do some proper research and trials into it,” he says.