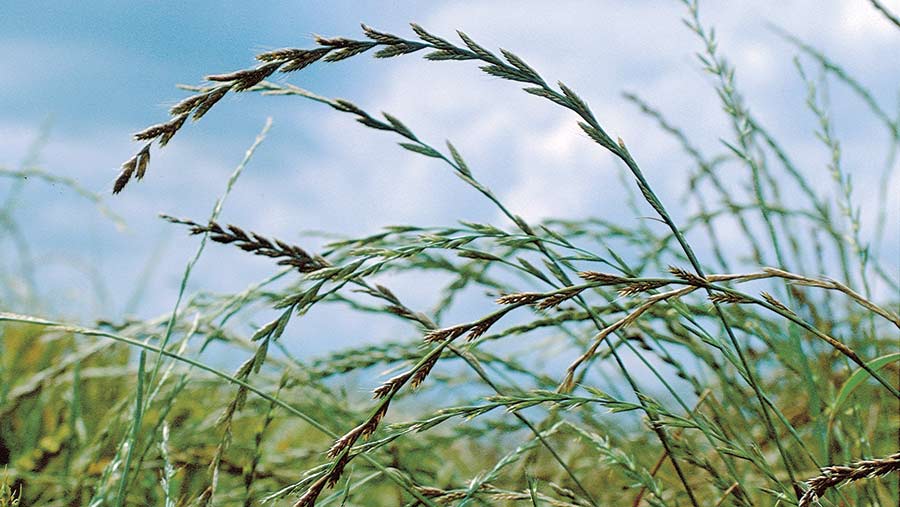 Hitting weeds hard before drilling and then again with a well-timed pre-emergence herbicide programme is helping to reduce numbers of costly resistant grassweeds on farms in Lincolnshire and West Yorkshire.

The rise of herbicide-resistant blackgrass and ryegrass combined with dwindling post-emergence options means the emphasis of weed control is shifting much earlier in the growing cycle.

Farmers are being urged to make the most of cultural approaches this coming autumn, including delayed drilling and stale seed-beds.

Then comes the well-timed pre-emergence chemistry leaving the post-emergence herbicides to mop up any survivors.

This is the approach being taken by two farmers tackling very different grassweed problems, which in a bad year are severely hitting crop yields. 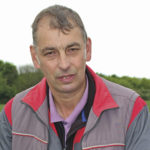 On the heavy soils in one corner of West Yorkshire, resistant ryegrass has flourished over the last decade in an area once dominated by coalfields.

However, West Yorkshire farmer Richard Gill is hoping that he is finally getting on top of the weed, which in a bad year has been reducing his wheat yields by up to a quarter.

“That’s because ryegrass is much more competitive per plant than blackgrass. It sucks resources from the soil and, therefore, wheat suffers.”

Mr Gill believes his heavy soils with poorly drained patches, a legacy of the old coal mines in the area, is well suited for the grassweed to flourish.

Another factor is herbicide resistance, hampering the efficacy of post-emergence herbicides.

Testing of his ryegrass revealed that his population is triple R resistance to ALS inhibitor herbicides [check] herbicides, prompting to him adopt cultural approaches as well as a robust and well timed pre-emergence herbicide programme.

One key change has been the introduction of a spring crop into his rotation. Until recently, he ran a four-year rotation of first wheat, second wheat, winter barley and oilseed rape.

He has introduced spring barley after the second wheat to help break the cycle. This is because farming in the North on heavy, poorly drained soil means he is unable to reliably achieve more than one stale seed-bed between harvest and drilling. 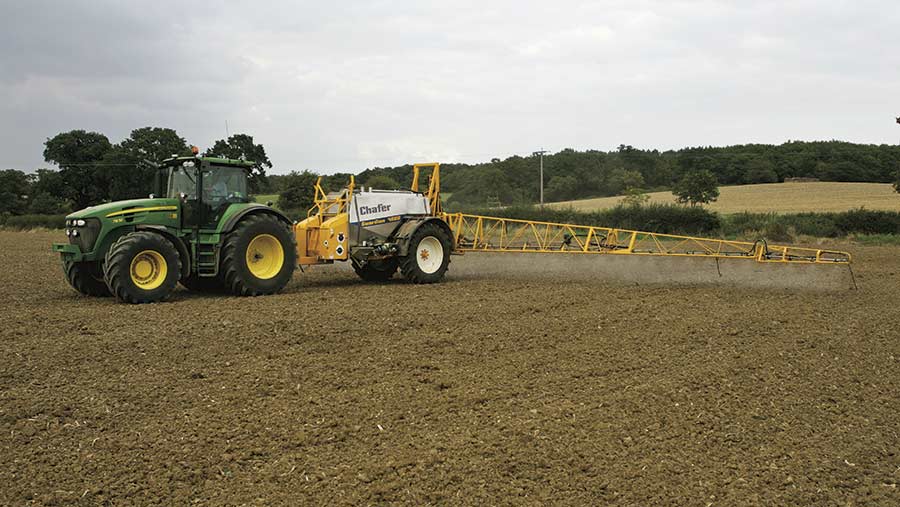 The value of stale seed-beds is clearly evident this spring, with fields looking much cleaner. An open autumn saw drilling much later – 28 October to 3 November.

“Late drilling really worked last year, but I was nervous going that late. Normally you have to go September/early October or you risk not getting on to the ground.”

He hope to hopes to build on this progress next season with spring cropping as well as adopting lessons from trials carried out by Bayer CropScience.

The other challenge with ryegrass is the more protracted germination. Mr Coombs says that unlike blackgrass, ryegrass tends to germinate 50:50 in the autumn and spring.

“Therefore, you need to save the post emergence to hit the spring emerging ryegrass weeds, which means it is more important to get the pre-emergence right.”

Pre-harvest, he opts for a targeted glyphosate for infested areas to help with crop ripening and to clean up ryegrass.

Hitting blackgrass hard before drilling and then again with a robust pre-emergence stack is at the heart of a father and son’s strategy for a rampant blackgrass problem.

Andrew and Tom Ownsworth are cropping on heavy land in a known blackgrass hotspot area near Fulbeck, north of Grantham in Lincolnshire.

Rotational ploughing is being deployed to bury the blackgrass seed.

“But to work, it must be high-quality ploughing done slowly to ensure full burial,” says Tom. “You need to spend enough time to do a proper job.”

Drilling is then left as late as possible and the open autumn meant they pushed it to 28 October, which Andrew tells Farmers Weekly is “late for up here”.

It stayed dry and had a good seed-bed. They also priorities fields, so those with the worst infestations are drilled last.

Seed rate are also higher, at 300kg/ha, to get more competitive winter wheats. Winter wheat is all milling, Edgar and Illustrious. 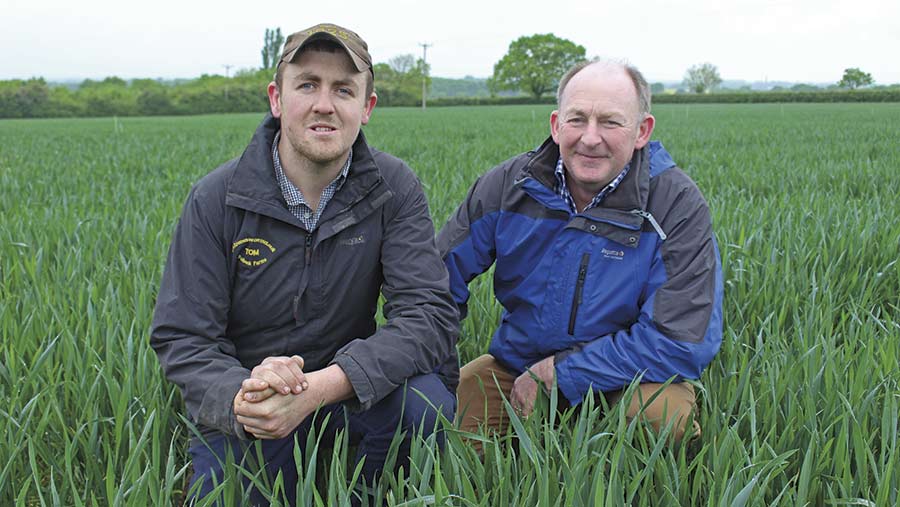 While success is being seen with blackgrass, the Ownsworths are hosting a Bayer trial in their worst blackgrass fields looking at different pre-emergence and post-emergence herbicide strategies.

“We are hoping to gain some pointers that will allow us to continue growing milling wheat, as this is our biggest earner. We are looking for cost-effective solutions.

Another driver to reduce the ergot risk, which blackgrass can harbour, especially with spring wheat which is more prone to infections.

The Ownsworths have also bought a colour sorter to remove affected grains, to avoid the costly rejection of loads at the intake.

One key message from the trial is the importance of pre-emergence timing, as the trial looked at different times – true pre-emergence, one month and then two months later.

If the pre-emergence goes wrong, there is not much left to get weed control programmes back on track with the current post-emergence options in wheat.

A pre-emergence with some contact activity plus a post-emergence offering more blackgrass firepower are two herbicides in the Bayer pipeline that will help farmers manage blackgrass in future seasons.

Timing is critical in getting the most from pre-emergence herbicides, but sometimes delays are unavoidable, says Bayer’s Ben Coombs.

One pre-emergence being trialled is effectively Liberator (diflufenican + flufenacet) with some metribuzin, which brings some contact activity.

“In trials, it offers better control of blackgrass and some broad-leaved weeds than Liberator.”

It still works as a true pre-emergence, but if timings slip, the contact action will take out weeds that have emerged, adds Bayer commercial technical manager Adam Tidswell.

Mr Coombs explains that it is a race to get the residual down in the rooting zone before weeds germinate.

If the spray is delayed and weed seeds have already germinated, it has further to travel. That’s why you see the drop off in pre-emergence efficacy when they are delayed. 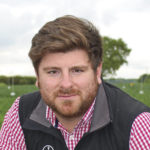 Both Andrew and Tom Ownsworth see the value of some extra flexibility from this new mix.

“Autumn can be so busy with clearing bales from fields and beans to harvest – you are often flat out in September. And if the weather is not on your side, it can slip,” says Andrew.

The second product in the Bayer pipeline is the post-emergence Monolith, offering greater grassweed activity.

It contains mesosulfuron and propoxycarbazone, and is seen as the replacement for spring applications of Pacifica.

Not only does the mix offer an uplift in blackgrass control, it also gives a wider spectrum giving better control of bromes and ryegrass. It is due to be launched in late 2017.