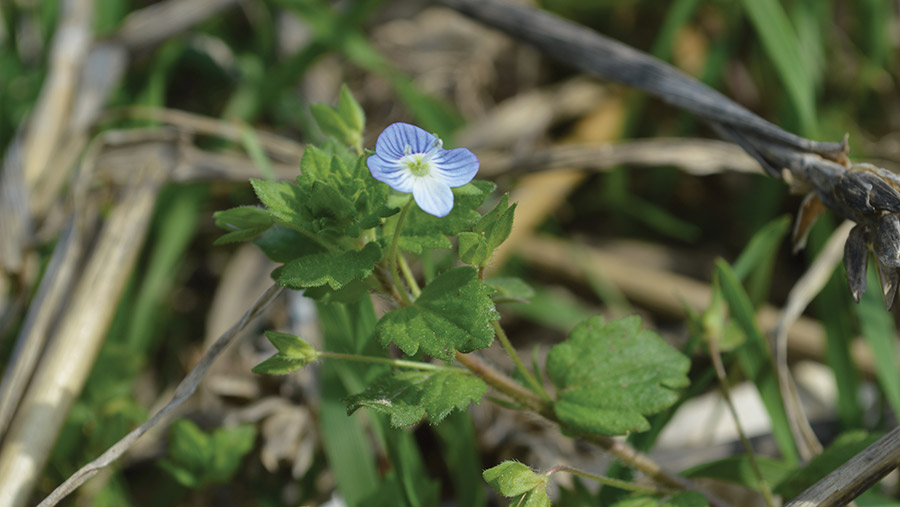 Herbicide-resistant speedwell is becoming an increasing problem on the chalky downlands of southern England and has prompted the revival of an old contact-acting weedkiller.

The widespread use of sulfonylurea (SU) herbicides for broad-leaved weed control in cereals has led to growing resistance to them from speedwell, and especially ivy-leaved speedwell.

This has led to the relaunch of the contact herbicide carfentrazone-ethyl (Aurora) to give control of speedwell, cleavers and cranesbill. The active is used in a different formulation for potato desiccation product Spotlight Plus.

Richard Cromie, agronomist with consultants Crop Management Partners, says speedwell is becoming more common in his area of southern England and sees a need for a herbicide with a different mode of action to SUs, such as carfentrazone.

Aurora is available as a water dispersible granule containing carfentrazone-ethyl for the control of broad-leaved weeds in winter and spring wheat, barley and oats and triticale.

“This could be a replacement for SUs in some situations, and will also help SUs to last longer,” he tells Farmers Weekly.

A pre-emergence spray would often have included diflufenican (DFF), which has good activity against speedwells, and so the absence of DFF saw the weed become a problem for growers across West Sussex, Hampshire and Wiltshire.

If there is good weather in the autumn and pre-emergence herbicides are applied, then carfentrazone may not be needed, but could still be used in the spring.

Indeed, Mr Cromie believes its main role could well be in the spring as a broad-leaved weed tidy-up product in the place or with SU herbicides, such as Ally or Harmony.

Note: All actives are sulfonylureas

Useful in the spring

He adds that because of its different mode of action to SUs, carfentrazone will be particularly useful in the spring, especially if DFF has not been used in the autumn.

Because of its contact nature, timing will be key in the spring with control of ivy-leaved speedwell vital as the weed shows more resistance to SUs than common speedwell.

The herbicide can restrict crop growth soon after application, so it needs to be applied when the crop is well waxed, and its weed spectrum could be widened to boost chickweed control by applying it with the hormone herbicide mecoprop, also known as CMPP.

“Speedwell is a problem on the chalk soils within break crops of oilseed rape, beans and linseed,” he says, as he looks to control the weed more easily in his cereal crops.

“If you don’t suppress these four in the autumn, they can get very big in the spring, especially ivy-leaved speedwell, which tends to grow and grow if unchecked,” he says.

Carfentrazone has a different mode of action to SUs as it disrupts plant membranes by inhibiting the action of protoporhyrinogen oxidase, causing cell death, whereas SUs inhibit the plant enzyme, acetolactate synthase, resulting in impaired branch chain amino acid synthesis, and plant death.

Mr Espir describes carfentrazone as a ”tool for agronomists” as its use can be very flexible, and they can “wait and see” before using the product.

It can be used in a wet autumn after a flush of weeds, or if not needed in a dry autumn can be held back for possible use in the spring.

In the autumn, it can be applied separately or in a tank mix with a pyrethroid insecticide for controlling the aphids that spread barley yellow dwarf virus.

In addition, with early weed control in autumn cereals based around a handful of actives such as flufenacet, DFF and pendimethalin, it is useful to have a herbicide with a different mode of action.

If needed in the spring, carfentrazone can be used on its own or in combination with an SU or a hormone herbicide such as mecoprop. If an SU is used mainly for chickweed and mayweed then the carfentrazone can add good control of speedwells.