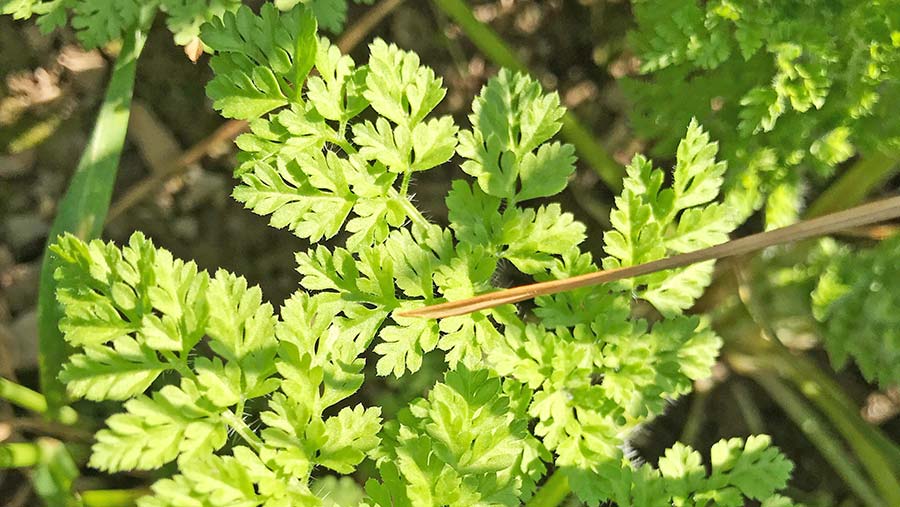 Members of the umbelliferae broad-leaved weed family must be identified and dealt with specifically in the spring, as autumn herbicide strategies do not target them.

Cow parsley is the most widely known umbelliferae weed, commonly seen along hedgerows with its “umbrellas” of white flowers, but other members of the family are becoming an increasing problem on arable land.

They are surprisingly competitive and can smother out cereal crops, weed experts warn.

Bur chervil, in particular, has been reported to be an increasing problem across Shropshire and Herefordshire, but is often incorrectly identified as wild carrot.

The increase in numbers is primarily due to the lack of control achieved in both oilseed rape and cereal crops by autumn herbicide strategies, as growers focus on tackling more common problem weeds such as blackgrass, brome and ryegrass, and common broad-leaved weeds such as speedwell.

Sarah Cook, research consultant at Adas, says neither Astrokerb (aminopyralid + propyzamide) or Belkar (halauxifen + picloram) – which are commonly applied to oilseed rape in the autumn – are effective against umbelliferae.

Equally, the loss of certain chemistry had allowed this class of weeds to get a foothold in cereal crops, warns Niab Tag weed biology specialist John Cussans.

“Since we’ve lost herbicides like triflurain, isoproturon and chlorotoluron, which gave control of these species as collateral damage, they’ve been increasing unchecked and often unobserved until at quite high populations.

“Growers can be spending a lot of money targeting grassweeds and apply a lot of herbicide, but there is still a gap in the weed-control spectrum that these species come through.”

It has thin and wiry stems, leaves that resemble feathers, and small white flowers.

It smells like parsley when crushed and shouldn’t be confused with stone parsley, which smells of petrol.

Fool’s parsley
Grows in hedge banks, arable fields and other cultivated ground. The cotyledons are between three and eight times as long as they are broad and can be confused with shepherd’s needle.

Prefers chalky clay soils, but can grow on sands and gravel.

Cotyledons are long and thin, plant is slightly hairy when young, with the first true leaves deeply divided into three sections.

With the class of weeds seemingly impervious to pre-emergence grassweed herbicides, control early in the spring is key, as they are capable of putting on a lot of growth over the winter.

Bur chervil will grow back from applications of Broadway Star (florasulam + pyroxsulam) at this time, as it is only susceptible up to eight leaves, and is already well developed by the spring.

While sulfonylurea herbicides will achieve control in the spring, they must be used at the right time, as their effectiveness is limited due to the lower rates used.

However, spring weed control is not focused enough on controlling these weeds, and this is another reason for umbelliferae having more effect on crop yields, says Mr Cussans.

Herbicide efficacy is being compromised in favour of fungicide timings and tank mixes, he says.

“We have options that provide really good control of umbelliferae but, crucially, they all require the weed to be relatively small to be effective, and often they are not being applied early enough.

“Even the most effective herbicide can be made ineffective if not used at the right timing.”

To achieve good control, sulfonylureas must be used at the T0 fungicide timing rather than T1 to hit the plants when they are still small.

To add to the difficulty in controlling the weeds, members of the umbelliferae family have varying tolerance to herbicides.

While fool’s parsley and wild carrot are susceptible up to four true leaves to applications of 0.5 litres/ha of Pixxaro (fluroxypyr + Halauxifen-methyl), chervil and shepherd’s needle are tolerant of the herbicide.

The best option for spring control of bur chervil is Ally Max (groupulfuron + tribenuron) at full rate of 42g/ha.

To ensure the right herbicide can be applied at the right timing, correct identification early in the season is crucial.

Here we run through the key characteristics of different members of the umbelliferae family at cotyledon stage. 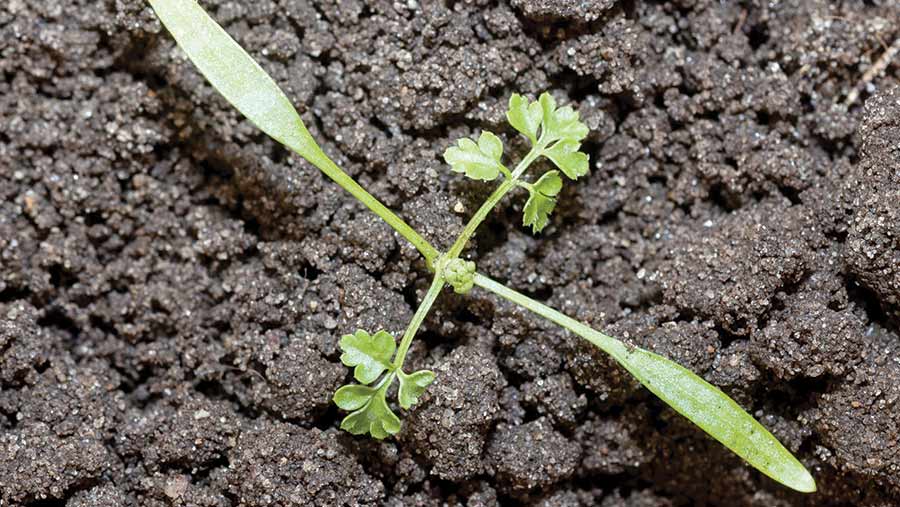 Soil type: Prefers well-drained, sandy or gravely soils with a pH of 5-7.
Area: Had been confined to the East, but increasingly being seen in the West, in counties such as Herefordshire and Shropshire.
At cotyledon stage: Cotyledons are long and narrow, and taper gradually at the base with no distinct petiole (the stalk which attaches the leaf blade to the stem). First true leaves are lobed and edged with bristles, with hairy, round stalks.
Key features: Seeds have hooked spines and a short beak. 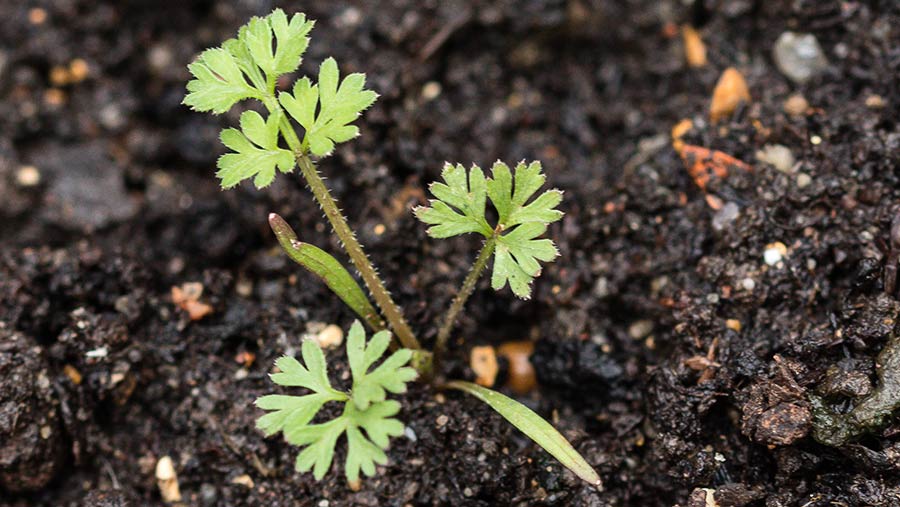 Soil type: Prefers infertile but well-drained, chalky soils, usually found around field margins.
Area: Especially common across chalky land in the South East, but can also be found in East Anglia and the midlands.
At cotyledon stage: The cotyledons are between three and eight times as long as they are broad. First true leaves are deeply divided and hairy. Looks very similar to shepherd’s needle, but first true leaves are hairier and coarser, while shepherd’s needle has few hairs.
Key features: Smells of carrot when bruised. The flowering stem appears to zig-zag. 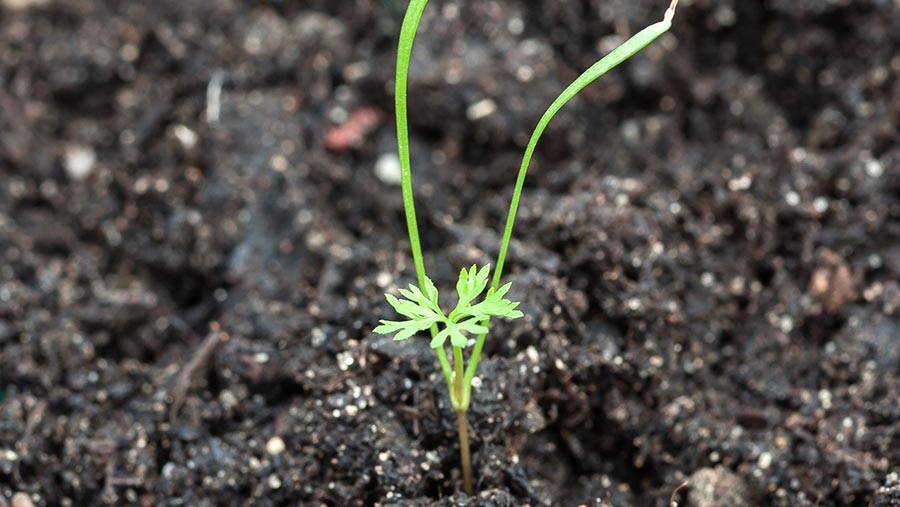 Soil type: Prefers warm, chalky clay soils that are dry in the summer and nutrient-rich.
Area: Once regarded as a serious problem, it is primarily seen in large numbers in East Anglia.
At cotyledon stage: The cotyledons are pointed and very long, at least eight times as long as they are broad. Looks similar to wild carrot.
Key features: Long, thin seed pods are held in upright clusters-like “needles”. 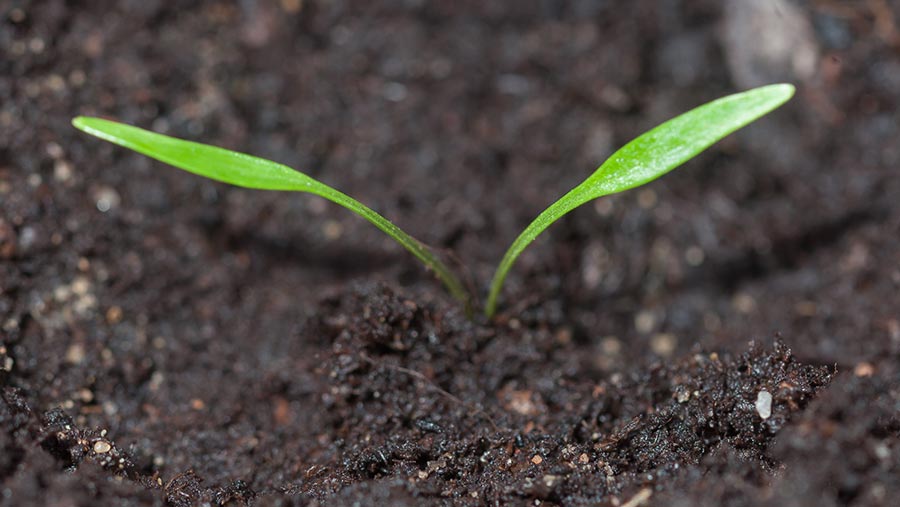 Soil type: Most frequently found on alkaline soils – does not like wet or very dry conditions.
Area: Grows throughout Britain in hedgerows, verges, meadows and river banks, spreading into crop headlands.
At cotyledon stage: Can be confused with other umbellifers when young.
Key feature: Is the first umbelliferae to flower.