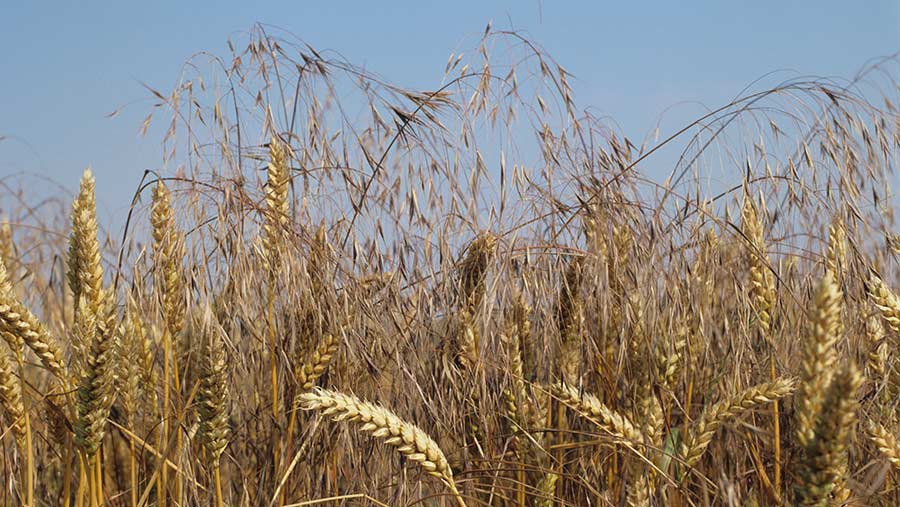 The recent discovery of six populations of brome that are resistant to a key group of herbicides means that growers should adopt a zero-tolerance approach to the weed.

Work carried out by Adas as part of an AHDB project has identified some UK populations of the weed that are resistant to acetolactate synthase (ALS) inhibitor herbicides such as Broadway Star (florasulam + pyroxsulam).

A leading researcher therefore advises that, as done with blackgrass, growers should aim to manage field populations and take every opportunity to reduce weed numbers before any herbicide applications begin.

See also: Fusarium: How to assess and manage the risk in cereals

That means making the most of cultural control methods and rotational efforts in an integrated control strategy, ahead of optimising herbicide use, to minimise the risk of any further spread of resistance.

As Sarah Cook, a weed specialist at Adas, explains, bromes tend to grow in the same place as blackgrass, so are likely to have received plenty of herbicide applications over the years – even if they weren’t the intended target.

“Their incidental death was caused by blackgrass sprays for a while,” she says. “As blackgrass developed resistance to herbicides and they stopped working, there was a move away from using Atlantis (iodosulfuron + mesosulfuron), an ALS-inhibiting herbicide. The result was more brome.”

There has also been an upsurge in the weed with the move to min-till and no-till systems, which favour the brome species, she points out.

“It’s a very competitive grassweed which, when it gets really bad, can pull a crop down. As it has become increasingly difficult to control, there have been more questions asked about its status.”

Repeated applications of herbicides with the same mode of action, often at low rates, are known to encourage resistance. While this may have occurred mistakenly as far as brome is concerned, there is no way back.

For that reason, the aim in wheat is to have no brome present before spraying starts, with mixing and sequencing of herbicides being important, as well as conditions at application and spray quality.

“Growers must be alert to the risks of herbicide resistance evolving rapidly,” Dr Cook says. “Remember too that brome can’t be controlled well in barley, so don’t grow it if you’ve got the weed.”

“Previous work on brome identification had thrown up a few warning signals and we already knew that sterile brome was glyphosate-tolerant.”

What the results mean to growers is that popular ALS herbicides such as Broadway Star (florasulam + pyroxsulam) and Pacifica Plus (amidosulfuron + iodosulfuron + mesosulfuron) may be affected and, if they are, control will be compromised.

The samples tested all came from different locations, so it appears that resistance has developed independently in field populations.

In meadow brome, the type of resistance was target-site, while enhanced metabolism resistance was confirmed in the three samples of sterile brome and one each of rye and great brome.

However, all of the brome populations tested were sensitive to propaquizafop, even though resistance to this active ingredient in sterile brome was identified in Germany in 2012.

The brome story has similarities to the blackgrass one, admits Dr Cook, but there are some biological variations between the two species which growers need to be aware of.

The first of these is that brome is self-pollinating, while blackgrass is cross-pollinating.

“If a species is self-pollinating, resistance to herbicides doesn’t spread that rapidly,” she notes. “In addition, brome seed has a shorter persistence, of 1-2 years. So these are weaknesses as far as brome is concerned.”

The next is that meadow brome can be both autumn- and spring-germinating – which is additional to previous knowledge.

“Bromes have a longer persistence than we first thought,” she adds. “There’s no doubt that we are a bit behind on the biology of the weed and need to know more. Once we have that information, we can be more accurate with our recommendations.”

This autumn will be an interesting time for brome, she believes. “After the very wet 2019 autumn and winter, lack of autumn drilling and increase in spring cropping, there could be quite a shift in populations. Hopefully, some good will have come from such a testing time.”

Bromes tend to germinate earlier than blackgrass, so stale seed-beds and delayed drilling can be used to good effect.

In terms of herbicides, there are still the pre-emergence products, which should be used to tackle bromes while they are still small and vulnerable, she adds.

The post-emergence options – while potentially affected by resistance – will still work in most situations and label advice should be followed.

“Remember that the Group A graminicides (ACCase) are still effective, so there’s an opportunity to get good control in break crops.”

Sterile brome has a tendency to lurk around the edges of fields and can often be found in the margins. The key with this species is not to bring it into the field from the crop edges, so be careful with cultivations and field operations.

“It can also be spread in straw, so think about the implications for bedding and any farmyard manure applications too.”

Getting brome seeds to germinate ahead of the new crop depends on the species, Dr Cook stresses.

“With rye and meadow brome, you need to leave the seed on the surface for a month to ripen. It’s not mature when its shed from the plant.

“But with sterile brome, it has to be buried to germinate, as exposure to light induces dormancy. A shallow cultivation is advised, unless chopped straw provides good cover.”

Either way, the flush can then be removed with glyphosate before drilling.

More growers are required for an Innovative Farmers field lab – Controlling Brome Weeds in Arable Farming – and more details can be found at www.innovativefarmers.org.

The aim of the group is to learn more about the biology of brome and fill some of the knowledge gaps that exist – using a network of farmers and growers running on-farm trials.

Run by Adas in conjunction with the Soil Association, the field lab will look at when bromes emerge, what species are present and where in the field they proliferate.

It will also investigate the use of cultural control methods in helping to manage brome more effectively.