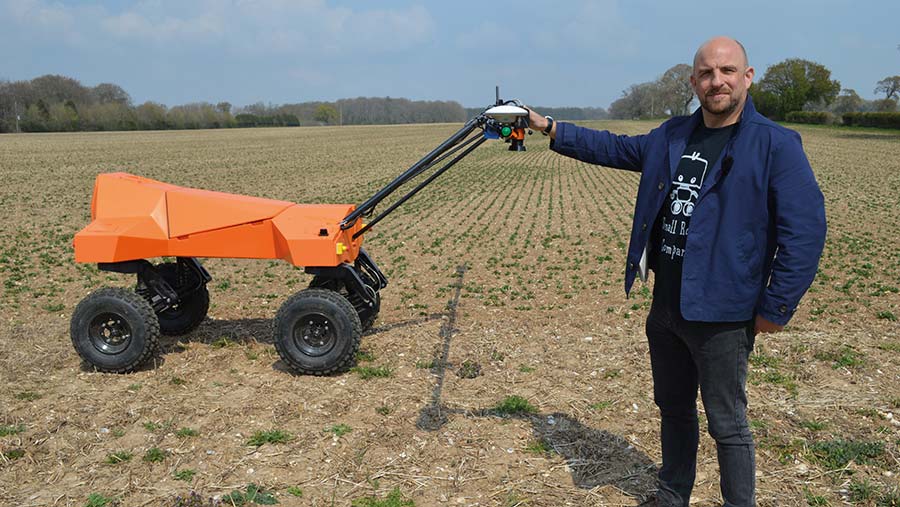 Four farms will use field robots this autumn to identify weeds, which eventually will lead to electronically zapping them, in a move likely to appeal to growers looking at more sustainable farming practices.

The prospect of controlling weed without using herbicides, tillage, water or diesel may be about to take a step forward as the first commercial robots take to winter wheat fields later this year.

It could also help growers struggling with herbicide-resistant weeds, such as blackgrass, spiralling pesticides costs, and offer a solution if the widely used herbicide glyphosate is ever banned.

Watch the video to find out how the robot works and read the full report below.

He adds that there is a seven-year ticking clock to when area-based subsidies under the Basic Payment Scheme are ended in 2028, and as farmers look to adopt to new Environmental Land Management (ELM) schemes, which will be rolled out from 2024.

“As BPS drops away, we are trying to find a nature-friendly farming model to take advantage of ELM schemes,” he says.

The first commercial move from the company will see its weed-monitoring robot Tom trundling across winter wheat fields this autumn on four farms.

This will include the Sainsbury family-owned Lockerley Estate and Waitrose’s Leckford Estate – both in the River Test area of Hampshire. 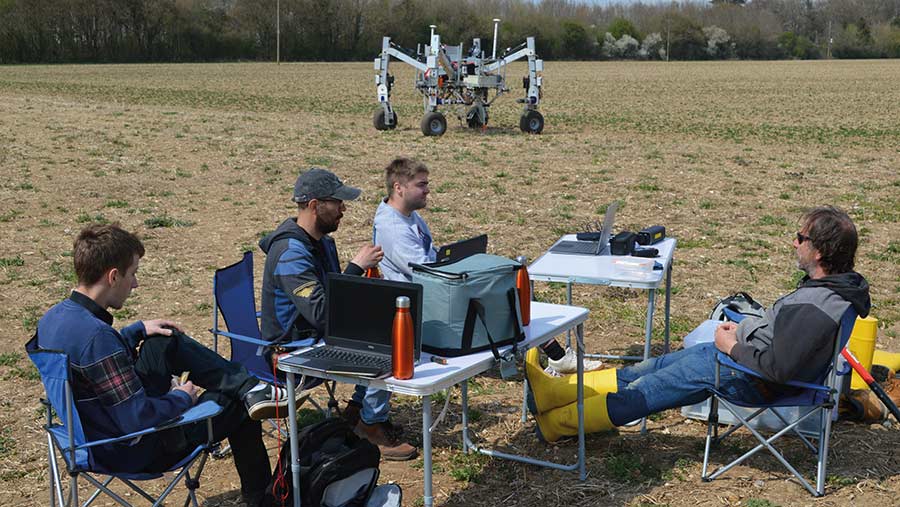 Initially, Tom will monitor and map weeds with its 6m wide boom across wheat fields at a cost of £40/ha, allowing the farms to patch spray or use variable-rate herbicide treatments.

When the weed-zapping robot Dick enters the commercial world, planned for 2022, it will identify weeds from Tom’s monitoring and kill them electronically, thus eliminating the need for herbicides.

The eventual cost of  using Tom and Dick together is likely to be at the higher end of a grower’s herbicide wheat costs at about £150/ha.

However, the cost is likely to come down as the service picks up and economies of scale are made.

This service would entail two passes with Tom – one at crop emergence and the second at the onset of winter – and one pass with the weed-zapping Dick, and then a similar three passes in the spring before wheat crops get too tall in April.

This relatively high cost needs to be set against the big cost savings in terms of machinery use, diesel consumption and staff cost, and Mr Scott-Robinson says the system will deal with resistant weed, while its no-tillage approach will help improve soil structure.

One early enthusiast is Craig Livingstone, farm manager at Lockerley in the village of East Tytherley, on the Hampshire-Wiltshire border, who is looking to reduce crop inputs and prepare for a new more environmentally focused farming policy.

In the past five years, he has cut pesticide use by 41% on the 1,000ha estate and bagged fertiliser use by 32%, all brought about by changing crop rotations, introducing more grassland and livestock, changing cultivation techniques and growing cover crops.

“To push those savings to 50, 60 or 70% without compromising yields, we need new technology. Robots would seem the next step, driven by changes in farm policy and to stop spending money on insurance spraying,” he says.

Mr Livingstone adds that data from the robotic system will give him confidence “not to do something”, such as reinforcing decisions to cut back on fungicides in the current dry low-disease spring.

He is already growing wheat varieties with good disease resistance, such as Extase and Siskin, across 230ha, but he is wanting to balance disease risk more precisely with fungicide usage.

Five years into regenerative farming practices on the estate such as direct drilling and the use of grass ley to improve soil health and biodiversity, he sees non-chemical weeding as offering another solution to reducing input levels.

The robot’s ability to record bird song could also be useful in a new world of “public money for public goods”.

His estate, running from heavier soils near the River Dun up on to lighter chalk uplands, does have some blackgrass problems on the stronger ground.

He says blackgrass control is costing the farming industry a fortune and weed resistance to herbicides is the number one problem facing the industry at the moment.

Robots could offer an answer while reducing artificial inputs.

So this autumn, the lightweight monitoring robot Tom will scan some of his wheat fields in detail. 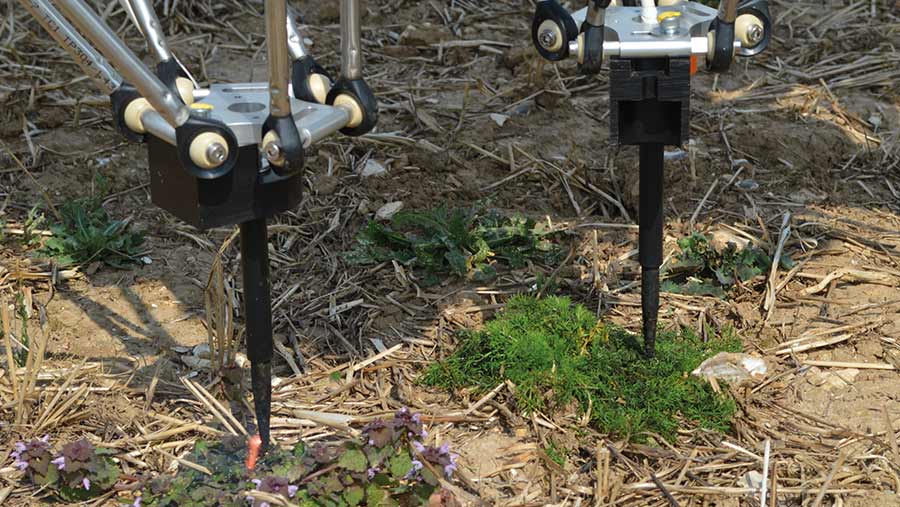 Tom, built by Tharsus, based at Blythe in Northumberland and which makes the Ocado warehouse robots, is in its version-three incarnation, and can cover 20ha in an eight-hour day.

It can even work at night, travelling at 1.5m/sec, with less than one-third of the ground pressure of an adult human foot.

It can identify blackgrass in a field of wheat within two weeks of emergence and feeds all its data through its artificial intelligence brain Wilma to the larger robot Dick to zap weeds using a “lightning strike” of up to 12,000 volts.

Dick, powered by Tesla car batteries and capable of working for four hours before recharging, has the ability to take out only important weeds, using its zapping probe arms developed by the specialist company Rootwave.

Mr Scott-Robinson explains that Dick only zaps 40% of the weeds present – those that have big effects on yield, such as blackgrass, cleavers and bromes.

A further 20% of weeds that have a neutral effect on yield can be thinned, while the remaining 40% of weeds, which have little effect on yield, such as flowering pansy and clover, can be left.

The Dick robot is seen as a platform that currently kills weeds electronically, but can be adapted to use pesticides in the future if needed.

Harry, the final robot under the system, is still being developed and will be aimed at precision-drilling crops.