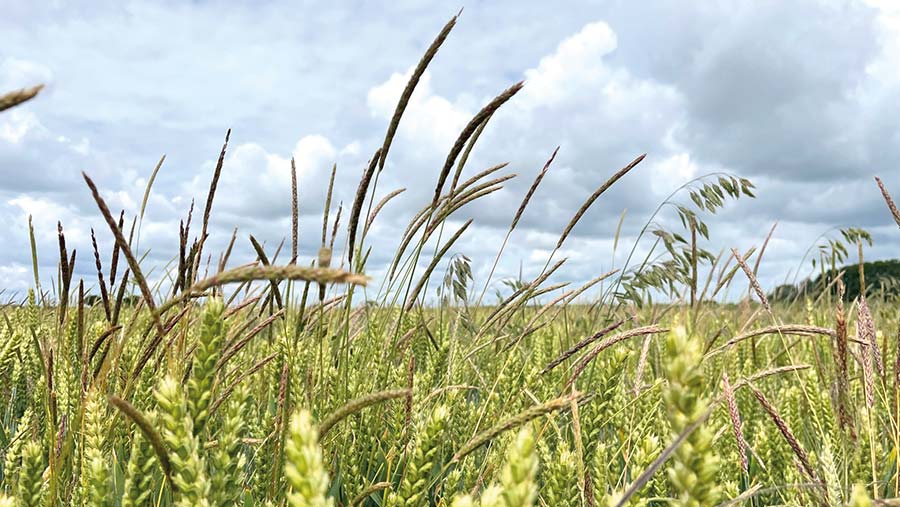 Establishing cover crops on heavy boulder clay and managing brome are two challenges being tackled in a long-term blackgrass trial.

A brome problem is forcing changes to stubble management strategies this summer, as the weed makes its unwanted appearance in Agrii’s blackgrass trials.

And it’s not just this heavy land farm near Stow Longa that is reporting a worsening problem with brome. Agronomists and growers across the UK are seeing more of the weed this summer in some winter cereals.

See also: 10 learnings from more than 21 years of blackgrass trials

Agrii head of agronomy Colin Lloyd oversees the company’s blackgrass trials, which are now in their 22nd year.

After five years of direct drilling/min-tilling, he has seen rising numbers of soft and meadow bromes. “The blackgrass-threatened farm now faces a new issue,” he says.

Across all 18 cultivation/crop combinations, there was a £1,448 difference in gross margins, all in the same field. However, increasing levels of this grassweed are contributing to the poorer performance of some plots.

The worst performer was the direct-drilled fourth Zyatt wheat, with 81 ears/sq m of brome plus 148 ears/sq m of blackgrass, and a gross margin of -£188/ha.

Just above that was the deep-drilled fourth Zyatt wheat plot, which had 202 ears/sq m ears of brome and 158 ears/sq m of blackgrass with a margin of -£177/ha.

So what’s causing the brome problem? Mr Lloyd points out that unlike blackgrass, soft and meadow brome seed needs to lie on the soil surface for a month before germination.

That is because it needs light and warmth to allow seeds to ripen and mature on the soil surface.

However, being a blackgrass trial, stubble is being cultivated soon after harvest to encourage a chit, which inadvertently could be causing the brome problem.

“To get a good blackgrass chit, the aim is to move ground straight away,” says Mr Lloyd. “This is why we are seeing brome increase.”

So this summer he is planning to wait a month before cultivating, to reduce seed dormancy so they can be sprayed off rather than lurk in the seedbank for future seasons.

He may look at using a straw rake over part of the area and leave an area untreated, as clumps of straw could cover the brome seed and have the same effect as burying seed with cultivations.

Another option where brome is a problem, and where delaying cultivations is not an option, is to go for a spring crop instead.

Ploughing may also be a solution in drastic situations. He points to an Agrii trial in Scotland three years ago where a bad brome area was ploughed. Part of this area was ploughed again the following year and numbers remained low.

“The fear is that ploughing again would bring up brome seed, but we didn’t see that,” says Mr Lloyd.

Work is ongoing at Stow Longa.

While establishing cover crops on boulder clay is proving to be a challenge, benefits are being seen after eight years, with improvements in soil structure and biology.

With a typical Quadtrac tractor now costing about £1,200 to fill with diesel, there is an increasing focus on reducing fuel use in cultivations.

One option could be to use roots to improve soil, instead of metal and fuel. This is being investigated by Agrii trials manager Steve Corbett, in an eight-year trial comparing seven treatments:

One challenge has been to successfully establish cover crops on the boulder clay. Mr Corbett says he has probably seen four good crops in eight years. Problems have included lack of friable soil where seeds are, lack of moisture, and insect pressure.

This spring took two attempts to get the cover established. “It is a real art to establish them on this land,” he says.

Despite this, differences are now being seen in soil after eight years. Looking at the ploughed area, while the soil is nice and friable, it is also fragile and hasn’t got the strength to carry a drill without compaction, he explains. 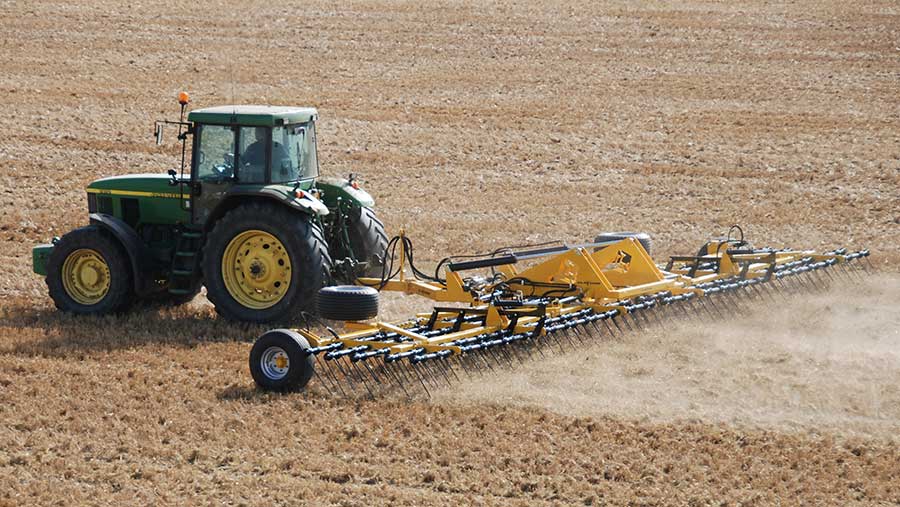 In the min-till area, Mr Corbett is seeing a compacted zone 6-7in down where the silt has settled out and is impeding rooting.

“Ideally, a low-disturbance leg would be needed to crack the layer and then use cover crops to do their work,” he says.

In the direct-drill area, soil is showing good structure and has the strength to take traffic with minimal wheelings.

Looking at six years of gross margin data from 618 plots, he is not seeing any financial benefits from cover crops, with cultivations delivering the best returns.

The best performer was ploughing, which averaged £620/ha a year, while the worst was the oil radish cover crop, which was 37% lower.

“With mustard and phacelia, we are currently seeing a £70-80/ha lower margin than cultivations. Is this a cost worth paying for sustainability?” he asks.

However, some cover crop combinations such as phacelia are starting to come right in year 6, with the gap narrowing. “Perhaps cover crops may match cultivations this year or in year 8.” 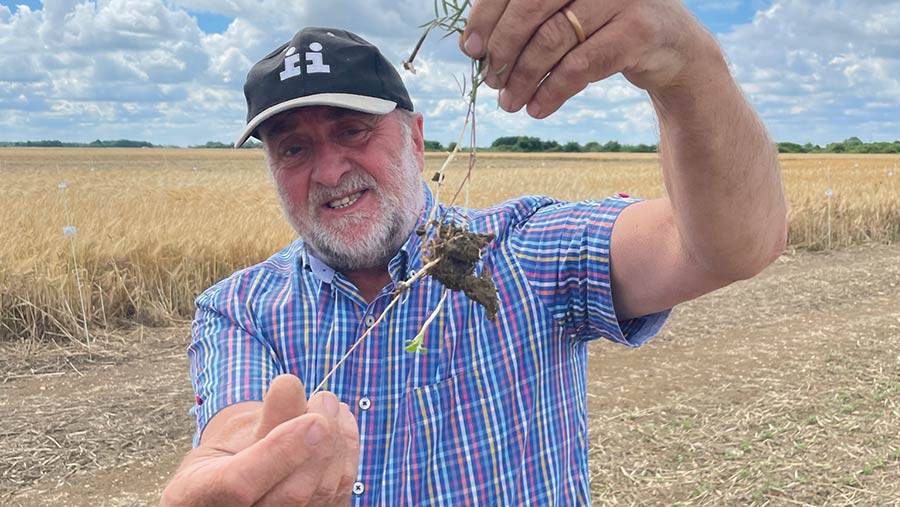 One benefit has been a small lift in soil organic matter, with the phacelia treatment at 5.1% compared with 4.2% for cultivations. No organic matter is added, with only chopped straw being returned.

“It is a long-term process to increase soil organic matter with cover crops and chopped straw,” he says.

The Centre of Ecology and Hydrology is monitoring soil biology, by testing DNA of a range of beneficial and bad microbes. “The aim is to encourage or hold up numbers of the beneficials,” Mr Corbett says.

Initial findings show that with reduced tillage, there are benefits.

“With ploughing, levels [of beneficials] are going the wrong way,” Mr Corbett says. The key question is how long-lived this decline will be if farmers are forced to plough to reset a bad blackgrass problem.

“It’s something that we don’t yet know, but work is ongoing.”

However, with cover crops, numbers are going in the right direction, suggesting they do improve soil biology, he says.

In the first year of trials at Stow Longa, mechanical weeding of wheat crops lifted gross margins by £257/ha.

Winter wheat crops drilled with a Claydon fitted with an “A” share at a row width of 250mm were hoed at growth stage 30 using a Claydon TerraBlade hoe. This is part of a cultivations trial, investigating the value of mechanical weeding in blackgrass control.

Steve Corbett, trials manager at Agrii, explains that the A-shaped shoe on the drill results in blackgrass weeds being moved into the middle of the rows.

Then, using a hoe, the blackgrass plants can be taken out in spring. At that growth stage, any blackgrass that does germinate as a result of the soil movement will be out-competed by the crop.

Hoeing was carried out twice, once in one direction and then in the opposite direction a few days later.

“Blackgrass can be controlled well with a hoe because of its shallow roots,” explains Mr Corbett. “Both ryegrass and bromes are deeper rooting, so hoeing will have less effect on these grassweeds.”