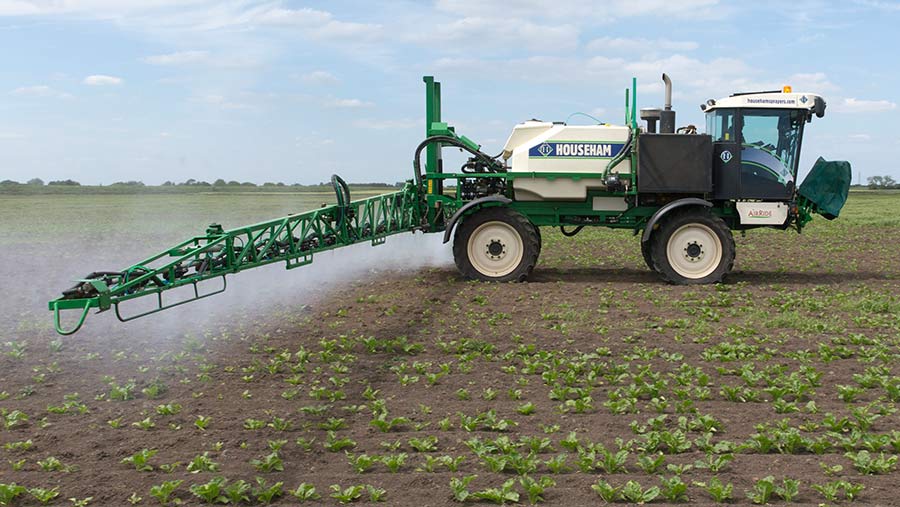 As a result, growers should take time to review current strategies and plan to incorporate a wider range of active ingredients into programmes next year.

That is the view of independent agronomist and Sentinel product manager Martyn Cox, who points out that a number of key products are being limited, lost or under threat from withdrawal.

Cost effective pre-emergence herbicide chloridazon is a useful option for holding back early weeds, taking pressure off later applications and potentially allowing growers to cut out a post-emergence spray or use lower rates.

However, the active is being withdrawn next spring and, combined with the removal of lenacil-containing Venzar’s pre-emergence recommendation, it means there are just two pre-emergence actives available.

These include ethofumesate, but with a rotational limit of 1kg/ha over a three-year period, its use will have to be carefully planned to avoid exceedances.

This is particularly true where sugar beet is being grown on heavier land to manage blackgrass and the active is likely to be applied to other crops in the rotation, such as wheat.

The second pre-emergence option for sugar beet growers is metamitron, but products containing the active have also experienced restrictions in recent seasons.

“If you put 2 litres/ha on as a pre-emergence application, it doesn’t leave growers much to play with for post-emergence residual top-ups,” explains Mr Cox.

He adds that Goltix helps control acetolactate synthase (ALS)-resistant oilseed rape volunteers where Clearfield varieties are being grown, so being able to use less herbicide might see growers run into issues with this tough-to control weed.

“[ALS-inhibitor] Debut [thifensulfuron-methyl] will struggle, so we are starting to see these restrictions and rotational issues making sugar beet weed control more complex. It is like creeping shellfire – there is a slow erosion of options and more pressure is placed on what we have left,” explains Mr Cox.

In addition to Venzar (lenacil) having a pre-emergence recommendation removed from the label, its maximum individual and total doses have dropped from 5 litres/ha and 6.3 litres/ha to 0.4 litres/ha and 1 litre/ha, respectively.

The active has also been limited to a maximum limit of 500g/ha over three years to the same field.

Mr Cox says this further reduces post-emergence residual top-up capability, and with uncertainty over the future of phenmedipham and desmedipham – which underpin weed control programmes in sugar beet – it is wise to establish how alternatives fared this spring.

They are used at early post-emergence and are strong on weeds such as cleavers, dead nettles and fool’s parsley.

ALS herbicide-tolerant sugar beet varieties from KWS also have the potential to help in weedy situations when available next season, but Mr Cox says this needs to be carefully managed to avoid putting undue pressure on one chemical group.

“We already have ALS resistance in grassweeds such as blackgrass and ryegrass, and broad-leaved weeds such as poppy, so it will need to be backed up with alternative modes of action,” he says.

Sentinel is a decision-support tool linked to Gatekeeper crop management software, a program that helps arable farmers with record-keeping and legislation issues.