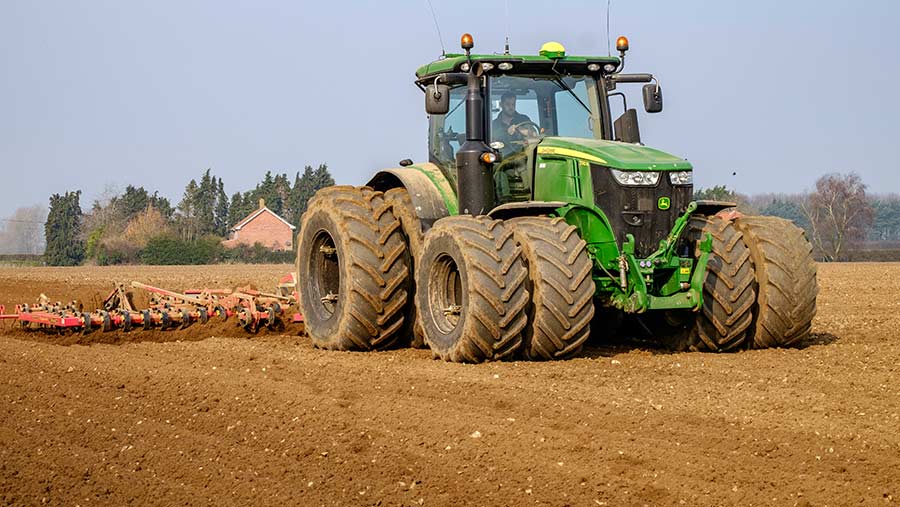 It proved to be the 2,000ha farm’s best-ever result with sugar beet, with the almost perfect growing conditions throughout the year helping the whole farm’s average beet yield to hit 112t/ha, according to Mr Jones, who is the farm’s crop protection team leader.

The winning 20ha field entry was grown as part of a 100ha block of the crop which averaged 114t/ha. In total, the business has about 300ha of sugar beet, the majority of which is being grown on a three-year contract for British Sugar.

It is an important crop for the farm, even though some of the soils are considered to be a bit heavy for beet. As a result, seedbed condition is a priority at drilling and there is a focus on soil health throughout the seven-year rotation. 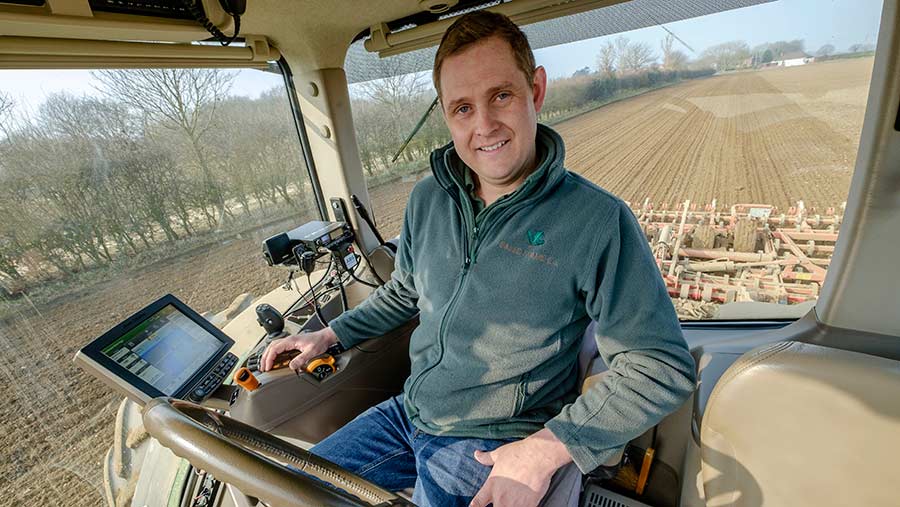 This rotation – which was introduced by farming director Poul Hovesen – is central to Salle’s policy. Sugar beet follows winter wheat and always benefits from an application of turkey muck and a preceding cover crop; both of which help with nutrient capture and recycling, as well as soil structure.

As Mr  Jones points out, the season did give him a helping hand in 2017, but getting high-yielding sugar beet crops takes more than luck with the weather. The basics required for optimum performance have been in place at Salle for a while, in line with its long-term sustainability goals. 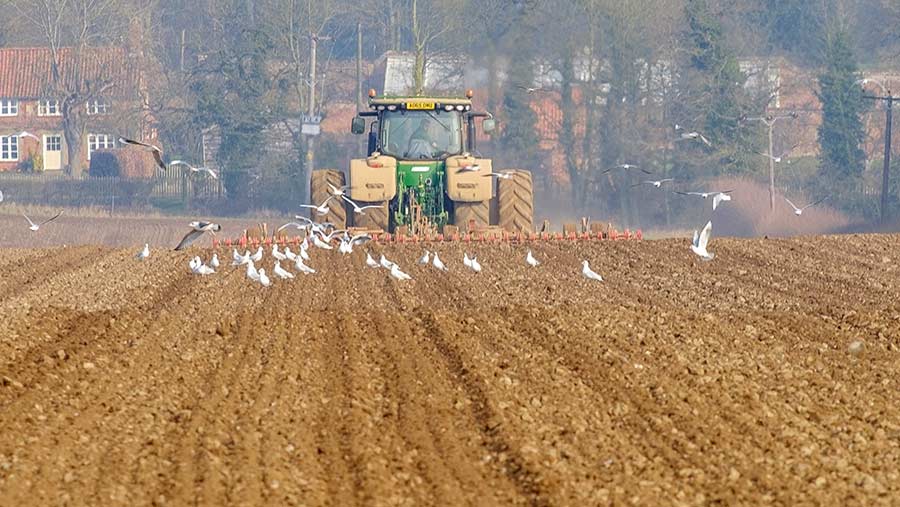 “Soil health is a fundamental requirement,” he says. “That’s something that can’t be implemented overnight. We have always had an integrated policy of liming twice in the rotation, using organic manures and making strategic use of cover crops.”

All of these measures contributed to the farm’s success in the competition. Being part of the University of East Anglia’s demonstration test catchment research programme has shown the farm the yield contribution made by cover crops, Mr Jones adds.

“It has also highlighted how they reduce nutrient leaching through the winter and increase soil organic matter – all of which help to release nutrients to the following crop and unlock yield,” he says.

The cover crops are established in late August, after turkey muck has been spread. An oil radish/black oat mix is drilled with a Vaderstad Opus and bio drill, providing the main cultivation for the following spring’s sugar beet seedbed.

As the seedbed is such a key component of sugar beet performance, the farm has a policy of destroying the cover crops in December with a glyphosate/2,4-D mix, before using a Vaderstad NZA cultivator ahead of drilling.

“When the soil is dry and warm enough for drilling, we use a Lemken Kompactor if required and will do an extra pass where it’s needed,” he adds.

In the same way, seed rates will be increased if conditions are less than perfect, so that establishment is not compromised.

Commenting on the winning 2017 entry, Mr Jones recalls that it was drilled on March 26 at a seed rate of 1.2 units/ha, with a Kverneland Monopill drill.

“As always, we aimed for just over 100,000 plants/ha established, as we know how essential plant population is to the final result,” he says.

A full pre- and post-emergence herbicide programme was used on the crop, to ensure that it got to the critical six leaf stage without competition, and then remained on course for high yields.

Two fungicides were used in 2017, applied at the end of July and again in late August, with the programme based on an azole/strobilurin mix to optimise both disease control and green leaf cover.

In terms of fertiliser, the aim was to provide 120kg/ha of nitrogen to the crop, so the nutrient value of the turkey muck was taken into consideration before any applications were made.

Otherwise, the crop received an early application of manganese, as the farm has a history of deficiency in this micronutrient.

Harvesting of the winning field was done on 24 November, with the rest of the crop all being lifted by Christmas.

“We aim to limit harvest losses by owning a Grimme Rexor beet harvester, which is used to lift a total of 1,000ha of beet across two other light land farms,” Mr Jones says.

“This policy gives us the flexibility to lift on the correct days and not in the wet.”

He adds that every operation has to be spot-on to achieve the very even, vigorous crops that Salle is aiming to grow.

Machinery capacity plays an important role in the current volatile weather patterns, he believes, as cultivations and drilling have to be completed in very small windows when soil conditions are right. The same is true of spraying.

Close attention to detail, highly skilled operators and timely operations have been central to the farm’s continual improvement in yields. Initiatives such as the BBRO yield competition are used to keep learning and share best practice.

“We entered again in 2018. The results haven’t been finalised yet, but the field we entered yielded 87t/ha, due to lack of summer rainfall. Overall, our yields ranged from 60t/ha from September lifting to 90t/ha in early January,” says Mr Jones.

He also credits the training programme at Salle for developing skilled operators capable of working at a high level.

“The team does an excellent job and all are encouraged to use their initiative. Two-way communication is working well and it means that nothing gets overlooked, so timeliness with our operations is also spot-on,” he adds.

Mr Jones readily accepts that the team at Salle will have to be out monitoring crops very closely this year, given the threat posed by virus-carrying aphids.

Growing sugar beet without a neonicotinoid seed treatment will require more vigilance, he believes, but it is a challenge that he is prepared to take on.

“Getting the crop to 12 true leaves is going to be very important. After that, aphids aren’t a problem. We will be using water pans in the crop as an early warning of aphid activity and will be using the BBRO forecast and tools to help,” he says.

He also intends to work closely with the farm’s agronomist, so that they can come up with spray programmes that are less reliant on herbicide stacking and won’t check crop growth.

“If aphid thresholds are breached, we do have a spray option, but the timing will be critical. We will hope for a helping hand from the weather,” he says.

The farm’s policy of destroying cover crops in December means that there is less likely to be a transfer of over-wintering aphids and the use of block cropping keeps oilseed rape, which can also harbour aphids, away from sugar beet crops.

The aim of the Beet Yield Challenge is to get growers, agronomists and researchers working together to find out how to improve sugar beet yields and to share best practice.

In its first year, there were 30 entries, with two-thirds of the crops returning more than 90t/ha – reflecting the very favourable weather conditions which drove rapid and vigorous crop canopy development, allowing many of the crops to achieve more than 70% of their yield potential.

“It was a phenomenal year,” says Simon Bowen of BBRO. “It meant that the entries were good crops and very good crops, with attention to detail at every key stage of production being the difference.”

Some key findings from 2017 were the importance of achieving the recommended 100,000 plants/ha and the positive effects of using organic manures – with both overall yields and the ability to achieve yield potential being improved where organic manure was applied.

In 2018, the second year, entry numbers were up. Those are still being assessed and judged, with the winners expected to be announced in June.

Commenting on the forthcoming 2019 Beet Yield Challenge, Dr Bowen is keen to see more growers take part across all four factory areas, so that the learnings can be used to drive better performance and the adoption of best practice.

“There are going to be more challenges to overcome, whether that’s from greater aphid pressure and the loss of key active ingredients or from increasingly unpredictable weather,” he says.

The challenge is about managing the resources that growers have at their disposal to the best effect. UK sugar beet crops have produced 145t/ha, yet the average is about half of this yield.

“We know that there’s more to come – it’s not about a one-size-fits-all approach, but tailoring management to crops as the season progresses,” he says.

To enter this year’s challenge, or for more information, email BYC@bbro.co.uk