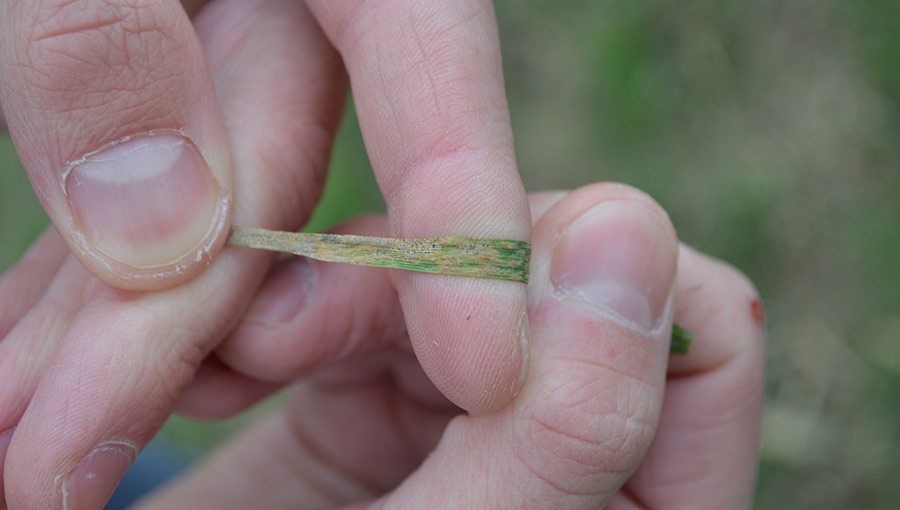 Wheat crops in Dorset are starting to show widespread levels of septoria, with one expert planning his fungicide strategy to keep the crop’s biggest yield-robbing disease under control.

Agronomist Todd Jex of agronomy group Agrii says the wet-loving disease has developed quickly due to the mild winter followed by rain during February in his area of Dorset and southern Wiltshire.

“For this time of the year, there is an awful lot of septoria around in crops, even those that were late drilled,” he tells Farmers Weekly.

Worryingly, those winter wheat varieties with good resistance to the disease, such as Crusoe, and which were drilled in late October, are seeing high levels of septoria, adds Mr Jex.

“Even in varieties with good resistance to septoria we are seeing the disease more than we would have thought,” he says.

Good establishment in the mild autumn has produced crops with lush leaf canopies leading to high humidity levels within the growing crop. This has helped the spread of disease.

He is suggesting with plenty of septoria around it may worthwhile using a protectant fungicide like chlorothalonil along with a systemic azole, such as prochloraz or tebuconazole, for a T0 fungicide spray, which is usually applied towards the end of March.