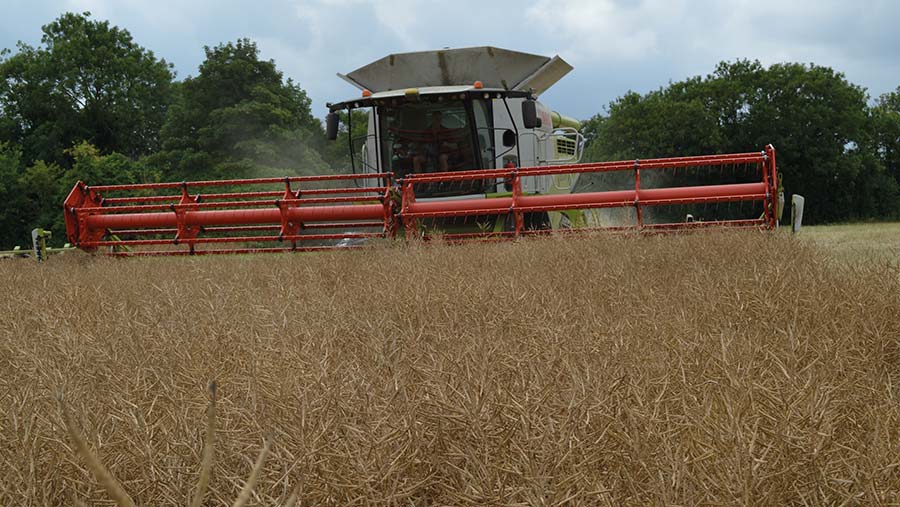 James Loder-Symonds is setting ambitious targets for his Kent farm as he prepares for a future based on enhancing natural capital, delivering public goods and becoming carbon neutral.

Good progress has been made at Nonington Farms, a Linking Environment and Farming (Leaf) demonstration farm near Canterbury, with the business seeing variable costs cut by 30% last year, following a decision to focus on soil health.

Mr Loder-Symonds says the direction of travel for farming’s future has been clear for some time, so a move to regenerative agriculture and a whole-farm approach to crop management was already under way.

“We used to be driven by yield, operating a high-input, high-output system. The last few years has seen a move away from that, so that we are now profit-led,” he says.

“We are also always looking for ways to reduce our carbon footprint and ensure we are meeting our environmental responsibilities. Our aim is to become carbon neutral within three years,” adds Mr Loder-Symonds.

Nonington Farms is a mixture of owned and contract farmed land, covering an area of 1,240ha in East Kent, about six miles south-east of Canterbury.

With its “learn, grow, protect” slogan, the farm also hosts school visits and is committed to environmental management. At least 10% of the area is in stewardship schemes.

In addition, companion crops are being grown with oilseed rape, resistant varieties are given preference over susceptible types, and end markets are being selected with the farm’s carbon footprint in mind.

The rotation is flexible, but almost half of the farm is in winter wheat, grown for milling markets. Wherever possible, catch crops are grown before second wheats and winter oats, to help keep soils biologically active and improve their structure.

Mr Loder-Symonds also makes good use of wildflower and wild bird mixes as part of his ongoing stewardship agreements, which are in place on more than 15% of the area, providing a valuable income stream and planned transition to Environmental Land Management (ELM) schemes.

The farm’s main crop, milling wheat, was chosen for its ability to add value through premiums and suitability for the domestic market, avoiding the food miles associated with some other outlets.

Recent success in the Yield Enhancement Network’s milling wheat quality award with a 12t/ha crop of Zyatt shows the high standards achieved, while Leaf Marque accreditation indicates the importance of care for the environment.

“That environmental focus is only going to intensify as we embrace ELM schemes and keep moving forward. We recognise that yields may suffer a bit,” he says.

As changes have been made, attention to detail has become key, with crops being assessed and treated on a field-by-field basis, according to their potential.

“Like every farm at the moment, we are looking at becoming more efficient. Our commitment to growing milling wheats means that nitrogen-use efficiency is a big topic for us. That may mean being more realistic about yield potential in future,” he adds.

With soil biology working well, he has been able to reduce the use of artificial inputs (see “Variable cost reductions”). Becoming part of a buying group has helped with cost control, while taking part in benchmarking has also highlighted areas for improvement.

His next target is nitrogen fertiliser, which he acknowledges will be difficult. Variable-rate applications are used to target the nutrient to potential, while the chance to participate in a trial of a sustainable wheat contract, which rewards 12.5% protein rather than 13%, is allowing him to move away from using foliar urea fertiliser on the wheat ear.

“This type of contract is a step in the right direction. If a bigger market for 12.5% protein wheat opens up, it will ensure better nitrogen utilisation,” he says.

Mr Loder-Symonds is also considering the use of four splits of nitrogen on the crop this year, to ensure the nutrient is readily available when it is needed.

“We are experimenting all the time so that we keep learning. We’re dealing with what we can influence, while keeping an eye on future requirements,” he adds.

Last year, no phosphate and potash inputs were required, with living roots helping with nutrient cycling and getting the most from the natural soil resource.

Only oat and barley straw is removed – the rest is returned to the soil, with organic manures also being applied, to build up the natural soil microbiology. Getting the soil pH right has also helped, so that nutrient lock-up is avoided.

In his crop-growing practices, non-chemical control methods were put in place, with plant genetics, drilling date and other cultural control techniques being exploited.

“We grew the BYDV-tolerant winter barley Amistar to eliminate insecticide use. We have opted for Wolverine – the BYDV-resistant winter wheat – this year, for the same reason. We have also gone for Extase, with its very good septoria resistance,” he says.

Spraying is used as a last resort, with the weather giving Mr Loder-Symonds a helping hand in 2020.

“The crops were drilled later due to the very wet autumn, and then a dry spring helped keep disease pressure low,” he says.

This year, he has set his sights on going further with variable costs, and has identified five areas where changes could be made: