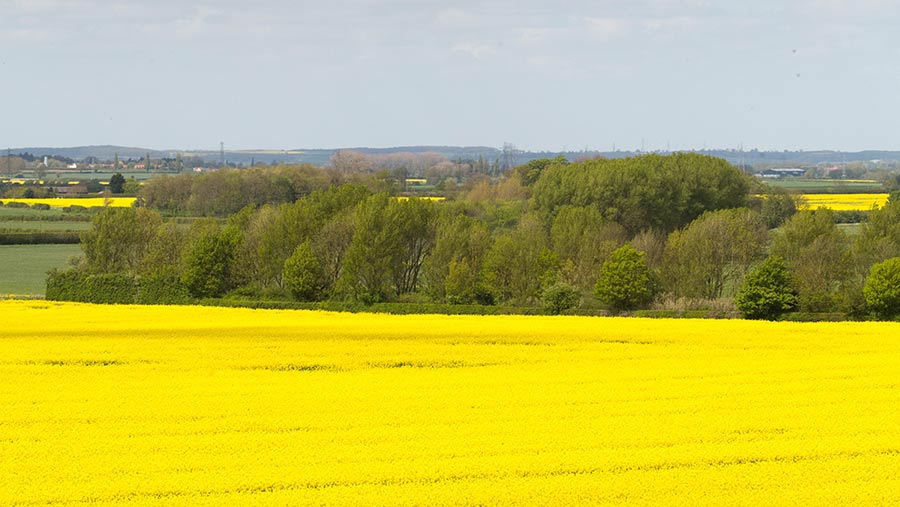 With 404ha of combinable crops being grown across a range of soil types, yields can be limited on the lighter, drought-prone soils in dry years, while flooding is also a threat to output on around 80-100ha of land that adjoins the River Ouse.

Soil variability is part of the planning process at the new Northamptonshire AHDB Monitor Farm.

On the flood plain land, silt over gravel and sandy gravel soils predominate, while other soil types like sandy clay loam, brash and clay loams are found across the two farm sites operated by MTH Davies from its Clifton Reynes base.

Given those constraints and recent unpredictable weather patterns, Mr Davies is clear about his cropping strategy. “We can’t always get the highest yields here, so we need the premiums.”

As a result, his winter wheat is all in Group 1 milling varieties, his high-oleic, low-linolenic (Holl) oilseed rape is grown for the specialist oil market and his spring barley is on contract to Budweiser.

“It has worked well for us in most years,” he says. “The only crop under review is the Holl oilseed rape – the premium dropped right back from £25/t to £8/t last year, making it borderline. The £90/ha cost of the seed makes it hardly worth doing if there’s insufficient reward.”

Another consideration is that his oilseed rape yields have dropped in the past two years. “Whether that’s due to the Holl varieties, or a combination of other factors, I’m not certain.

“To check, we have also got some conventional oilseed rape varieties, Campus and Elgar, growing alongside the Holl type V316OL, to see if they can do any better.”

An alternative could be high-erucic acid (Hear) oilseed rape, with its £60/t premium, he says. “That figure includes the oil bonus. The seed cost is £70/ha, which is slightly better than Holl seed.”

All of the winter wheat at Newton Lodge Farm is in Group 1 milling wheat varieties, which include Gallant, Crusoe, Skyfall and Zyatt. The farm has a good track record of hitting the full milling specification and supplies local firm Heygates.

“The variety mix works well,” says Mr Davies. “The oldest variety, Gallant, is useful because its early maturing, so we get it cleared first at harvest.”

“It’s not unknown for us to grow a third wheat,” he says. “But we are looking at widening out the rotations if we can, perhaps bringing in a pulse crop. We’re also going to try a cover crop between the two spring barleys this coming year.”

Explorer spring barley is grown on contract for Budweiser through Glencore and suits the farm well. As well as being very competitive against blackgrass, it has yielded as much as 9.8t/ha in the past.

“It tillers well, so with the right seed rate we find that it really helps with blackgrass. The ground is moved in the autumn, so that we can go straight in with our Claydon drill in the spring.”

“This year, it went in a month too late. The upside of that is reduced expenditure on the crop, especially herbicides, but the delay is likely to have reduced yields. We’ll see when the combine goes through.”

Being a fourth-generation family farm has given Rick Davies and his father the time and energy to pursue other enterprises and make the most of diversification opportunities.

Time and money spent converting old pig buildings mean that 14 office lets and four light industrial units are an integral part of the business, with 52 container storage units being a more recent addition.

In addition, a box beef scheme makes best use of the farm’s 25 Red Poll cattle, which are extensively grazed, while a contract Avadex (tri-allate) spreading operation has been set up by Mr Davies and covers the local area.

His brother George runs a separate turf business from Newton Lodge Farm, building it up over the past 18 years to include three depots, six lorries and 17 staff.