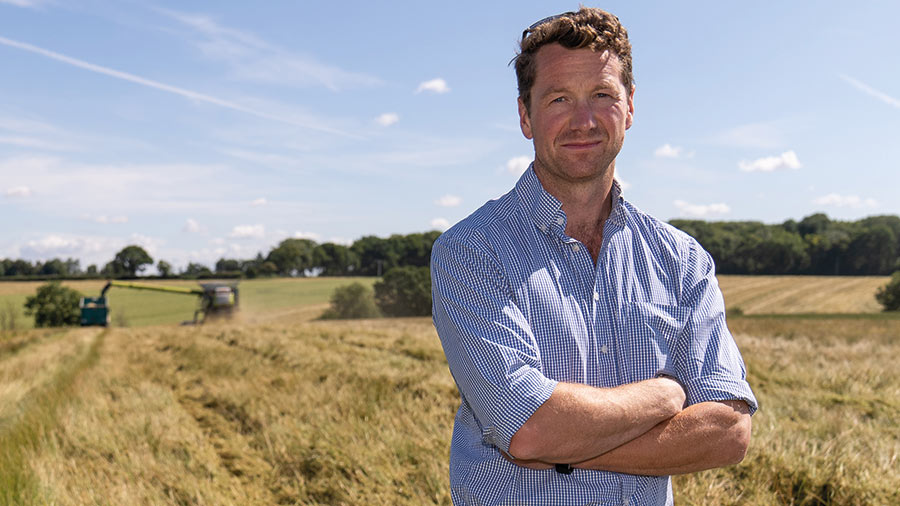 Herbage crops are a valuable part of the Rooksnest Estate arable rotation and to maximise the benefits to soil health, its estate manager is investigating ways to establish following crops without using a plough.

The grass ley is primarily grown for seed, but Robert Price, Farmers Weekly’s Arable Farmer of the Year 2020, adds value by selling hay to local racehorse yards in the Lambourne Valley and fattening lambs.

Grass leys bring benefits by building soil organic matter levels and promoting worms. However, ploughing would be detrimental to both.

Mr Price also doesn’t see it working for the farm when considering the £150/ha ploughing and power harrowing cost.

So he is looking at alternative ways of integrating arable crops, and one option is to establish oilseed rape into the crop.

However, compaction can be an issue given the combination of two years of seed production with the 7.5m stripper header not fitting in with the 36m controlled traffic farming, as well as trafficking by grazing lambs and during hay making.

Therefore, he is looking at some form of low-disturbance strip cultivation in front of a direct drill to establish oilseed rape after grass seed before being in wheat the season after.

Mr Price is a partner in a fully irrigated family farming business in the Canterbury Plains of New Zealand, where herbage is often part of arable rotations, so he already knows that wheat doesn’t perform after herbage as well as OSR then wheat after herbage.

Sunflowers are set to make a debut at Rooksnest Estate with plans to establish a 12ha trial crop for bird seed.

Robert Price is trialling commercial sunflowers to be bagged up and sold, but thinks the UK may be a few years away from having the right amount of heat units. If it fails to make seed it will make great winter bird feed.

The estate currently feeds birds as part of its stewardship using 5t of sunflower hearts.

So he thought why not grow it rather than pay extortionate prices for the seed. He has also secured a buy-back contract with Robin Appel.

He highlights that it is a cheap crop to grow requiring just a pre-emergence herbicide plus 150kg/ha of di-ammonium phosphate (DAP) down the spout.

The aim is to establish seven plants/sq m, thanks to Horsch which has helped by supplying a precision planter.

But the one unknown is botrytis, being a disease problem that can strike crops in the autumn.

He is also trialling 15ha of blue peas direct drilled into existing grass. “If it doesn’t work out, we will end up with a pea and grass mix – which is an excellent cattle feed.”

Peas don’t like compaction, so again he is strip tilling using a low-disturbance tool bar to help break up the compaction.

He then hoped to follow it with a good crop of wheat, boosted by the nitrogen fixed in the soil by the peas.

Machinery-wise, he is thinking of an Horsch Avatar SD or a Bourgault frame-mounted strip drill – which will complement the existing system based on one to two passes to create stale seed-beds – and a Horsch Serto drill.

The aim is not to move too much soil because of blackgrass and natural organic matter building in the soil.

For the drill, he would ideally look to share it with a neighbour, spreading the costs.

Another planned change to the estate’s cultivation strategy is the move from a disc-based cultivator to a tine-based one to tidy up the headlands.

Mr Price is really pleased with the benefits of the 36m hybrid controlled traffic farming system and is seeing the benefits in soil structure. “The spade is going into the ground more easily,” he reports.

However, the headlands still need improving and Mr Price is looking to replace the Horsch Joker with a Horsch Cruiser.

Switching from one large combine to two mid-sized machines plus a chaser bin proved itself last summer, with harvest being completed two weeks earlier.

Cutting the 1,800ha finished on 10-12 September instead of the usual 24 September, around the normal time that the Newbury Show is held.

In addition, the greater flexibility with two combines helped secure premiums by harvesting crops more timely. This is especially important for the milling oats, blue peas and milling wheat.

He also saved on drying, which Mr Price calculates to be about £7,000 last harvest.

However, he adds that the mild, damp conditions meant he had to condition grain more on the drying floors, so some of this saving went on the extra electricity running the fans.

Herbage is part of the diverse mix of cropping, which includes other break crops such as peas on the lighter land, linseed and OSR.

It is a particularly valuable break crop as it offers three sources of income with the seed plus two by-products – hay used for racehorses and fattening lambs.

Mr Price has doubled the herbage area, which now stands at 130ha including undersown crops, out of a total cropping area of 1,800ha.

In future, he says the estate may look at other niche seed crops such as sanfoin or recreational grasses for turf.

One key development for herbage crops this season is a new plant growth regulator.

Ideally, you want crops to stay upright all the way through the season and then lodge at harvest,” explains Robert Price.

This makes it easier to harvest with a stripper header and results in fewer losses.

For this season, herbage growers can use Medax Max, after being granted an extension of authorisation for minor use. It contains prohexadione + trinexapac-ethyl.

He plans to use this alongside Moddus (straight trinexapac-ethyl). At growth stage 30, crops will receive Moddus and then at growth stage 51, he will switch to the new product.

However, this plan has already been thrown out the window this year due to the very odd spring.