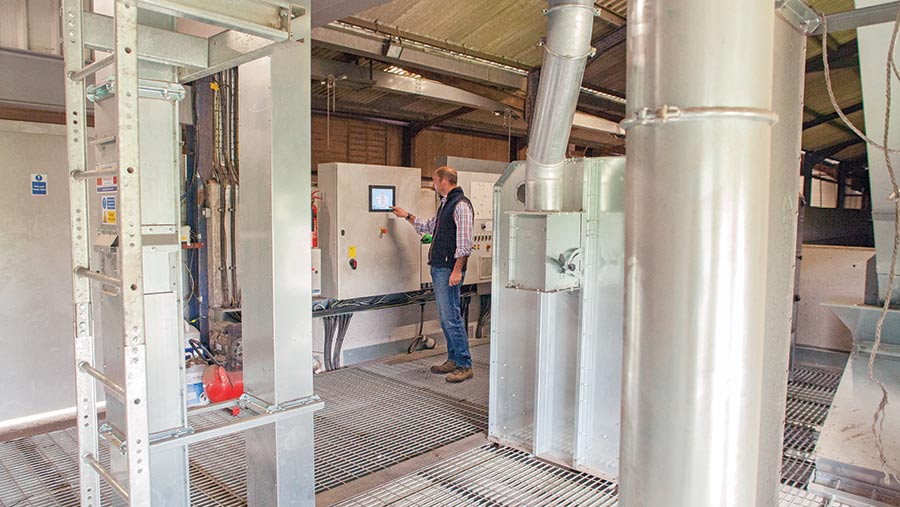 A £380,000 investment in a West Sussex farm’s grain drying and storage facilities has made a huge difference to harvest logistics, allowing it to cope with two combines in a wet year and avoid any delays.

When harvest operations are in full swing and two 40t/hour combines are operating, the 100t/hour intake trench and 41t/hour Perry tower dryer means that grain is moved and processed seamlessly, with minimal supervision.

It has also given G Chandler Farming a specialism, so that the business now offers grain storage services to neighbouring farms, recouping as much as 50% of the drying costs incurred on its own grain and making sure that it meets premium-earning specifications.

Now in its fourth harvest and offering the capacity to store 6,000t in total, the inclusion of solar panels on the grain store roof helps to subsidise the operation, while remote monitoring means that the system can be operated from a mobile phone if key personnel are called off-site.

See also: How to build a new grainstore in budget

Back in 2015, when the decision was made to upgrade the facilities on the Petworth farm, Mark Chandler was combining 1,245ha and struggling to cope with a 5t/hour intake pit, a 30t holding bin and an Alvan Blanch dryer with a throughput of 15t/hour. 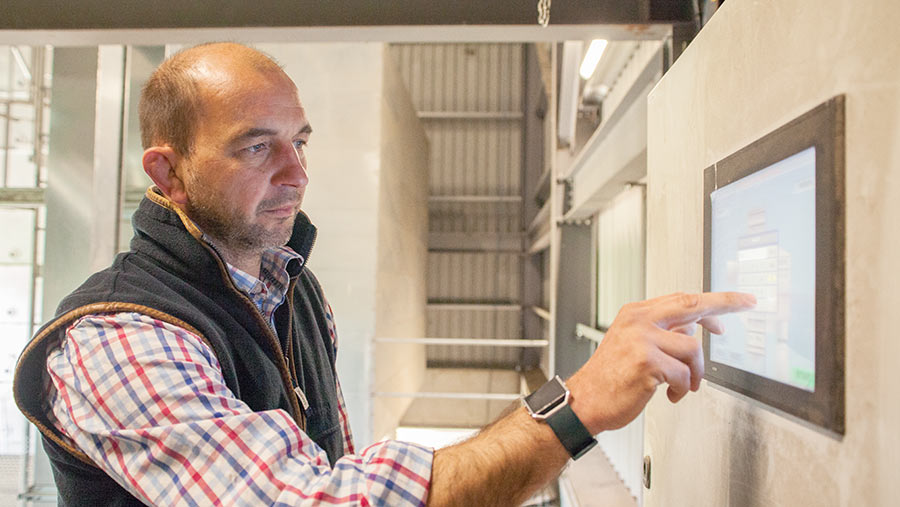 As a result, grain had to be tipped into a shed and then moved by a forklift bucket – something that took up all of his time at harvest.

“We had outgrown it. The dryer was the bottleneck, as its capacity didn’t match that of the rest of the system, making it very hard work. Our acreage had doubled since it went in and yields had increased, so we needed to make changes,” he says.

Planning the current system started after the very wet harvest of 2012, when the limitations of the old system were really exposed.

Initially, Mr Chandler looked at hopper bottom bins that could be used with the existing dryer, but soon realised that he needed more to be able to deal with wet grain effectively and prepare for future expansion.

Having investigated intake trenches, he decided to install one with the capacity for 100t/hour across the length of a converted straw shed, so that it became a self-emptying and self-feeding store.

“It makes the shed operate as a bin. It’s a flow and return system – the intake trench feeds the tower dryer, which can deal with 41t/hour at 17%, recycling any that needs further drying back in to the shed,” he says.

Making the existing building fit for its new purpose was fairly straightforward and included having to strengthen the walls, before the dryer could be installed and housed.

The output from the dryer is conveyed to a 3,000t grain store with six bays, allowing it to be segregated according to the intended market and making it much easier to move grain around.

There’s also a cleaner/grader on the dryer, so that markets can be guaranteed.

An automatic function on the dryer is rarely used. “Drying is an art form. So I tend not to use it. We are growing seed crops, which we prefer not to dry so that their germination isn’t affected, as well as milling wheat,” says Mr Chandler.

Having cut some Illustrious at 21.5% moisture in very unsettled conditions to protect its Hagberg, he aims to combine at under 20% as far as possible. “In that situation, it took around 5,500litres of diesel to look after the milling premium,” he adds.

A 2,000t grain store put up in 2013 was fitted with Lishman grain pedestals and there is a further 350t of on-floor drying – suitable for the farm’s pulse and soya crops.

A grain butler stirrer is kept as an emergency measure, so that any hotspots can be eliminated.

The original investment has made a huge difference to the business, summarises Mr Chandler.

“We made use of existing sheds as much as possible, ensured that the new facilities could cope with wet harvest and more land, as well as getting technology to do much of the work.”

Of the 1,245ha combined by the farm, half of the incoming grain is from the home farm, while the rest comes from five contract farming agreements.

As there is a weighbridge at Moor Farm, the grain all goes into one big heap before drying, with the tonnage and moisture of every trailer load recorded on a spreadsheet.

Mr Chandler then applies a fixed charge for drying – £5/t standing charge and then £1.50 per percentage point removed – so that at the end of the year he can see the total cost of drying every crop and then charge everyone an acreage fee.

Storage is then an additional £5/t from harvest until the end of December, then an extra £1/t/month thereafter.

He also keeps one bay free to offer some contract drying, which has been a popular option this harvest.

His oilseed rape goes into a harvest pool, in order to free up storage. Variable results with the crop in 2019 will see him stick to conventional varieties for 2020, establishing it cheaply and refraining from using pre-emergence herbicides.

This year, he is extending the rotation by including two years of spring cropping, so that winter crops benefit from longer gaps and grassweeds are contained.

“We’re expecting some short-term pain for long-term gain,” he says.

Soya, which has been grown for the past two years, is one of the beneficiaries of this change, with Mr Chandler increasing the area from 25ha to 80ha.

“Our soya yielded 2.64t/ha last year, so we’re sticking with it and increasing our knowledge on it all the time,” he adds.

Hybrid winter barley has also been included in the last year, as it creates the perfect entry for oilseed rape and helps with blackgrass control.

Traditionally, his winter wheat has been an equal split of seed, Group 1 and Group 3 crops. That’s also changing, as he has plans for 90% to be grown for seed for a £30/t premium.

“It’s a guaranteed market. The same can’t be said about some of the other grain markets at the moment.” he says.