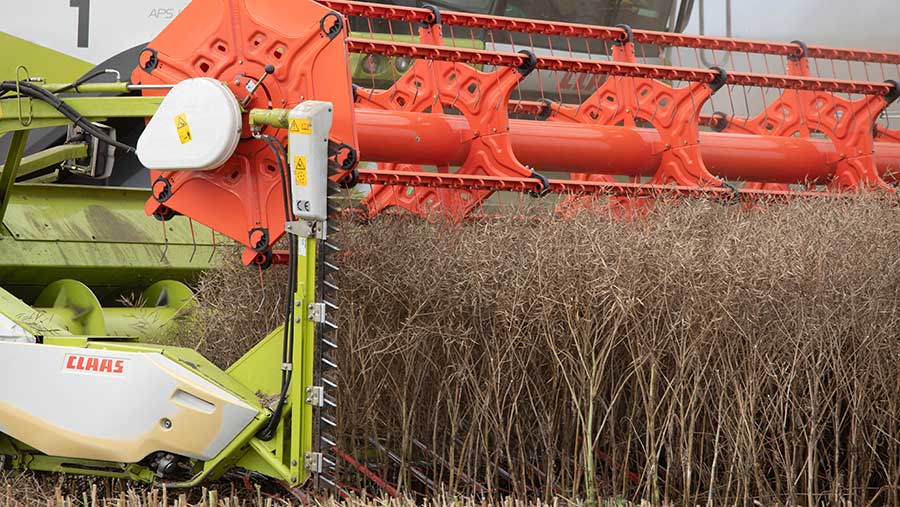 Harvest is getting under way across much of southern and western England, with early reports of variable crops and anticipated, but disappointing, oilseed rape yields

It is early days for harvest in Devon, with some fears for overall quality based on the first few loads to Devon Grain. But things are improving, according to store manager Duncan Lyon.

With only 250t of oilseed in store so far, the best news is that it has come off dry, at just over 8% on average. “Oils are a down, but it’s early days.”

For both crops, reports indicate that the headlands have suffered most, adds Mr Lyon.

“It’s broadly in line with what was expected for the year; I haven’t heard of any absolute disasters, but yields will be down on the five-year average.”

In Somerset, harvest is starting to get under way, according to John Collins, grain store manager at Cannington Grain.

“It’s been a steady start but the barley isn’t yielding that well – near 7.4t/ha.”

Specific weights have come in as low as 56kg/hl on six-row varieties, but other crops have achieved up to 72kg/hl. “It has really varied – depending on how the ground held water and how the crop established,” says Mr Collins. “It’s all over the place.”

“The good news is that crops have come off fields nice and dry, with moisture levels at 14.9% in barley and 8.4% in oilseed rape,” says Mr Collins. “So there won’t be any drying charges.”

Yielding 10-11t/ha, with bushel weights up to 70kg/ha and nitrogen content of 1.4-1.5%, it has done better than expected. “What’s come into store has been super,” Ms Lawrence says.

Feed barley has needed very little drying and has good bushel weights, with nothing under 63kg/hl.

But oilseed rape has been mixed. “Some crops were pleasantly surprising and others yielded poorly – about 2.5t/ha,” she adds. It has mostly come in clean, but some crops have had red seeds in them, while oils are again disappointing; around 43-44%.

“We have seen some Craft malting barley which had a nice bold sample with lowish nitrogen at 1.7% – but the yield was average.”

Oilseed rape has been a mixed bag, as expected, he says. Yields have averaged 3t/ha, but some crops are coming in below 2.5t/ha with oils around 42-44%.

“We knew oilseed rape would be disappointing, but the good news is that the winter barley quality is reasonable.”

It is a different picture in Gloucestershire as the combines are only on the cusp of rolling, according to Philip Smith at Western Arable Services.

“It was so wet in the autumn, harvest hasn’t really started yet. We are expecting barley yields to be average, at 6.2-7.4t/ha, and we have had one sample with a specific weight of 64.4kg/hl and 15.5% moisture.

“I think the theme of this harvest is going to be variability, but the rain and sun in June and July should, hopefully, have been perfect for our spring crops and the spring barley could surprise us in terms of quality.”