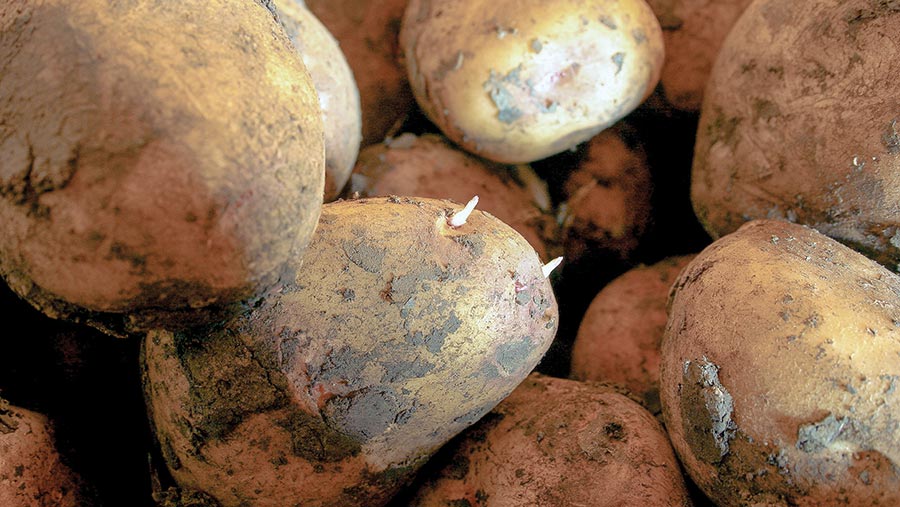 Spearmint oil has the potential to play a more prominent role in sprout control programmes post-CIPC, but users must prepare stores adequately to ensure success.

Marketed by Kent-based Juno Plant Protection, Biox-M – a 100% spearmint oil product applied as a hot fog – made it to the UK in 2012.

Initial interest was in fresh sector, organics and in new stores, where managers feared for CIPC’s (chlorprophams) future and wanted to avoid long-term contamination of buildings.

One option was to apply more CIPC to stop sprouting, but CIPC did not have any effect on historic sprout growth.

Initially spearmint oil was used to salvage these crops, as one effect is that it physically burns back developed sprouts, and any remaining tissue tends to fall off during grading.

“We immediately saw the benefit, as it was a way of turning potatoes that are very difficult to market into potatoes very easy to market.

“It could be the difference between getting £80/t and £200/t for the crop, which more than covers the cost of treatment,” he explains.

Now there is no CIPC available after its withdrawal, Mr Nelson says Branston will be relying on well-functioning cold stores set at 3C, which alone gives very good sprout suppression, plus one to two applications of Biox-M only if, and when, sprouting occurs.

This will be backed up in some maincrop varieties by an application of maleic hydrazide (MH) – a foliar applied plant growth regulator – to give a base level of sprout suppression before loading into store.

The only issue Mr Nelson has come across using spearmint is the potential for potatoes to carry an odour into packs, so any final application to burn back sprouts and extend shelf life is carried out three weeks before packing where logistically possible.

While a large producer and packer of fresh potatoes such as Branston adopted spearmint oil early and is happy to rely on it for its in-store sprout control, those storing processing crops have little experience of using it in the UK so far.

Farmers Weekly understands that some commercial work has been carried out by major processors this season, but when approached, none would comment publicly on results.

The only insight available is from work carried out at AHDB’s Sutton Bridge Crop Storage Research facility – detailed in its report on the efficacy of alternative sprout suppressants – which shows that spearmint oil can provide effective control, but a major concern is cost.

At four or five times the price of CIPC for each application, and with crops in long-term ambient air-cooled storage potentially requiring five or more applications, costs could soon spiral.

However, UK distributor Juno Plant Protection’s Nick Tapp says a peer reviewed study in Israel – where they have been using Biox-M in processing crops for several years – suggests that multiple applications of spearmint oil can significantly reduce weight loss.

“It is very hard to prove in a commercial situation, but where weight loss is reduced and you load 100t into a store in October and unload 95t at the end of the storage period instead of 92t under a CIPC regime, then you will easily pay for the treatment.”

As part of CIPC stewardship measures, many older stores have been improved in terms of integrity and airflows and are now in far better shape for utilising the volatile in-store treatments available to replace it.

However, Crop Systems storage expert Ray Andrews – who sees a place for spearmint oil when storing processing varieties – believes there are still many older stores which have a lot of leaks, particularly louvres that may appear well sealed, but aren’t airtight when closed.

These leaks will need to be rectified if costs are to be contained when using spearmint oil, with the vapour having to be held in stores for a minimum of 48 hours, and possibly 72 hours, post-fogging, according to manufacturer guidance.

“We as an industry really need to get to work on louvres, whether it’s for spearmint oil, ethylene or DMN (dimethylnaphalene), which are also volatile.

In keeping stores closed for 48-72 hours, there are some concerns about fry colour being damaged due to carbon dioxide levels building within a store when using volatile CIPC alternatives.

Mr Andrews says this is another area that could be addressed before commencing with spearmint oil programmes, with sensors able to provide ongoing monitoring of the gas within the store and crop. Installing these will be key to avoiding processing issues.

He advises that stores are prepared carefully, with air recirculated for at least 24 hours prior to fogging. This will help keep the crop dry and temperatures uniform, which creates conditions for even distribution of the product.

“You may need to run the fans for 48-72 hours to circulate the fog throughout the store and they should be set at a slower speed to avoid creating excess suction pressure. If the store is leaky, this can force vapour out.

“In well-sealed stores, you could use a higher fan speed, but it is probably unnecessary and a waste of energy,” says Mr Andrews.

He also has some experience using Biox-M in processing crops and agrees there will be different requirements for fan speeds, but much will depend on the type, age, condition and environmental control capability of individual stores.

As a result, he urges new users to consult with storage experts before treating to ensure the product can be adequately managed for maximum efficacy.

There is also a need to test certain types of insulation to ensure the spearmint oil applications won’t cause damage to the store after application, as it acts as a solvent when in liquid form.

Newer stores insulated with composite panels are largely fine. However, some types of spray-on Styrofoam or polystyrene panels installed in older potato stores can be vulnerable, particularly where airflow is poor, and condensation allowed to occur.

Contractors can take a sample of the insulation material and as a “worst case scenario” test submerge it in neat product overnight, where it either shows signs of degradation or comes out unscathed.

“Work at Sutton Bridge has shown that exposure to the vapour – which is obviously more realistic to how it’s used in store – is not as damaging to some insulation as first thought.

“But I still think it’s a good idea to have the worst-case test carried out before application, so you are at least aware of the potential risks,” says Mr Green.

There have also been concerns among growers that processors may reject crops treated with spearmint oil as there is a perceived risk of taste taint in the final product.

Mr Green says more experienced users on the Continent have not encountered such problems so far and he doesn’t foresee any issues in the UK either.

This is echoed by Mr Tapp, who describes many of the taint claims as “spurious” and says they should not prove a barrier to the use of spearmint oil in processing crops this season and beyond.

“It is still a relatively new product and completely different to CIPC, so forget all that has gone before, think carefully about how it is best managed in your store and it should produce satisfactory results.”