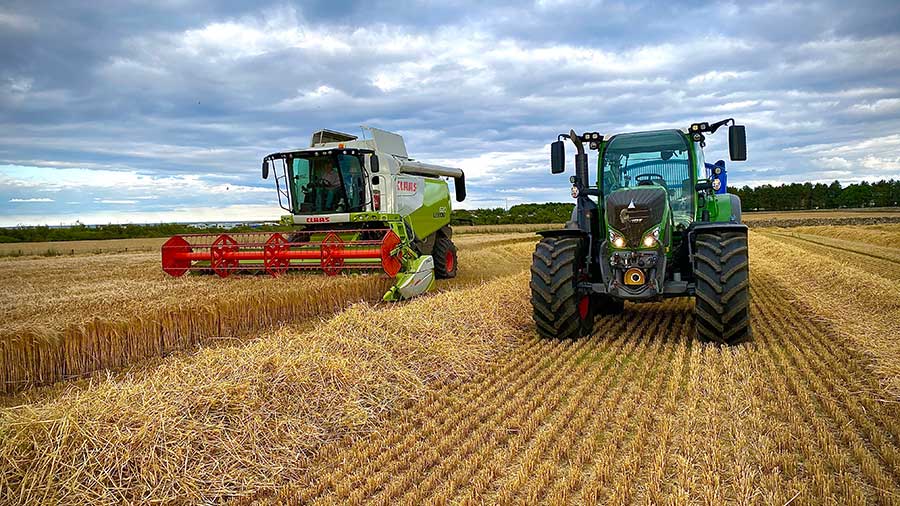 Harvest is making steady progress across much of the country, with yields – as expected – proving something of a mixed bag, after one of the most challenging seasons with a very wet winter followed by spring drought.

See also: All of our harvest 2020 coverage

“We started combining on 6 July and had a couple of rainy days which hampered progression last week,” he said. “We swathed rather than desiccated it, and yields have been average – nothing more.”

“You couldn’t tell the difference between the varieties. It’s been a very challenging growing season so we’ll take what we can get,” added Mr McCormack.

Having baled most of the straw, he is now moving into 100ha of Kinsgbarn winter barley. “We cut two headlands at 15.5-16.5% moisture on Wednesday, but it’s been spotting with rain since then.

Mr McCormack’s Zyatt winter wheat was still some 10 days away from being ready, but a neighbour was already cutting Skyfall – a very early crop.

Moving west to Wiltshire, Edward Parsons had cut 69ha of Craft winter barley at 12.8-13.5% moisture, and was really pleased with the results, considering the conditions it was drilled in.

“Over the combine it yielded 8.5-10t/ha – the same as last year – our chalky loam has been a saving grace,” he said. It had also made the malting grade, at 67kg/hl and 1.45% nitrogen, so had produced a decent gross margin, he added.

Mr Parsons was also pleased with the Campus oilseed rape at Templemans Farm, Redlynch, as he had co-cropped it with buckwheat for the first time, to deter flea beetle.

The buckwheat grows really vigorously over the autumn, but is sown at a low seed rate so as not to smother the oilseed rape. It then dies over the winter so isn’t an issue when it comes to harvest.

“There are a few bare patches here and there, but the rape yielded 3.3t/ha – last year it was nowhere near that,” said Mr Parsons. “At my uncle’s farm it did 3.8t/ha. We worked hard to get it right so we’re really chuffed.”

Down in Cornwall, Charlie Watson-Smyth hadn’t started combining at Tregirls Farm, Padstow – the first time it had been later than 10 July. “We couldn’t drill the winter feed barley until February and the Maris Otter was later than that.”

But an hour further south at Chy-Vellan Farm, Marazion, Matthew Collins had cut 16ha of Cassia winter barley at 16.5% moisture. “We cut it last Sunday (12 July) and it was hardly ready. We had itchy feet and it was too good a day to miss,” he explained.

“It’s all ripened off now so we’ll probably get back on combining this Sunday.” Considering the growing season, it had yielded reasonably well, at 4.9-5.6t/ha and 67-68kg/hl. “But that was 16ha of the better looking stuff – we’ve got 80ha left to do.

“Some of the crops are going to be a bit lighter, but it’s not going to be a disaster. We had to redrill some on the headlands, but we’ve been fairly lucky.”

Up in the midlands, Tom Hipwell had cut 16ha of Campus oilseed rape at Hill Farm, Sandy, Bedfordshire, and was not impressed with the results.

“It’s been very poor – after coping with flea beetle, the wet winter and the dry spring it’s barely made 2.5t/ha,” he said.

“We’ve got a lot left to do and the winter barley will be ready as soon as we’ve finished. But we just need some sunshine – if it’s not drizzling it’s just dull at the moment.”