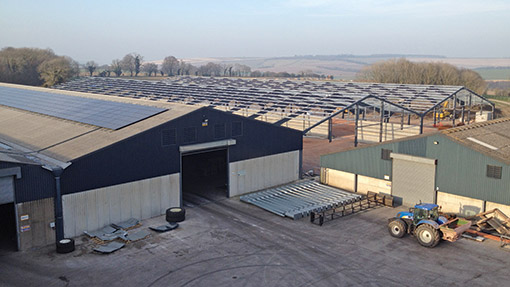 Putting up a new grain store is never going to be a cheap project. But there are ways to slash costs by thousands of pounds through careful tax planning.

Mike Butler, partner at accountant and financial planner Old Mill, recently helped with the expansion of Keysley Store in Wiltshire – and saved the project more than £180,000.

“The idea is that you use a self-invested pension to pay for the land and build costs,” he says. “That provides tax relief against profits of between 20-45%, depending on whether you trade as a company, sole trader or partner.”

Once built, the farming business rents the store back off the pension fund, providing further tax relief against profits on an ongoing basis. “The pension fund does not have to pay tax on the rental income received, so can either use it to repay debt or continue to build the retirement pot.”

In the case of Keysley Store, which provides storage for Frontier, the planning process began in 2012 when owners Colin and Sarah Godwin decided to extend their existing grain store from 27,000t to 40,000t capacity.

“We had already had one experience of using a pension fund for a smaller building, and that proved very successful,” says Mr Godwin. “The second build was altogether more substantial and at first we didn’t think it would be possible to construct such a large building within our pension.

“However, looking at numbers and taking on board the need to mitigate risk, it became clear that it was in certain ways more viable,” he adds. “When we realised we could set the build costs against our ongoing tax liabilities, it was a no-brainer.”

Having previously sold a smaller building into their self-invested pension, the couple had some funding readily available to put towards the build cost. With the land valued at £120,000 and the building cost of £780,000, the total construction cost was £900,000.

They paid for this by making a lump sum pension contribution of £200,000, with the rest a mixture of existing pension funds – which had been invested elsewhere. “Self-invested pensions are also able to borrow up to 50% of their value – either way you look at it, the Godwins would have obtained tax relief on the whole build cost,” says Mr Butler.

See also: Six ways to beef up an arable unit

As Keysley Store is a limited company, the pension takes the form of a self-administered scheme, which benefits from lower administration fees and simpler management than a self-invested personal pension, which is the type used by sole traders and partners.

“Tax relief is obtained by setting contributions against profits – so in the case of corporation tax, relief is claimed at 20%, whereas it could be as high as 45% for higher-rate individual taxpayers,” he adds.

Slashing the cost of a new build by 20-45% is clearly attractive – but prospective investors must ensure they plan carefully to avoid any pitfalls. “Start planning well in advance to allow the financial planning team to register the pension fund, take care of invoicing and pricing, and ensure appropriate VAT is reclaimed in good time,” warns Mr Butler.

“You also need an exit plan in place to release the pension funds when you do come to retirement.” This is usually done by selling the store on the open market, selling back to the farm business, or, ideally, to another pension fund set up by the younger generation.

No capital gains tax will be payable by the pension fund on this transfer, although conveyance costs will include legal and valuation fees. “The pension then becomes like any other pension pot – you can take one-quarter of it as a lump sum, then draw down cash reserves or buy an annuity to see you through retirement.”

In addition to using a pension to erect the structure of the building, farmers can claim capital allowances through the business, giving 100% relief on up to £500,000/annum on fixtures, fittings, plant and machinery, up to December 2015.

“This covers everything from water and electrical systems, to partition walling and grain dryers.” Any expenditure above that threshold can be written down at 18% a year.

“Many farmers have been chasing tax savings by claiming capital allowances on machinery over the past few years,” says Mr Butler. “However, this could be seen as a short-term reaction to changing tax legislation. I believe now is the time to redress the balance and see more efficient methods of tax saving come to the fore.”