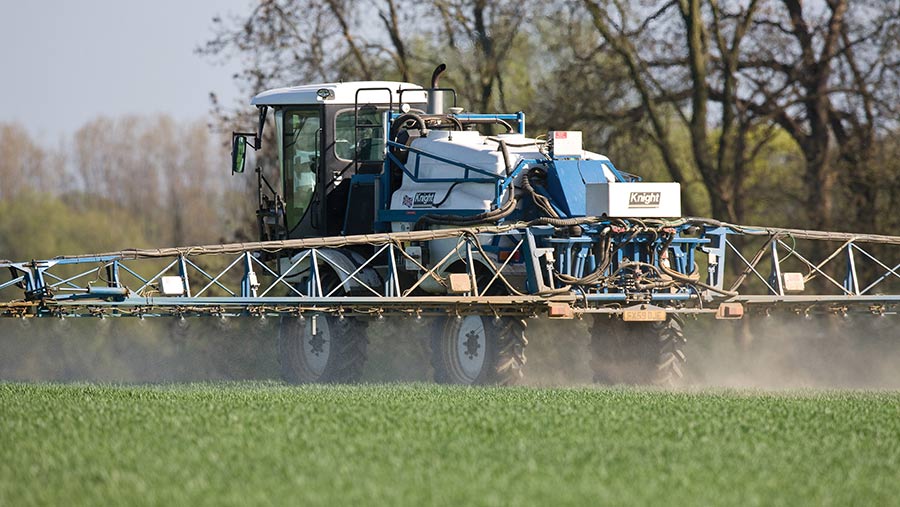 Mild autumn weather is bringing an increase risk of aphid-spread BYDV, so agronomists are weighing up the benefits of putting the sprayer out into wet cereals fields with an insecticide.

Slug activity is also being seen in many fields in the current mild weather, but some fields have been too wet to treat with pellets.

Phoma disease is become more prevalent in oilseed rape crops with some agronomists hoping to delayed fungicide treatments long enough to include a grassweed herbicide.

It would have been too much to ask that the initial weather forecasts for a dry settled first two weeks of November were accurate so that we could complete herbicide applications to late-drilled cereals. However, we managed a couple of spray days last week, but it is increasingly doubtful that we will be able to complete these with the current weather patterns and worsening ground conditions.

The mild weather has meant aphid control and barley yellow dwarf virus (BYDV) risk has been a topic of discussion with clients. Insecticides are the one group of chemicals that I am most reluctant in recommending due to the potential effect on beneficial insects.

It is all too easy to include a pyrethroid, which may or may not be necessary. I would rather have a discussion with the grower about the calculated risk with the accumulated daily air temperatures above 3C reaching a T-sum of 170 stretching into December and declining numbers of aphids. Hence all of my later-drilled cereals won’t be getting an insecticide.

Early grassweed control in winter barley crops is crucial, due to the lack of effective contact herbicides, and early signs are promising. I have tried some Octavian Met (flufenacet + diflufenican + metribuzin) to help with control of groundsel, which was the broad-leaved weed control problem of the year last season. Control looks impressive so far.

The unsettled October weather dictated that a few pre-emergence herbicide plans for winter oats had to be switched away from flufenacet + diflufenican to just straight diflufenican post-emergence, so we may have to rely on the crop being competitive against the grassweeds.

Oilseed crops have been the revelation of the season despite all our fears. Some crops are very strong so autumn canopy management is a nice problem to have to worry about.

Disease levels have been pretty low up until recently, but phoma levels have increased significantly, with some early signs of light leaf spot. So disease control will be included with propyzamide herbicide applications based on prothioconazole, but including tebuconazole where we need to put the brakes on growth.

Soil temperatures are at or close to being acceptable in our region so with the fear of not being able to get another opportunity some has already been applied.

The opportunities for field work at this time of year become very limited, so to my mind the benefit of early-drilled autumn crops is without doubt. We have varieties that can deal with early sowing, and for the most part, a decent choice of disease resistance that can counter mildew.

The only downside is the risk of BYDV. I do recommend an aphicide for August-sown crops, and will keep it in mind through September, but usually after mid-September there is either wind, rain or cold sufficient to deter aphid activity. An aphicide is a very small price to pay for early drilling.

There may be the odd spot of mildew but nothing that requires treatment, and I would far rather have that to ponder, than to be wondering if I might get the planned wheat fields sown/rolled/sprayed.

Of course, the delay is often part of the plan and we can still get wheat sown after potatoes or beans if the weather is kind. I am happy to have seen wheat sown into some fantastic seed-beds this week. Whether they get an autumn herbicide is another matter, but this is not so much of an issue after ploughing, as there will be less of a challenge from grassweeds.

It is more of a problem when wheat is puddled into cold, wet, cloddy seed-beds – not the case so far this season. My rough rule of thumb is that a half crop of wheat is worth keeping; less than that and it might be worthwhile to scrap it and sow spring barley (or wheat) instead.

The grower has to consider the potential gross margin and also the cost of establishment of the replacement crop, plus the potential impact of residual products on that replacement. Given the ability of wheat to compensate for low plant numbers, it is very unusual in this part of the country to see an established, but poor, field of wheat being re-sown.

There are some sprays still to go on – propyzamide onto oilseed rape; and herbicides onto the later wheats, largely to target annual meadow grass and bromes, but slugs are not much in evidence and generally things are looking well going into the winter.

Cereals drilled early on both the Downs and Weald are now looking well. While we have not had the extreme weather of last autumn, for most areas there has been continuous rain throughout much of October and only some small windows of good weather in November.

This has caused further delays with any remaining drilling and has postponed many herbicide applications possibly now until the spring. In some situations, experience of later drilling last season has given some the confidence to wait for dry weather over the winter months and plant then.

Last season taught us to wait until spring and sow a plan B crop instead sowing in borderline conditions. Should a weather window allow us to drill winter wheat late, then from now on drilling rates will be no less than 425 to 450 seeds/sq m.

Not only has the wet and windy weather meant limited progress with any remaining drilling and field work, it has meant that aphid flights and activity have been minimal but not non-existent. Some crops that emerged in September that may still require treatment have been or will be treated by mid-November to avoid potential multiple applications.

Damage from frit fly in winter wheat crops continues to be a challenge. The classic “deadheart” symptoms seen when frit fly attack, causing a yellow central leaf that can be pulled away from the surrounding green leaves, are more common this autumn. Where the issue is severe enough in emerged winter cereals, then rolling the crop to promote tillering and recovery may help.

Unless volunteer beans are significantly competing with the cash crop it is questionable whether it is worth controlling them now. Low populations will be killed off or knocked back by the wet and cold weather over the winter months and any remaining volunteers will be controlled by spring herbicides.

Oilseed rape crops continue to progress well, particularly where they have been sown with a range of companion species. Many crops now have phoma at threshold level, while some remain completely clean of the disease.

An autumn fungicide will be considered for light leaf spot protection and phoma control where deemed necessary, timed with any planned propyzamide applications. Note, soil temperatures are important and still haven’t dropped sufficiently. Timing is likely to be a compromise between soil conditions and finding a weather window dictating the decision of when to spray more than anything.

Today’s comments may seem a little gloomy but it’s not all that bad. There are some well-established crops that have received their planned inputs and are growing well.

During the first week of November more wheat has been sown by a variety of methods, mostly with tine and combination drills and some broadcast and cultivated in. My estimate is that most growers in Suffolk now have somewhere between 85% and 100% of the planned winter wheat area sown.

As opportunities arise winter wheat can still be successful; the latest safe drilling date for most varieties is the end of January or mid-February. As time moves on, compare realistic gross margins of a lower-yielding winter wheat crop with spring drilling options.

Rain since sowing has left fields wet and vulnerable, with many areas too wet to spray. For some fields where seed is not well covered or where there is the likelihood of seeds bathing in a “herbicide soup”, we have deliberately left until peri-emergence.

But the silver lining (yes, I’ve found one!) is that the later-planted fields flushed heavy with blackgrass have been controlled with glyphosate before drilling. We wait to see how much more emerges. 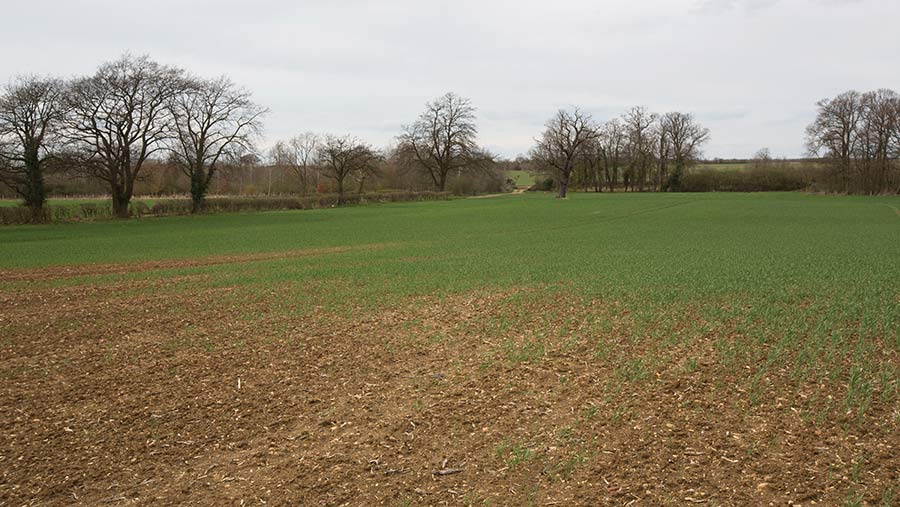 Slug activity in some fields is very high and will continue while conditions are mild. In some situations, it’s easy to find copious slug eggs and hollowed seeds. Some fields have been too wet to treat with pellets and others have been pelleted, but damage is occurring underground as slugs are not taking the surface bait. Well-manufactured ferric phosphate-based pellets are the most appropriate treatment.

For rapeseed, soil temperatures are now cool enough (10C and falling at 30cm depth) to allow grassweed control with propyzamide (Kerb). Propyzamide + aminopyralid (Astrokerb) also gives good control of broad-leaved weeds, particularly the tricky ones like sow thistles and cleavers. Where weeds are too big or a wider spectrum of control is needed consider applying Belkar (halauxifen-methyl + picloram).

Unless volunteer beans are significantly competing with the cash crop, it is questionable whether it is worth controlling them now.