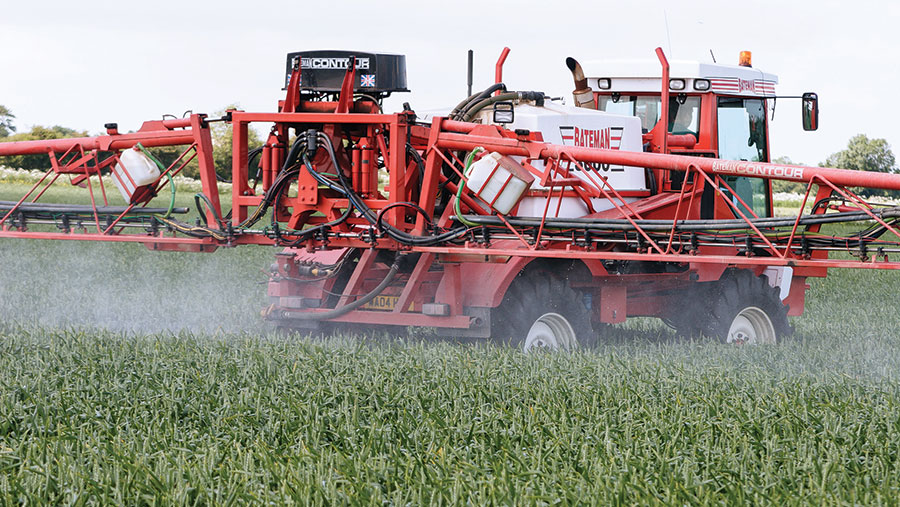 The yellow rust threat continues in wheat crops, and some growers will be using the upcoming T3 ear spray to top up protection against the disease.

It may also be worth adding foliar nitrogen for certain milling wheat crops, as some of the nitrogen fertiliser that had been applied was not taken up.

The dry conditions have fortunately kept orange blossom wheat midge at bay, although it is creating a headache figuring out how to tackle weeds in stressed maize crops without causing too much crop effect.

Since my last article, there has been very little rain. Some were lucky to get a localised thunderstorm on 9 May, but since then it has been dry, dry, dry.

However, with the rain in April, we have been luckier than many. You don’t have to go too far south or north to find areas that have had no appreciable rain since the beginning of April. There are reports of spring cereals only germinating in patches and some winter wheat being irrigated on light land to try to save it.

Spring cereals that got away well with the mid-April rain – and therefore had their T1s in early May with a low dose of plant growth regulator – are now starting to suffer from the dry.

Weed control has worked pretty well, but I tended to use more hormone herbicides in combination with a sulfonylurea to mitigate against the dry weather slowing the effectiveness of the latter.

These crops, especially barley, have the flag leaf emerging, but are hardly above welly height. It is noticeable that the no-till crops have been less affected and are withstanding the dry better.

Spring wheat yellow rust that was a concern early on doesn’t seem to have erupted like it has in winter crops. Therefore, T1s have generally kept it under control.

Weeds in beans
Spring bean crops established really well, but are being affected by the dry weather. Pre-emergence efficacy has been pretty variable due to limited moisture.

Graminicides have been applied with phosphite to keep the crop healthy to help resist early disease. But they are at this stage looking more like dwarf beans than chest-high field beans, which is starting to alarm combine drivers, with the fear of having to cut beans at ground level.

Maize crops were the focus for crop walking last week to assess for post-emergence herbicide requirements. These decisions are being complicated by how drought-stressed crops are looking, and with hot weather, herbicide applications are going to be challenging to minimise crop effects.

We are fortunate to have some reasonable winter wheat crops, but, like others, we also have some pretty poor January/February-drilled crops. Both the good and the poor have been troubled by yellow rust more than septoria up to now, which is not the normal for us in the West.

T2s were very much making sure yellow rust was covered, but recent crop visits are finding yellow rust, so T3s will probably be applied not for ear disease complex, but to top up rust protection. Some of the February-drilled wheat is still to get its flag leaf spray.

But another common factor is that whenever they were drilled, they are starting to show signs of leaf rolling and, on the later-drilled crops, tiller and lower leaf yellowing.

As a sun-worshipper, I am personally delighted with the weather, but acknowledge that it is far from ideal for crop production. A few nights of gentle rain would be a great help for plants.

The extraordinary growing season continues. Crops that sat doing nothing through April inevitably put on growth spurts and raced through the stages in May. The variation in crop advancement is reducing, as it always does, but the difference in yield potential is very striking.

Oilseed rape crops have finished flowering and pods are developing, but there was a lot of late pigeon damage and some endrigs are particularly scruffy. Winter barleys are generally satisfactory in terms of ground cover and are absolutely free of disease.

Of the winter wheats, the early-sown ones have looked the best right through, but now I would say the moisture retention of the soil is more influential, and crops on lighter land are struggling. There are some with very thin areas, and having started life with wet feet and poor root development, they are not coping well with the severe lack of moisture. Winter oats might be the pick of the bunch.

Variable spring crops
The spring crops are equally variable, especially barley. Some are thick, well-tillered, clean and healthy, while others are thin, barely tillered and stressed. All the spring crops that were sown into cloddy soils are extremely patchy and I can still find unchitted seed in some of the bare patches.

Some establishment methods need to be reconsidered for next season. Although the weather played a part, some combinations of kit have really not worked too well in the circumstances and, whatever else, we need to be able to make a decent job in a wide range of conditions.

On the plus side, the disease levels are low to non-existent as I write. For us, the gap between wheat T3 and harvest is generally longer than in the South, so it would be brave to do nothing. My T2 strategy was very simple and at somewhat lower rates than normal, and T3 will be a low-cost protectant.

Brown rust is a rare phenomenon north of the border, but is about the only thing that thrives in this weather. Aphids and other flying insects will also be enjoying the sun, so vigilance is needed on that score.

It never rains but it pours – metaphorically, that is. The continued dry weather after one of the wettest winters is now taking its toll on a large proportion of crops.

Some spring crops vary wildly in terms of growth stages across the field, ranging from only just at growth stage 23 to GS39.

Winter wheat crops on the Downs have ears emerging, and in most other parts of the county – except for January- and February-sown crops – there is a similar situation, with the most forward crops now fully flowering.

Along with spring wheat, the later-sown crops have caught up considerably and will be receiving a T2 in the next seven days.

T3 fungicides are being discussed and planned for forward crops. Rust is the main target, so after a well-timed and robust T2, a higher rate of prothioconazole/tebuconazole will be used, if necessary.

However, if the weather remains dry through to the end of flowering, the fusarium risk will be lower and final fungicides may be delayed until after flowering, particularly if crops remain drought-stressed.

Monitoring of orange wheat blossom midge, particularly in known hotspots, is now in progress, with some midges already seen.

Winter barley crops generally look very good and the gates are now shut, with a few crops beginning to turn in colour.

Oat disease
Ears are now emerging in winter oat crops and they are generally clean of mildew and crown rust to date. Crops have received one fungicide application of tebuconazole plus pyraclostrobin. The plan will be to apply a top-up for crown rust protection from ears fully emerged.

The poorer oilseed rape crops – of which there are plenty – that have survived and continue to flower may now at least be worth running the combine through. Some crops have decent pod set, if somewhat uneven, and are likely to require a pod sealant to aid an even harvest.

Winter beans – or should I say winter varieties sown in the spring – have generally received their first fungicide in order to use up products containing chlorothalonil.

Bean plants appear to be going through their growth stages more slowly, but generally these crops continue to look well. A combination of azoxystrobin and tebuconazole will be considered for a follow-up fungicide application.

Bruchid beetle is not generally a concern for growers of these bean crops at the moment, as most are not destined for human consumption. Care and consideration should be taken before embarking on treatment at the level of application required to control the pest, with no guarantee of success.

To finish on a high point, as I write this article, there is at last rain in the forecast. I hope that doesn’t tempt fate.

The input that all crops urgently need is rain. In this cruel growing season, crop potential continues to slip as warm, sunny weather persists.

Winter wheat ears have emerged and are flowering. For most winter wheats, the risk period for orange blossom midge has passed, and it is a relief that most crops are now flowering and beyond the susceptible stage.

Continue to monitor susceptible varieties of late-drilled and spring wheats until they are also flowering.

In wheat, yellow rust risk remains high in some crops. This disease has been particularly difficult to control this season, despite early intervention (T0 or earlier) and robust, tailored programmes. As temperatures remain warm and dry, protection from brown rust on susceptible varieties should also be a focus.

T3 sprays
It will be worthwhile to apply T3s where either of these diseases are a risk (this includes many varieties).

Septoria levels are very low, and dry weather during flowering will reduce the risk of fusarium infection.

Ear sprays based on tebuconazole will be relatively low-cost and appropriate for many situations. Additional actives may be required on higher-value milling wheats and where yellow rust persists.

During grain fill, we hope for moderate temperatures, as well as rain to maximise yield potential.

For milling wheats, despite lower yield potential, consider the need for a top-up of foliar nitrogen to achieve quality specifications. This can be applied until milky ripe. Earlier solid nitrogen may not have been fully available to the crop. 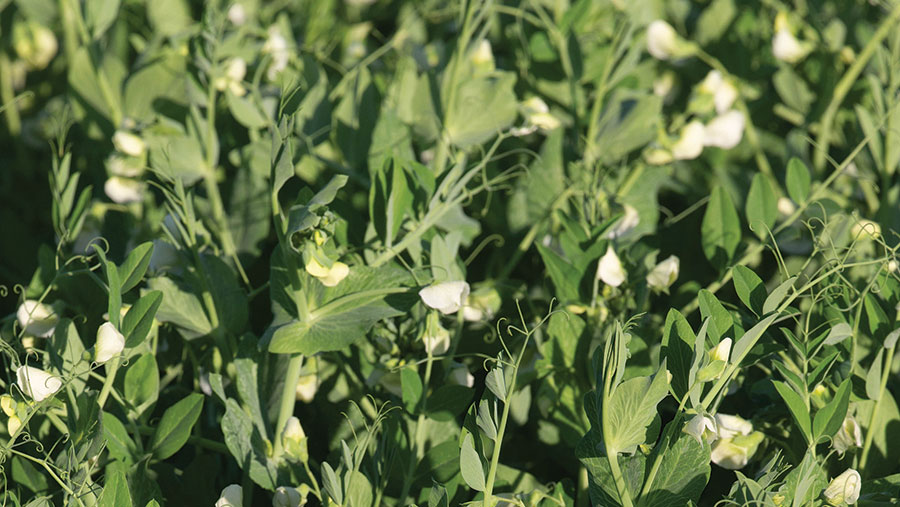 On peas, aphid pressure is high. For all insecticides, check product labels for timing of application, maximum number of treatments and total permitted dose per crop.