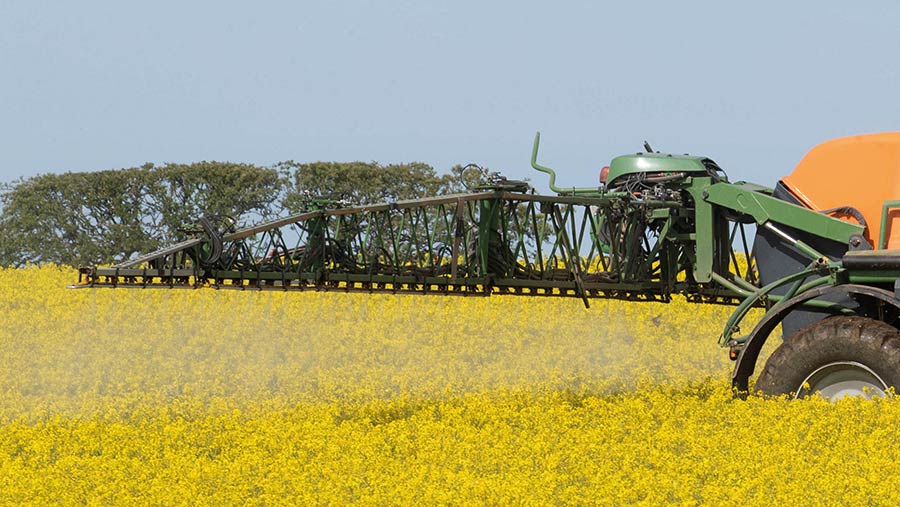 The rain has saved crops, although it is too late for some crops where the damage has already been inflicted. For example, winter cereals in the north have lost tillers and look thin.

While most crops have benefited, rain has also resulted in the expected flush of weeds which will need dealing with. There is some debate on how the April frosts may have affect oilseed rape yields.

The transformation from cold dry April to cool wet May is ample proof that we live in a maritime northern hemisphere country which has weather rather than a climate. It’s what keeps my job challenging and interesting.

It looks like being a season when the strongest inputs of fungicides will be needed on wheat flag leaves. While leaf three sprays were protectant, leaf one sprays will need good eradicant properties.

Varieties with strong septoria resistance (above a rating of 7) come into their own in a year like this as it allows them to be sprayed last in a month when conditions look decidedly catchy.

I see disease resistance as having two major benefits: maximum economy in a low-pressure year and maximum flexibility in a higher-pressure situation.

Growth regulator strategy has been rethought since the rain and the lushest crops will receive ethephon-based materials with the flag leaf spray.

The rain has brought on a flush of polygnums, particularly fat hen, on heavier soil where crops are thin and light can penetrate. Bare areas have suddenly become very green, and it’s not wheat.

Thankfully, we have some Arylex (halauxifen) or MCPA-based products which can be applied at this timing. MCPA is the cheaper option, but Arylex is appropriate where cleavers are present.

Plant dissection to assess leaf emergence was made more worrying by the potential for frost damage to the developing ear.

I was particularly concerned about the earlier winter barleys, having seen total ear loss in the variety Torrent back in the early 1990s. Fortunately, no discoloured developing ears have been seen.

Winter oilseed rape on higher ground has been affected and lost pod sites.

Winter linseed on our lower-lying sites is now starting to flower and looks well. However, the combine will be a better judge of performance than my eye.

Winter oats have finally decided to green up. Even though plants have been prostrate and pale, nodal growth stage has been moving on.

Spring crop drilling is largely complete except for maize after grass leys. I suspect the rain will more than compensate for the loss of moisture from the grass ley.

Well, we’ve finally had some rain in Cumbria over the past fortnight, but the damage is already done in some crops.

Certain winter wheats and barleys (especially those late sown last autumn) are especially thin after dropping tillers during an exceptionally dry April and early May.

T2s have been applied over the past week on winter wheat crops and although it is tempting on poorer crops to stop applying inputs after the drought conditions over the past two months, it is important to note that T2 is the most important fungicide on wheat as the top two leaves contribute 65% to total yield.

Cereals aren’t the only thing that’s taken a hit from the dry conditions. Grassland on light soils has struggled over the past month.

Many have taken first cut over the past two weeks in Cumbria and although in some situations there has been a lack of bulk, waiting is not always an option as it is crucial to take the grass before heading, when aiming for high quality and digestibility in the silage.

Maize is now nicely around the four- to five-leaf stage and has pushed up through the plastic where grown under film.

The dry conditions have meant pre-emergence herbicide efficacy has been poor, so post-emergence sprays will be necessary in some crops as maize is very uncompetitive in the early stages.

It is advisable to go earlier rather than later with the post-emergence spray, as smaller weeds can be controlled with a lower rate of herbicide, reducing the stress on the crop.

Spring cereals have been slow to emerge, but the recent rain has given them a boost and they are now moving very quickly through the growth stages.

Weed emergence has been slow and every field is at a different stage, so field-by-field monitoring and timing of inputs (especially herbicides) is crucial this spring.

Unlike last year, when it arrived too late for many earlier-developing crops, this May’s rain has been just in time. And, while the exceptionally cold April has put crops under a lot of stress, it has also held back their development, helping to reduce the impact of another dry spring.

With our winter OSR only now getting its mid-flowering spray, it certainly doesn’t look like being an extended flowering. Still, we’ve been really pleased to see so much flower on well-structured crops with some of the best side-branching ever.

In fact, the side branches are now well ahead of the main raceme, which has taken a real hammering from the late frosts. The amount of pod abortion would be alarming if we hadn’t had the experience of “Cabernet syndrome” back in 2010.

The sheer amount of compensation that Cabernet crops with a good canopy architecture gave, when many all but lost their main raceme that season, led them to produce some good yields.

We’re really chuffed we stuck to our guns and didn’t push up seed rates or do without the Toprex (difenoconazole + paclobutrazol) at green bud.

The potential in our crops – not to mention harvest prices north of £450/t – are a just reward for those who’ve stuck with oilseed rape. It hasn’t been easy. But even at 4t/ha, margins look like they’ll be rivalling first wheats once again in a very welcome confidence boost.

Not that our wheat prospects are looking bad, I have to say. Flag leaf emergence has been delayed by the cold spring, but crops are moving well now that they’ve got some moisture and warmth. The weather and our decision to keep up a decent early fungicide programme has left us going into T2 in a very good place.

What’s more, we have the certainty that disease development will be picking up and that grain prices will warrant the spend. So, we’re confident in basing our T2s around the “big new triazole plus SDHI guns” of Lenvyor Duo (mefentrifluconazole in a twin pack with fluxapyroxad).

Where rusts are more of a concern, we’ll rein back on rates here and add Ceratavo (benzovindiflupyr) or pyraclostrobin.

Two weeks ago the idea of a wheat plant growth regulator at T2 would have seemed like madness. But, with plenty of nitrogen sitting in the ground ready to support rapid crop growth, a low rate of ethephon or good old Terpal (ethephon + mepiquat) may well be on the cards for some.

Our spring barleys have a lot of catching up to do and will need some timely growth regulation too. After the stress they’ve been under and some fairly heavy fungicide and herbicide mixes in the offing, we don’t want to hit them too hard at T1.

So, we’re planning to go on with our PGR at a separate T1.5 spray along with folpet for ramularia protection. This, in turn, will allow us to delay our T2 until the awns are fully out for the best response.

A wet and windy May fills the barn with corn and hay. Let’s hope so.

Recent rains have broken the continued period of dry we have been experiencing here in Norfolk and Suffolk. Many, including myself, feared a repeat of last spring with the rain appearing too little, too late.

As luck would have it, my fears were unfounded. The spring has now been transformed and there is a renewed hope for better yields in the air. 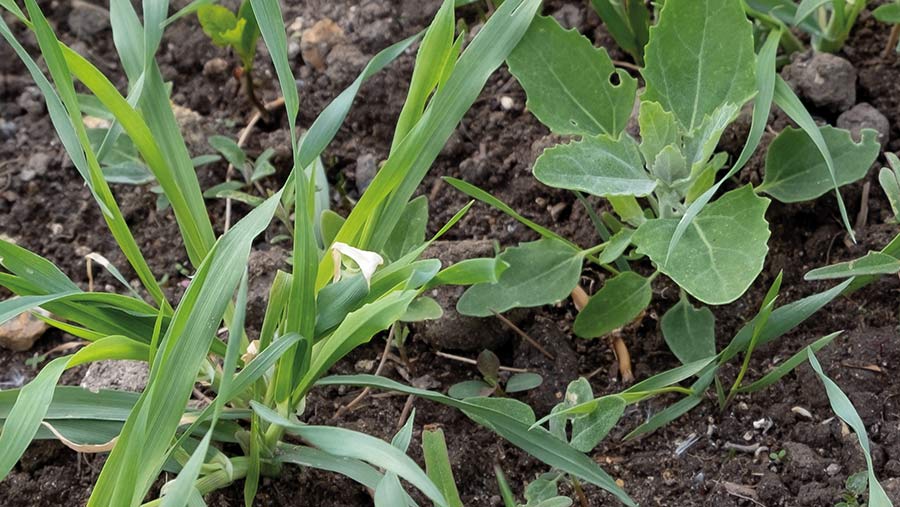 Crops have received the rain warmly and are noticeably looking more vibrant and vigorous. Indeed, my winter barley crops seem to be growing overnight and awns have been emerging at a rapid rate.

Currently we are in the midst of applying barley T2. With the loss of chlorothalonil, ramularia will be more difficult to control and will require more consideration.

Tricky establishment on spring-cropped, heavier land is turning into a distant memory as dormant dry seeds find the moisture and appear above the soil line.

Spring cereals will now need monitoring for the requirement of a herbicide application, as the rain will have encouraged a flush of weeds. Keep an eye out for any nutrient deficiencies as it is better to correct these before they affect yields.

Winter wheat crops are now heading towards flag leaf, with some early sown crops already there. Disease levels have been low up until now.

However, the recent wet and warming weather will have increased both septoria and rust pressure. T2 fungicides are best applied preventatively, but do not rush in early. Chemistry cannot move down the leaf, so it is important to cover as much of the flag as possible.

Wheat T2 will still be planned with crop potential in mind, but rates will be more robust than thought a few weeks ago. Newer chemistry from BASF is likely to feature within my programmes.

The addition of a strobilurin will be added to rust-susceptible varieties. This will not only provide good rust protection, but will bring the added benefit of greening.

With crop prices as good as they are, anything that has a significant return on investment is surely a worthwhile addition to the tank.