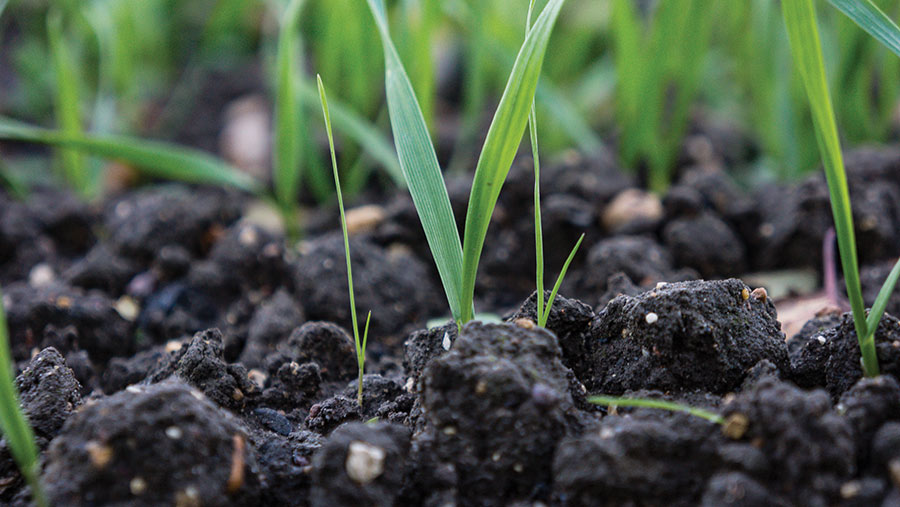 There are worrying amounts of blackgrass emerging through the crops that have already been drilled, which will test pre-emergence herbicide stacks this autumn and may lead to some growers wishing they had delayed drilling for a bit longer.

On the positive side, the autumn conditions have been ideal for the oilseed rape crops and there are some big canopies, which means care will be needed to not get caught out by cut-off timings for herbicides such as clethodim.

See also: Is there still a need for costly wheat seed treatments?

They were drilling into all soil types and into all situations before the chaff from the back of the combine had even hit the floor – some blackgrass land included – to avoid a repeat.

I couldn’t do to lose much hair, but thanks to constant, vigorous forehead rubbing since harvest, it now takes me longer to wash my face every morning.

Blackgrass, barley yellow dwarf virus, spring barley, oat and wheat volunteers (both as contaminants and as a green bridge) all forgotten as being major issues – but, unfortunately, all with the potential to bugger up both yield and quality of the 2021 harvest, which has to be a good one.

The importance of a timely pre-emergence stack will prove vital, but despite their helpful activity on blackgrass, flufenacet, pendimethalin, diflufenican, prosulfocarb, aclonifen, tri-allate etc don’t come close to the levels of control we achieve with glyphosate before the crop goes in.

Perhaps the resulting flushes following this current frustratingly wet spell will illustrate why delaying the drill wasn’t such a bad suggestion after all.

One thing is certain with these warm wet soils, that pre-emergence stack needs to be robust and applied within 72 hours of drilling to stand any chance of performing, never mind impressing.

Seed carried over from last autumn’s non-drilling season is testing anywhere from 0 to 99% germination, so always get old, stored seed tested before you drill it.

Less OSR
Oilseed rape areas are down by more than 50% on 2019 plantings, not surprising considering how many growers suffered total crop loss from cabbage stem flea beetle.

I am, however, as many other consultants I suspect, staggered at just how much OSR has been planted this autumn, as well as how small a part flea beetle has so far played on crops, which stand proud, majestic and so far largely untroubled by anything.

With many of the forward pieces already over eight leaves, cut-off timings for herbicides such as clethodim will need monitoring.

Six inches of rain in five days certainly quashed any hope of drilling wheat on heavy land before the main flush of blackgrass seedlings.

We can only hope that the weather is now kind and allows us time to apply a sensible dose of glyphosate (not lower than 540g/ha) before the crop goes in.

On any crops that were established just before the deluge, walking the fields has been trying, with wellies left behind in the mire on more than one occasion.

Fortunately, on those fields sown in the third week of September, where blackgrass is not a serious issue, establishment is excellent.

Here, the main job is counting the day degrees before an insecticide is applied for barley yellow dwarf virus.

Virus control
Please remember that not only the correct day degree figure is needed, but also conditions suitable for aphid flight.

I always use the various apps, models and field observations in conjunction to produce a reasoned answer.

Remember that the materials we use are insecticides, they are manufactured to kill insects, not just aphids. Use them correctly and with respect. Tolerant varieties are helping, but their deployment is far from ubiquitous.

Oilseed rape (what little has been sown in my area) has had a wonderful autumn.

Drilling early into good seed-beds in cooler conditions with adequate moisture has led to large canopies.

We await late winter and spring with trepidation to see if reduced adult damage does lead to lower larval infection.

This autumn’s conditions leading to healthy OSR plants demonstrates admirably the fact that flea beetles are bullies, having the worst effects on stressed plants, such as we saw in the previous two autumns.

It says a lot for the resourcefulness of nature that two problems – blackgrass and aphids – which I have been battling since the early 1980s are as big a problem now as they were then.

We have certainly been glad to move on from the 2020 harvest. While extremely variable, it wasn’t actually as bad as we feared in many cases. Our November/December wheat drillings, in particular, were a pleasant surprise.

A combination of better prices and lower inputs meant average yields of 7.5-8t/ha generated the sort of margins we generally see from 10t/ha earlier-sown crops.

Even though we couldn’t get on with any peri-emergences, they haven’t set back our grassweed management efforts either.

Continuing to drill wheat also proved the right thing to do with the serious sprouting problems suffered by large areas of spring barley with little or no dormancy in another wet August.

This gives us considerable heart as we continue to hold off on wheat drilling on high grassweed-risk fields.

All our winter barley and, by picking-off lower-risk fields, a fair chunk of our wheat is already drilled into some decent seed-beds, thanks to twice as much August rain as 2019 and a warm, dry September.

Despite employing robust flufenacet-based pre-emergences with Backrow to hold them in place, there’s a worrying amount of blackgrass coming through with the crops – no doubt brought on by the good 100-125mm of rain we received in and around Storm Alex.

With dry soils and September temperatures of more than 25C so clearly comprising pre-emergence performance, we are needing to be especially robust with our peri-emergences and early post-emergences. This means extra flufenacet and diflufenican, with the addition of pendimethalin in places.

Where necessary, we’ll be pepping-up the contact action, too. For which iodosulfuron/mesosulfuron still have their place, as does clodinafop.

Aphicide
Any cereals emerged by the start of this month will be getting their first aphicide in the coming week and looks like needing a minimum of two barley yellow dwarf virus (BYDV) sprays.

Our later wheat drillings – which will be going in as soon as conditions permit now we’ve had such a strong blackgrass flush – should profit from better residual herbicide activity in wetter and cooler conditions, and won’t need so much BYDV protection either.

The absence of Deter means we’ll have to be even more vigilant and careful than usual with our slug pelleting, though.

The unsettled August really helped our OSR, the vast majority of which looks very well at 4-6 leaves despite not being sown early. Good levels of soil moisture enabled it to get away from a relatively late flea beetle migration.

A dry September did cause us some concern. But better conditions overall, and the fact that those sticking with the crop are the most committed growers, have made all the difference.

As well as employing long stubbles, companion cropping, fast-developing hybrids and seed-bed fertilisation, not forgetting the essentials of good autumn OSR management in the face of flea beetle, has been crucial here.

Speaking of which, our key priority now is getting the clethodim on to hold back blackgrass so we aren’t forced to use propyzamide too early, while leaving enough space for any phoma or even metconazole sprays.

What a relief to finally see the back of the 2019-20 cropping year, which was difficult from start to finish, with yields in Cumbria this harvest certainly reflected the testing season.

Although we were unable to host our annual open day at our Cumbrian trial site, the results gained have still been useful and we had some particularly interesting findings from our wheat seed rate trials.

The 2019-20 season showed a much more pronounced effect of seed rates upon yield compared with the previous season, undoubtably owed to wet weather hindering crop establishment and a dry spring reducing tiller numbers.

More interesting perhaps was that we looked at ways to tailor inputs to spring plant populations, to influence final yield.

Additionally, we found that triple super phosphate (TSP) applied in February to low seed rates, aimed at promoting rooting and tillering, was beneficial to increasing yield in this scenario by 1.7t/ha.

Drilling of autumn cereals is about 80-90% completed in Cumbria, with most growers keen to drill early after the difficulties last season, and the drilling left to complete is mostly wheat to be planted after maize crops.

Maize harvest
Maize harvest is well under way in Cumbria. Most maize drilled under plastic has now been harvested, however, fields drilled in the open are lagging behind, in terms of maturity and crop biomass.

Generally, winter cereals have emerged nicely and are looking good, and unlike last year we have been able to apply autumn residuals, which are key for targeting annual meadow grass and bromes, which are the most common grassweed issues in our region.

I am pleased that our local trial site has been drilled for the fourth year running.

This year, along with the usual variety and seed-rate trials, we have some interesting work with seed treatments and even a blend of wheat varieties.