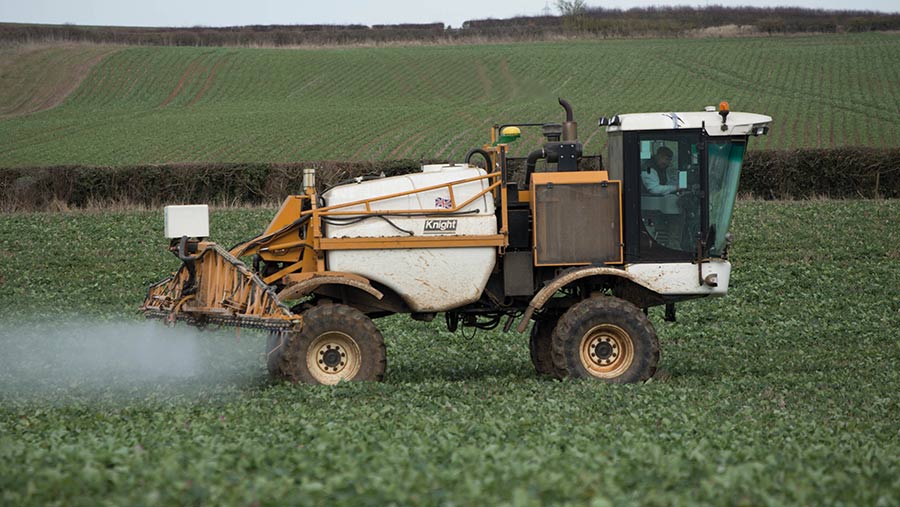 The warmer spell is seeing fields dry out and agronomists are assessing the impact of yet another wet winter on crops.

Disease is being found in some crops and plans are being made to tackle weeds as plants start to actively grow.

However, the large temperature range increases the risk of herbicide damage on newer, softer growth.

See also: Why yellow rust ratings changed for some varieties in 2021

In oilseed rape, light leaf spot is being seen and fungicides are being planned where threshold levels are being reached.

The snow and rain have departed and we have had a good drying wind for a few days, so much so that many fields could be crossed without making a mess.

I am always very wary of encouraging my growers to get out with nitrogen if the ground is soft – if you create big ruts now, you have to live with them all season.

That said, most oilseed rape crops could do with some fertiliser now, and I am recommending 40-50% of the nitrogen with as much of the planned sulphur as possible for the first dressing.

The most forward crops will move quickly once they get fertiliser, and so the first timing needs to allow for a few weeks before rushing out again with the second dose.

Many crops have been hammered by pigeons and have lost a lot of green leaf. However, the buds are visible and the focus now is on protecting the crop from further grazing damage.

Winter cereals look well, on the whole. There are some late-sown wheats that have not developed very swiftly, and these can be targeted for a small early top-dressing.

Most of these, of course, are crops that got the worst wetness, so patience may be necessary.

There is remarkably little disease present so far in winter cereals, although we have seen some snowrot in winter barley.

I have been gathering data from harvest 2020 for the last of our Farmbench group meetings.

I wondered if this would feel like opening old wounds, but the results are not as bad as might have been expected.

Some of my growers have their own stock and source of organic manure, and many others bring in green compost each year to boost organic matter.

Most are chopping their wheat straw, and while this is a great source of organic material, it does require nitrogen to assist in the breakdown process.

A soil analysis to measure organic matter is a good starting point.

Springtime is here. As the weather improves and the land begins to dry, crop growth is picking up pace and growers have begun to chip away at the heavy spring workload.

Hindsight may show this to be crucial if it turns dry later.

When crops begin to grow, manganese should be applied promptly before deficiency symptoms become obvious.

The remaining broad-leaved weed species I am seeing behind these applications are umbelliferae species, groundsel and cleavers, which can be tidied up in due course.

Where autumn residuals could not be applied due to wet conditions or further grassweed control is needed, spring graminicides can now be applied as crops are actively growing.

Some products can be a little harsh on newer, softer growth. Take care applying these when frosts or large diurnal fluctuations in temperatures are forecast.

Both of these can weaken the leaf cuticle, increasing the risk of damage.

The wheat variety profile on farms has shifted towards cleaner varieties for septoria, with the more susceptible being drilled later.

However, many varieties have a weakness to rust or are on the AHDB rust “watch list”, which alerts us to varieties that may be more susceptible to these diseases than their rating suggests.

Active yellow rust can be found on some susceptible plants. In most cases, treatment can wait until a prompt T0 (about three weeks prior to T1, mid-March).

However, monitor these crops; on some later sowings, intervention before this stage may be required.

Oilseed rape crops are a mixed bag. The full impact of cabbage stem flea beetle is starting to show, and the extent of damage depends on location.

In some areas, early-August-drilled crops that looked good are now suffering with active larvae damaging the growing point, and this damage has been exacerbated by frosty conditions.

In other areas, crops with less damage look well and are moving towards green bud.

Growers will need to assess crop potential and match the level of spring inputs accordingly.

A week of dry days has seen soils beginning to dry; however, it was only over the past few days that we could travel over the Weald clays for fertiliser applications. That is, without making a mess.

It always seems pointless to force fieldwork and to then spend money undoing all the soil damage later in the year.

This year, more fields have not been drilled with tramlines to ensure the whole field has something growing on it to prevent erosion, as well as the psychological effect of making us question every pass through the crop.

With Basic Payments disappearing, the challenge is to shave £200/ha off the fixed and variable costs to offset this. Winter cereals are starting to move and generally look well.

This winter has seen far more soil erosion than for many years across all establishment systems and however good the conditions at drilling.

Another considerably wet winter means there is a considerable cereal area that has not received any herbicide to date.

Generally, grassweeds are the priority and will soon receive a mix of mesosulfuron + iodosulfuron.

This year, it has been the frosts that have had a serious effect on oilseed rape crops, crisping up many of the bigger leaves, particularly where canopies were large.

Light leaf spot can be found relatively easily so, where needed, a mix of prothioconazole and tebuconazole, alongside boron and molybdenum, will be applied to address any deficiencies, promoting strong spring crop growth.

Levels of flea beetle larvae are variable and certainly still noticeable in the earlier plantings, but not at anywhere near the levels seen over the past two seasons.

Halauxifen and cloypralid will be applied from 1 March for any areas of oilseed rape where there are high levels of mayweed and cranesbill.

This will be provided the weather stays cold enough to delay flower buds extending above the crop canopy, which is the cut growth stage for spraying and always a challenge to achieve.

Propyzamide was applied in many situations just in time before 31 January to tidy up grassweeds.

This winter has been another year where cereals are very variable, ranging from growth stage 12-27 depending on drilling date, with the main disease to date being septoria.

Fields of Reflection are showing varying levels of yellow rust, despite the frost and some recent snow cover.

It is still too early to warrant a T0, but worthy to note that inoculum is present as we plan T0 fungicide applications.

Barley yellow dwarf virus levels are low, even where crops have had no insecticide.

Where there is damage, it is generally limited to individual plants or small patches – this being more of an advantage of the later drilling dates.

Any backward crops of wheat or barley showing a deficiency are being treated with manganese and magnesium to optimise plant health and encourage tillering as they start to use early nitrogen applications being applied now.

Since my last blog, crops grew well through the autumn period, such that they went into the winter period in pretty good “fettle” – even cereals planted later after potatoes or maize had managed to put on good leaf area and started to tiller.

December and January rainfall was higher than last season – at just under 300mm, which is about one-third of our annual rainfall in two months.

As a result, we have had some fields that have had a visit from the river on a couple of occasions.

As a result, some wet-area crops have gone backwards, but I am more confident this season that they will recover.

After a cold spell, the weather flipped at the end of February with a hint of spring, bringing some warm, sunny days, but frosty nights.

These lengthening, warmer, drier days means minds are getting focused on the first jobs on the field work list, although this will be premature on some of the river ground, which still has some floodwater yet to recede.

It will be March when you read this and with a run of dry weather, ground conditions can change rapidly, so the first jobs will be some N:S fertiliser on OSR and winter barley.

However, there are some fields that looked really good before Christmas, where the cabbage stem flea beetle larvae in leaf petioles has significantly reduced the canopy and causing some concern.

Unfortunately, the couple of -5C frosts were not enough to reduce larvae numbers.

We are hoping that the latest Adas research findings that these crops can still recover to yield reasonably is repeated at the field scale.

There are signs of “mid-ribbing” in many crops so some foliar molybdenum and boron will be applied.

Also, recent leaf samples sent for Bayer Spotcheck assessment are showing light leaf spot levels at 25-30% and, in this first spray job, amino acid will be included where crops need a pick-me-up due to wet feet.

Barley and oat crops are holding good colour as yet, but the former will be targeted for its first fertiliser split to maintain the good amount of tillers already produced, which is critical to optimise yield.

Rhyncosporium and mildew levels are sufficient to make me inclined to include a fungicide with the first plant growth regulator application these crops will need.

Autumn residual herbicide weed control in wheat has been pretty good and the later-drilled ones have a fairly low weed burden thus far.

With the current high diurnal temperature fluctuations, contact herbicides for grassweed control will be held back until temperatures are more stable to lessen the potential effect on crops.

Yellow rust is fairly easy to find in early-drilled crops, especially Gleam, but one benefit of the frosts is that this is much more difficult to find.

However, it is already starting to develop again so will have to be covered at T0.

Septoria is easily found in most crops – an indication of the wet December and January – however, lower leaf loss will reduce this temporarily.