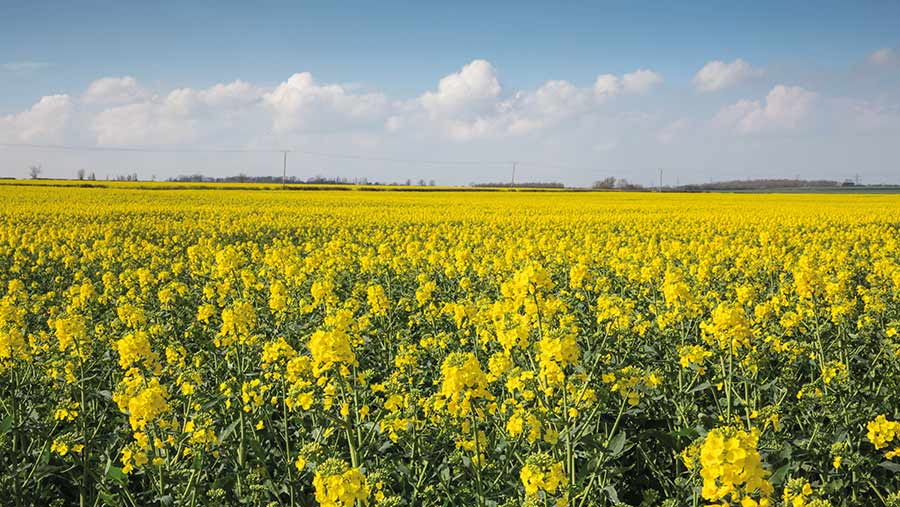 Dry days and cold nights are keeping a lid on plant disease levels in crops, although the lack of rain is starting to show with crops exhibiting slow growth and signs of stress.

Agronomists are weighing up fungicide inputs in these dry conditions, as experience shows that the first signs of rain will heighten the disease pressure.

Oilseed rape crops have been hit by late frosts just as they moved into flowering, so there are some concerns on how this will effect pod set and, eventually, yield.

The weather continues to challenge us and our crops. Cold, dry weather and consecutive frosts have left crops shell-shocked and early effects of drought stress are now clearly visible on lighter soils.

Well-rooted crops are still able to access moisture, but prolonged dry weather is hindering the uptake of nitrogen and other nutrients. Rain is needed soon to maintain yield potential and help establish spring crops, but the forecast remains worryingly dry.

Dry conditions have led to uncertainty and debate about the level of crop inputs required (particularly nitrogen and fungicides), especially where yield potential appears threatened on late, backwards crops.

Late September-drilled wheats now have leaf three fully emerged, while it is only just peeping out in some December-drilled crops.

Septoria pressure in these dry conditions remains low and varieties with strong ratings for septoria resistance, such as Extase and Saki, are visibly clean throughout the canopy.

However, it is possible to find fresh, aggressive lesions on some varieties low in the canopy. This source of inoculum is more concerning in thick crops where emerging leaves are in close contact with the disease.

Yellow rust pressure has returned with a vengeance and active foci can be seen in untreated susceptible varieties. This is a reminder to tailor the fungicide programme according to a combination of disease ratings and visual observations.

Spring crops are establishing reasonably well  – albeit slowly. This season, most seed-beds are reasonable, and although there is moisture at depth, it may not be immediately accessible to the seed.

Delicate beet crops should be treated kindly in these conditions; early sprays should be a low dose without oil and timed to avoid frosts.

Winter barley crops have been tipped by the frost and sometimes by early inputs, but these effects will disappear as new leaves emerge. These crops are now expected to grow fast after being held back by the cold.

As spring barleys approach early stem extension, they will be ready to receive herbicide, fungicide and micronutrient treatments.

Oilseed rape has been battered by the frosts; we wait to see the effects of this on pod set. Most crops should recover from these effects, although the immediate impact seems worst in frost hollows or where there is significant flea beetle larvae infestation.

Potato producers have made the most of the dry spell, and planting has been going on at a great rate.

Daytime temperatures have been pleasant, but there is still a chill at night, and autumn-sown arable crops are not so happy.

Scottish crops are less stressed than those in Northumberland, and spring crops are looking very well – clearly finding sufficient moisture to germinate and get up to two leaves without apparent difficulty.

It is now hard to believe that we were waiting for the ground to dry sufficiently to get across fields with fertiliser. However, we did not have such a troublesome autumn and much of the season lies ahead of us.

Wheats are bearing up very well, and there is little disease in the upper leaves.

Some varieties were harbouring rust, and these were nicely cleaned up with T0 sprays. There is septoria lurking on the lowest leaves.

Heading towards T1, I am going to assume the rain will come, and keep reasonable septoria protection at the forefront of product choice.

Without Adexar – last year’s preferred option – I am looking at Ascra (bixafen+ fluopyram+prothioconazole) as a likely T1 choice. New chemistry will come into the equation for T2.

Winter barleys are looking a bit sorry for themselves and finding the conditions more of a challenge – wet feet through the winter and now insufficient rain to wash the nitrogen into the soil. They have moved through the growth stages very slowly in the past month.

The T1s are on most crops now, and a second dose of Siltra (bixafen+prothioconazole) is planned for T2.

Oilseed rape is coming into flower very slowly and it looks as though flowering will be a long, drawn-out affair.

Very forward crops have suffered from the late frosts, with some plant losses, but as ever with oilseed rape, it is hard to tell by looking at these crops how they will turn out. Grain prices are strong, and while I would not advise selling rapeseed forward, the wheat trade should be tempting some deals to be done.

It seems too much to ask for a “normal” season, as recent record-breaking extremes seem to be the new normal, with a very cold start to April and frosts every night in the first two weeks of the month.

As a result of the low temperatures, crops are not moving through the growth stages as you would expect for this time of year.

Therefore, walking wheat crops for T1 timing seems to be ongoing, whereas usually the week of St George’s Day would see the majority of leaf threes emerged.

This season, lots of T1 recommendations have been sent out with a “spray in five to seven days” comment, and the week this article goes to print will be another week of checking on leaf three emergence.

As many T0s only went on at the start of April, I am content to wait for leaf three to be fully emerged on main tillers, with leaf two poking through.

Most of my fungicide input will be based on SDHI and  prothioconozole chemistry. I am not tempted to cut back too much, as on September-drilled crops I can still find moderate amounts of septoria on leaves five and six, and eyespot can be found.

You have to spray for what the next three weeks’ weather might throw at us, and for us in the West, it is more likely that will include some rain, so we have to protect against a rapid increase in septoria.

A benefit of the frosts is that yellow rust has been kept at bay, but you can find some infection in later-drilled crops. One of the more difficult decisions is the level of plant growth regulator (PGR) input, as trinexapac can be harsh on crops in dry weather.

Winter barley crops are looking promising, although in the dry conditions, with a lack of fertiliser uptake, these are hardly above welly height. They are well rooted, so I am hopeful they will bounce to a more normal height by the time we get to flag leaf.

Rhynchosporium and brown rust have been controlled reasonably well by T1 fungicides, although stress spotting is now becoming evident.

Oilseed rape crops really haven’t liked the frosts and this is just another challenge, as they have crept into flower rather than rushed. At least the cool, dry conditions mean the sclerotinia risk is minimal.

Most of my crops had a yellow bud fungicide with a PGR where deemed necessary to encourage branching, so this has given protection in early flowering.

The purple haze across many fields of grass on the Downs shows they remain as stressed as their growers. With no rain on the horizon, this is causing concern, particularly where livestock are rapidly running out of grass.

Recent frost and even the odd flake of snow caused crop growth to slow and it is only just starting to get going again as temperatures rise.

Fieldwork is generally up to date, but will require rain to wash in fertiliser that is sitting on the surface and is only receiving moisture from the frost and morning dews since application.

Most of the winter wheats are at growth stage 30-31, with leaf four fully out and leaf three up to 40% emerged. Tebuconazole-based fungicides have been applied to crops that are either infected with yellow rust or at high risk. Varieties at higher risk from septoria have received folpet.

The recent low temperatures have slowed down the development of both rust and septoria, and there is little or no disease in the top four leaves of varieties such as Extase, Siskin, Graham and Firefly. Yellow rust pressure is low, but can be found in Zyatt, Kerrin and some Skyfall.

The more backward, untreated crops continue to be inspected for disease and growth stage. This week, first wheats with good potential will receive a T1 mix of the SDHI fluxapyroxad and mefentrifluconazole.

A few forward crops received a T0 of straight prothioconazole, which will allow a slight delay in T1 timing.

Rhynchosporium is more prevalent in crops where there are a lots of spring barley volunteers that have multiplied the disease. An appropriate plant growth regulator will be tank-mixed to reduce the risk of lodging, and a higher dose used for taller hybrid varieties.

Oilseed rape crops are variable, ranging from those starting to flower to areas at the mid-flowering stage.

Light leaf spot can be found in crops that received a tebuconazole and boron application three to four weeks ago. Therefore, these crops have received an application of prothioconazole and, based on the weather, will be reassessed in a few weeks.

Winter bean growth has stalled due to cold conditions, but as the weather improves, they will grow rapidly. Downy mildew that was present has dried up.