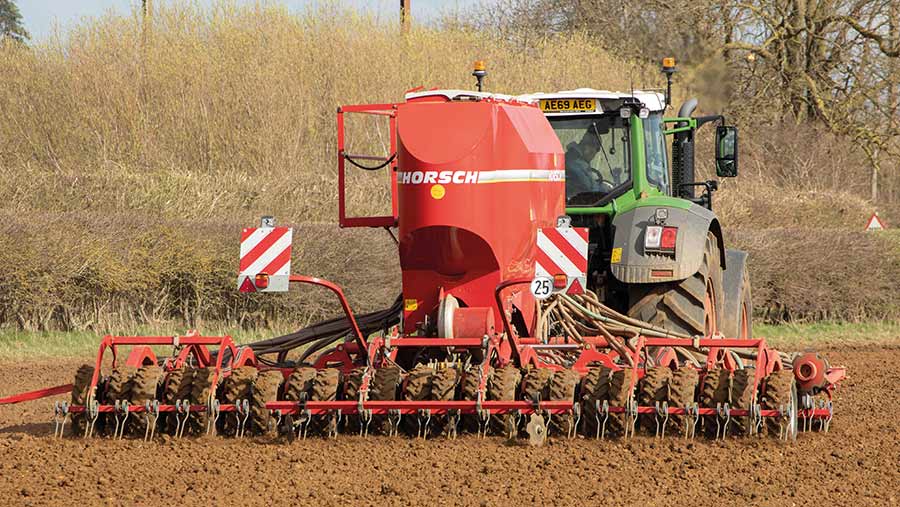 Cooler conditions have meant crops have been slow to get going this spring.

Crops are now into stem extension and winter barleys in the East are receiving their early fungicides and plant growth regulators.

For wheat, T0 plans are being firmed up and the yellow rust threat seems to have abated in some areas, but farmers are still being advised to remain alert.

See also: How a grower is preparing for ELMs as direct subsidy ends

The drier conditions mean spring drilling is under way, and while seed-beds are good in Scotland, soils are still cold.

For heavy land, it has proved difficult and has required patience.

Oilseed rape is into stem extension and even the most backward crops are beginning to grow upwards.

There was a lot of frost damage from the last cold spell, which lost significant amounts of green leaf area, but disease levels are low.

For most growers, I am happy to leave these crops until mid-flowering for a fungicide.

There are a few crops with broad-leaved weeds to tidy up, and Korvetto (clopyralid + halauxifen) offers a good spectrum of control.

This is an opportunity to add some tebuconazole to control light leaf spot if necessary.

Winter barleys have developed rapidly, as ever, and there seems to be mildew in small amounts in most crops, irrespective of disease ratings.

Plant growth regulators are going on now, and the mildew will be assessed as we head towards the T1 spray, and Cyflamid (cyflufenamid) added to the mix if the mildew is still in evidence.

Wheat crops have come through the winter better than expected, given the state some of them were in following a very wet autumn.

The backward crops have responded to a small dose of early nitrogen and there is distinct fresh growth.

Some varieties had a fair bit of yellow rust early on, but this has subsided and the lower leaves have died off. We need to be wary of rust.

It was the main disease threat last season, and there will be inoculum from grasses in field margins, ready to infect unprotected crops.

Septoria is more evident now too, and the options without chlorothalonil are far from inspiring.

My T0 is likely to be a low rate of tebuconazole, with Comet (pyraclostrobin) where I know rust will be a threat, plus half the chlormequat.

There is some debate about the value of T0 now that chlorothalonil has gone, and my growers north of the Forth will be advised to go without it.

For the Lothians and points south, the threat of rust is far more of an issue, and missing T0 seems an unnecessary risk unless the variety has excellent resistance.

Spring crops are being drilled into good, if somewhat cold, seed-beds.

Pre-emergence herbicide for beans will be Nirvana (imazamox + pendimethalin), which does a good job, and I now have some growers needing Liberator (diflufenican + flufenacet) on spring barley crops as a routine treatment for annual meadow grass.

March seems to have been a month of waiting in anticipation, and I don’t just mean for the easing of lockdown.

Although we have had the odd afternoon of sunshine, when you could feel spring has sprung, generally the cloud and cool temperatures or any sunshine would be followed by a grass frost, so this has meant that many crops have been fairly slow to get going.

Oilseed rape crops are typical of the cool conditions, with not may crops rushing into flower – as of last week there was only the odd field at yellow bud.

The main dressing of fertiliser will be applied to try to get crops going; as many are looking main raceme dominant, a specific plant growth regulator will be used to try to encourage some further side branching.

This policy will also be used on crops that were challenged by cabbage stem flea beetle larvae in leaf petioles for the same reason to help mitigate against losses.

With the cool weather, it was a surprise to find pollen beetles so easily, but they are still below threshold.

While warmer weather is forecast – more favourable for them – it will also encourage onset of flowering, which will reduce risk significantly.

I have not sprayed for pollen beetle for a number of years, but with resistance widespread, I’m pretty sure this will be the case this season.

Yellow rust that was easy to find in early March seems to have been dried up by the aforementioned frosts.

So T0 will be more yellow rust preventative, such as a strobilurin, rather than the eradicant that I expected at the beginning of the March.

Now we no longer have a cost-effective multisite, septoria control will be focused on a robust T1, although we will have a small look at the new “elicitor” products to see if they have any place in control going forward.

Movement of the ear to growth stage 30 and more stem extension growth has been slow, which makes the level of plant growth regulator input at this stage challenging.

Winter barley has also been slow to take off, and by the time you read this article, most T1 recommendations will be issued.

Disease levels are moderate, with rhynchosporium most common, but brown rust can also be found, especially in hybrids.

Leaf area and tillering are at good levels in most crops, so second applications of fertiliser will be made to maintain tillers and plant growth regulators to prevent apical dominance.

There hasn’t been a significant flush of broad-leaved weed emergence, so generally it will be a tidy up of wild oats and/or cleavers with T1.

The first of our spring crops have been drilled in the past week into pretty good soil conditions.

Drier, warmer soils have encouraged crop growth and this has allowed spring work to gather apace.

Spring drilling is under way, although making seed-beds on heavy, wet soils has been difficult and required patience.

Particularly where land is poorly drained or was left in poor health after wet harvesting conditions of root crops and maize.

Winter cereals look in better condition as they use nitrogen and early applied micronutrients.

September- and October-drilled crops have reached or are approaching early stem extension; these now require early fungicide and plant growth regulation as appropriate.

Active yellow rust can be found in susceptible varieties; these crops should be treated around early stem extension (growth stage 30) and monitored.

If disease pressure increases in highly susceptible varieties, an interim spray may be required before the next planned application at T1.

Yellow rust populations are dynamic and can diverge, affecting the resistance status of varieties.

Therefore, early infection in some varieties can be unexpected, especially as the Recommended List rating is based on adult resistance, which may not be effective until later growth stages.

Septoria infection is present on lower leaves. There is a visible difference in the severity of infection between varieties with different ratings. Lower leaves of “cleaner” varieties, such as Saki and Extase, are visibly more green.

Spring weed control in barley should be completed before the crop meets in the row and shades the target weeds.

Sugar beet is going in. Let’s hope growers can establish crops quickly knowing that aphids are forecast to arrive later this year in mid-May and that plant maturity (around 12 leaf stage) reduces the impact of the viruses they transmit.

Good crops of rapeseed are approaching yellow bud, while others struggle due to a range of factors, including cabbage stem flea beetle larvae, pigeon damage and waterlogging.

As temperatures warm to about 15C, pollen beetle will migrate into the rapeseed. Small, backwards crops will be vulnerable for a longer period, but check pest thresholds before treating crops.

Where required, choices for pollen beetle control are limited and relatively expensive.

They include acetamiprid (such as Insyst) and indoxacarb (such as Rumo). Check individual labels for the latest timing of applications.

Following another generally cool, dry week, it has allowed some of the heavy Weald clays to dry and travel well, allowing stubbles to be sprayed off ahead of cultivations, with drilling likely to follow in earnest this week.

Meanwhile, on the Downs, spring barley establishment has been excellent, and although there has not been much in the way of warmth, growth has been generally steady across these and most winter-drilled cereal crops.

Cereals have responded well to the first nitrogen applications and a further application is due shortly.

Oilseed rape has increased in its variability, with stronger crops now well into flower buds extending above the crop with the first signs of a yellow flower.

Late pigeon grazing and a steady flea beetle larvae pressure are still holding some crops back.

Most OSR crops have experienced a degree of light leaf spot requiring a fungicide based around tebuconazole and prothioconazole.

In winter wheat, advanced crops are approaching GS30. The crops are seven to 10 days away from a T0 spray.

The first pustules of yellow rusts have appeared, but remain at a low level overall.

Where required, T0 fungicides plans are being based around tebuconazole applied with a plant growth regulator and likely to be applied around the first week of April on varieties susceptible to yellow rust, such as Zyatt and Skyfall.

Grassweed herbicides are still being applied, but where crops were treated a few weeks ago, the blackgrass is now showing signs of beginning to work.

Overwintered wild oats are growing well, but with only the first spring wild oats starting to emerge, it is a case of being patient to give any remaining plants the chance to germinate.

A spring tidy-up of overwintered broad-leaved weeds is being carried out.

Winter barley crops are somewhere between T0 and T1.

The crops with stronger growth will receive a T1, which will be applied either side of Easter, especially on forward varieties that have not received an early plant growth regulator and brown rust on the barley yellow dwarf virus tolerant variety Wolverine.

Many winter barley crops, however, are growing more steadily than normal and can wait for a more robust growth regulator rate at growth stage 31.

Winter beans are growing away after coming through the winter looking very well, with any final graminicides being applied now.

Spring broad-leaved weed control is limited in winter beans and so bentazone will be applied where required, just as the crop becomes more competitive, shading out the weeds weakened by the herbicide.

One advantage of direct-drilled beans does seem to be a reduction in the overall weed pressure.