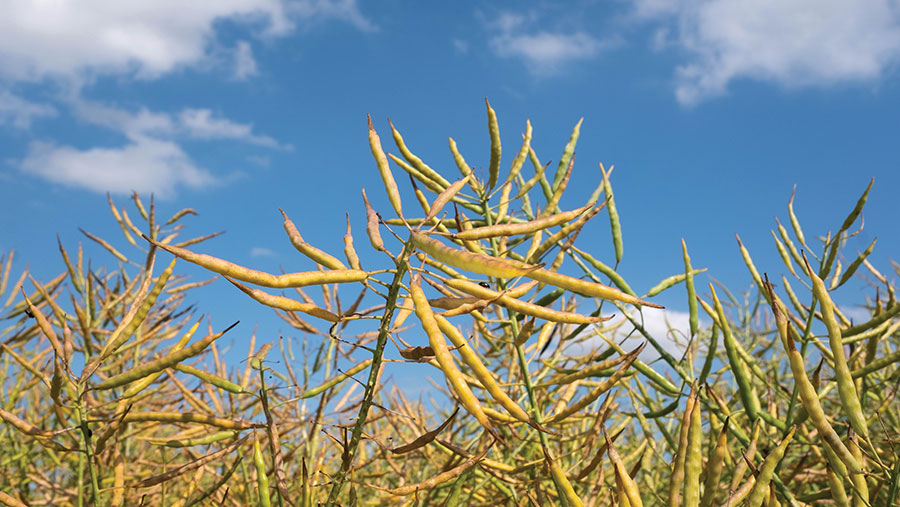 The rain has finally arrived, but for many crops it has come too late. While it will help some crops, rain brings other potential challenges, such as a flush of broad-leaved weeds in already thin crops.

Oilseed rape is nearing the time when growers need to decide whether to apply a podstick or not ahead of the desiccation spray.

Finally, growers are being advised to keep an eye out for ergot, given the larger area of spring wheat in the ground.

Frontier (Essex)
We have finally had some long-overdue rain. For crops on lighter soils, it may be a case of too little too late, with harvest now not far away.

However, wheat crops on heavier land have held on remarkably well and the recent rain should help during this key grain-filling period.

While the rain will undoubtedly have improved the availability of residual soil nitrogen, it may be too late to really influence grain nitrogen content, particularly as most crops are now finished flowering. Given the milling premiums available, the focus now has to be whether a foliar nitrogen application to the ear is likely to be cost-effective.

Yellow rust has been the disease of 2020 in winter wheat. It seems to have affected nearly all varieties, even those with higher resistance ratings.

Latent periods have been very short, given how dry it has been. However, well-timed fungicide programmes, with the inclusion of an azole and strobilurin, have managed to keep the disease under control.

Given that epoxiconazole, a foundation active when it comes to yellow rust control, is now under revocation (last legal use date 31 October 2021), it is key to factor in rust susceptibility when considering varieties for the 2020-21 season.

As temperatures warm up, keep a watch for late brown rust in susceptible varieties such as Crusoe, and particularly if the last fungicide did not have tebuconazole or a strobilurin included.

OSR desiccation
Winter oilseed rape is on the turn and will be desiccated within the next two to three weeks. Where crops are variable, pod sealants have been applied ahead of the glyphosate timing. This will help protect the forward areas from shattering when applying the desiccant later on.

Winter barley and particularly two-row conventional varieties look set for an early harvest which should allow an early entry in oilseed rape.

Quick, early establishment is a key factor to the success of establishing the crop and, alongside nutrition other methods, have been tested to help get the crop past the most susceptible cabbage stem flea beetle grazing stage.

The use of fenugreek as a companion crop has proven to act as a deterrent by masking the volatile chemicals released by the OSR plant. With widespread resistance to pyrethroids, the benefit of multiple applications is limited.

Companion cropping is going to be used this autumn, either to complement foliar insecticides or where their effectiveness is thought to be negligible, which will hopefully also allow populations of beneficial species to build and be maintained.

Pearce Seeds (Somerset)
We have finally had some rain, although I fear it has come too late to make a big difference to most crops.

The winter barleys are now beginning to turn, and at the moment it looks as if they will be earlier than usual. They look good on the better ground, but are very thin on the heavier land. Yields of both grain and straw are going to be low.

The winter wheats have lost tillers and when you can still see the drill rows, you know they are thin. Barley yellow dwarf virus is now showing itself quite nicely in wheat and oats.

Saving costs on these has been the name of the game. Most of my crops will end up in the silage pit, so a T3 will not be applied, as most crops are fairly clean at the moment and are likely to be harvested within the next three to four weeks.

The spring cereals that were looking good have lost tillers over the past month and are now thin and struggling. The recent rain will only encourage secondary tillers in the crop and they are only a headache when it comes to harvest.

Many of the spring crops are very short, with most only about 30cm tall, if you are lucky. The outcome of this is that our livestock farmers in the South West are going to have to pay more for the straw, as yields on all cereal crops is going to be low.

Short crops
The peas and beans do look OK, but again are very short, and harvesting all the pods may be difficult. There are now plenty of black bean aphids in the spring beans.

There are many spring-sown crops that have suffered from the severe lack of moisture. Grass reseeds is one of these and I envisage many being redrilled or oversown when we get some persistent rain forecast. Some of these were redrilled following failed autumn crops.

This will only add to the fodder shortages in the South West, with most cuts of silage being 20-30% down on yield. Quality in general has been very good.

The earlier-sown maize has got away and is now well above my knee. However, where the crop has followed grass that was cut for silage, the crops are struggling due to lack of moisture. This has been exaggerated in places by drilling too shallow and the seed hasn’t even germinated.

I just wish people would look at where the moisture is and make sure they drill well into it; there is no excuse with the modern drills not to drill deep enough.

We have seen more rook damage this year on maize with the demise of Mesurol (methiocarb)-dressed seed. The Korit (Ziram) and Force (tefluthrin) seed dressings quite clearly aren’t as good, and I would say Force is the weaker of the two. Who knows what will happen when we lose these…

AICC (Yorkshire)
As welcome as the rain is, I am afraid the damage has been done on many fields. On light land or very shallow soils, it is easy to find partially aborted wheat ears, which can clearly be seen in the bleached wheat tops waving at you from a distance.

Every week, a new issue or problem arises. Recovering broad-leaved weeds in multiple crops will ensure that we provide a rich, biodiverse canopy, with poppies and late-germinating charlock providing plenty of colour.

Winter wheat crops range from superb to why did we bother? Yellow rust has certainly maintained its presence all season and is the driver for T3 sprays, of which the vast majority will include a robust tebuconazole rate.

Overall, wheats are very clean, but we need sunshine to follow this rain to ensure we get the best from the mixed bunch.

Spring barley
The barley crops are a real dog’s dinner and best kept away from. Sadly, a few of the crops drilled in April will not make the combine and losses will be minimised by spraying off and starting fresh in the autumn.

In terms of broad-leaved weeds, the crops have remained relatively clean and I am hoping our recent 50mm of rain will not lead to a fresh flush. But it is 2020, so you bet it will just keep on giving.

Winter oilseed rape has finally stopped flowering. There is tremendous contrast in the crops; some sadly are dire and others good. All have one thing in common – they are short.

The most forward and consistent crops are about two weeks away from desiccation. The dilemma now is deciding whether to use pod stickers or not. Throwing it in with the desiccant is not the answer.

In order to achieve the benefit of a sticker, it has to go on about 14 days before the desiccant. My rule of thumb is if the crop is very variable, or I have a large area to combine or a very exposed site, I will use them.

The fields that meet these criteria will probably need treating within the next 14 days. For most, it will just be glyphosate, with an area missed for home-saved seed, just in case madness takes over and we decide to grow it again.

This certainly has been a year of firsts, and the oats have continued to break records. Never have I seen oats so small. There is little doubt they will double in size, but even with that, I know I will not have sleepless nights when the wind and rain start at harvest.

Zantra (Kent)
Some welcome rain over the past fortnight has eased some of the pressure on crops in the South.

Crops can be sorted into three groups. Firstly, well-established winter crops that will now finish nicely, then the later-sown winter and early-sown spring crops that will improve after the rains, and the third group is probably best not mentioned.

This year, T3 fungicides have, on the main, been recommended on milling varieties to help ensure good grain quality on top of a well-managed programme. Crop values and premiums remain good, so investing in a T3 application will help extract maximum values.

Late-season disease can affect all areas of quality, such as mycotoxin levels, specific weights and storage.

Additional rust control should also be considered when planning T3s. While disease levels have been fairly low this season, yellow rust has been present, with what looks to be newer, more resilient strains leading to the breakdown of resistance in some varieties. 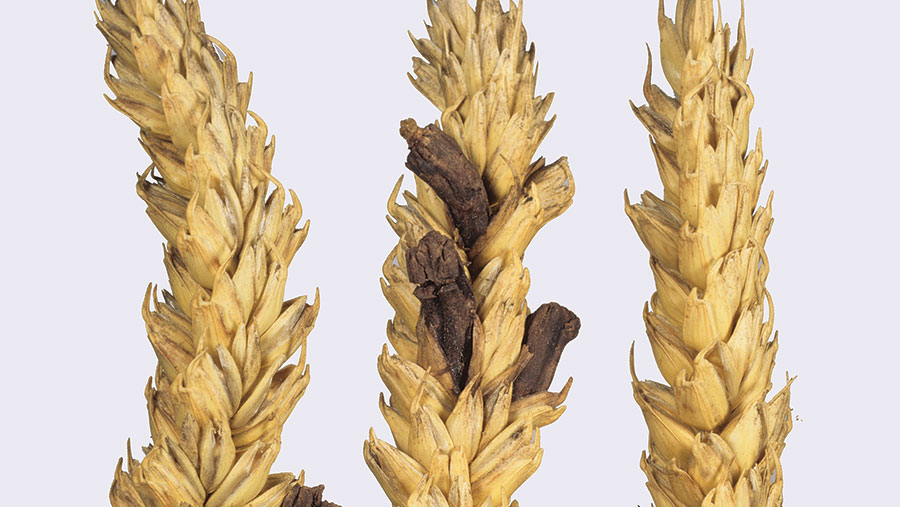 Brown rust risk
In addition to yellow rust, hot, dry conditions in June are also ideal for brown rust, with infections reaching a peak at the end of June.

Some research coming out of Canada has shown that applications of boron and copper can be useful in alleviating ergot infections.

Foliar urea applications are being planned at early grain fill to help boost the protein levels in milling wheats. As ever, these products need to be applied early morning or in the evening, to avoid scorch in the midday sun – especially if there is a wind as well.

This season also looks to be shaping into an early harvest, so we will soon be checking on OSR crops to assess the timing of desiccation, and so the cycle begins again…