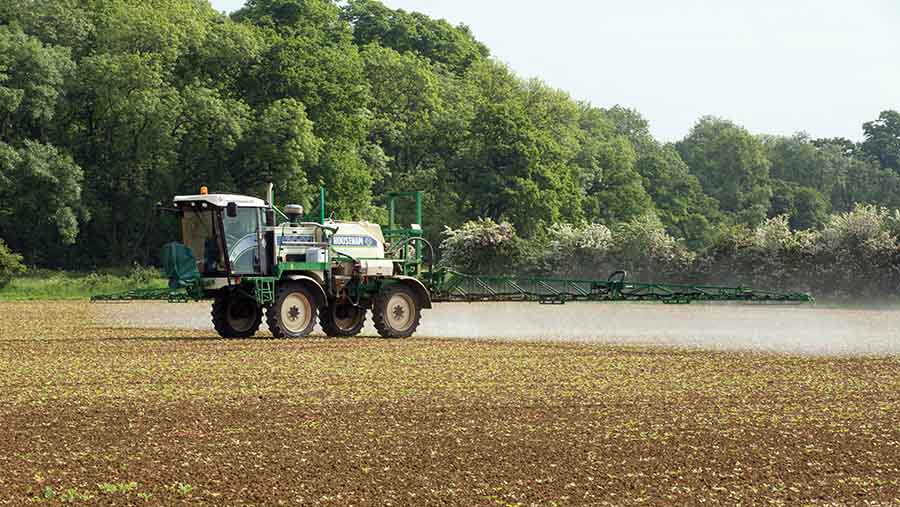 The recent rain in some parts of the UK has been very welcome, helping to revive stressed crops.

However, it also brings its own problems. In wheat, the emphasis move to septoria as crops race through their growth stages.

It also means weed flushes and managing fast-growing weeds in sugar beet crops with uneven emeregence could prove challenging, as smaller plants will be more susceptible to crop effect from herbicides.

However, not all areas have seen much rain.

In Scotland, conditions are still largely dry, with wheat hardly moving, while spring crops starting to show signs of stress.

Gentle rains have been a game changer for drought-stressed crops.

Weeds are also germinating, but there is comfort knowing that herbicides will be more effective in these conditions.

Winter wheat growth stages vary according to drilling date, but even December-drilled crops are now at the T1 timing (final leaf 3 emerging).

T1 fungicide sprays have been tailored according to drilling date, variety and yield potential and now we wait to see the weather pattern and disease development until the next timing (most likely at flag leaf emergence).

Until the recent rain, yellow rust has been the predominant disease affecting many varieties, sometimes with high pressure where unexpected.

In September-drilled wheats, the flag leaf tips are appearing and the next fungicide spray will be timed to protect this leaf.

Winter barley crops are rallying after a difficult start and now coming into ear.

These are receiving a final fungicide including an SDHI plus azole, with chlorothalonil for additional ramularia control.

Winter beans are pleasing and receiving a fungicide mix with foliar nutrition.

In dry, cloddy soils, sugar beet establishment has been uneven.

In some cases, herbicides have been delayed until further emergence after the rain and now we race to control fast-growing, difficult weeds.

Where plant sizes within the crop vary, be careful not to damage the small beet with heavy-handed herbicide mixes.

Also, spray early or late in the day to avoid hot, sunny conditions that will increase scorch risk to the crop.

At the same time, aphid populations are high, and often beet with just two true leaves are at or close to the treatment threshold (one wingless aphid per four plants up to the 12-leaf stage).

Early virus infection at this stage of the crop could be very damaging.

It could be tricky – in some crops, all inputs are pressing.

As spring barleys approach early stem extension, they will be ready to receive herbicide and fungicide treatments.

It is a busy time for the sprayer, often moving between many different crop types, making planning, logistics and sprayer hygiene particularly important.

It has been an extraordinary month.

April turned out to be the sunniest on record for the UK, and in Scotland, it was the third driest on record, too.

The contrast with the winter months could hardly be starker, and crops are now drought-stressed.

Winter wheat has got particularly stuck, and has hardly moved through the growth stages.

Rain in the past few days may bring it on a bit, but for many places, the rainfall barely dampened the ground.

The most forward crops in my area are at a good growth stage 31, and T1 sprays are going on now.

Most are sitting at growth stage 30, turning yellow, with cracks appearing in the ground.

The one advantage of dry weather is the lack of rain splash to wash septoria up the plant, but it is becoming more evident in the lowest leaves, and my T1 recommendations are based on the expectation of a change in the weather.

All varieties are susceptible to a greater or lesser degree.

It is such a major disease for us here that a decent SDHI plus azole mix with the precious last stocks of chlorothalonil is a given.

The yellow rust that was much in evidence at T0 has disappeared – whether due to well-timed fungicide or natural plant resistance is a matter of debate.

Weeds have been a bit of an issue, with some unusual things such as chervil appearing, and very slow germination in all crops.

I have a lot of cereals following oats this year and have had to brush up on the options for removing the volunteers.

Fortunately, it is less of a headache than trying to kill barley in wheat, which was last year’s dilemma.

The spring cereals are looking good but a little stressed now.

Some manganese and sulphur early with the weed spray should help, but they really need a soaking of rain.

Some of our local potato irrigators have been busy watering spring barley, but the potatoes have now been planted and not surprisingly the reels have moved.

However, I am not rushing into spring crops until more weeds have emerged and there is a target to hit.

Most of the Downs have seen a very useful amount of rain and the benefit to crops was clearly visible the very next day.

In some cases, the rain has been heavy enough to provide rain splash and would have easily spread low levels of septoria in the base of the canopy up to newer leaves of winter wheat, which are at last looking more promising. Or are from the road, at least.

Walking most crops, they are either thin or contain various sizes of bare patches.

The rain has already encouraged a good flush of weeds to emerge and crops are being prioritised for treatment as required.

For earlier-drilled winter wheat, which has a higher risk of septoria infection and yield loss, it has been important to time the T1 fungicide at 75-100% emergence of leaf 3.

The few crops drilled up to the end of October have largely received their T1 spray of isopyrazam + epoxiconazole with CTL, where available, within the past 10 days.

However, most wheat was drilled from November to February, and the risk from septoria is currently much less, particularly where drilling took place in the new year.

Here, the winter wheat fungicide spend will be greatly reduced.

These crops are being treated like spring crops, and so are a few backward crops of winter barley, too.

Anything drilled from November onwards is likely to be ready to spray now or within the next week.

For any winter wheat drilled in December or January, the period between T1 timing and T2 is going to be much shorter as the crop develops much more quickly.

Awns are now easily visible on winter barley crops and this is the very final stage for any growth regulation and applications have now been completed or will have in the next day or so.

Most T1 fungicides were applied in the past two weeks, which is an indication of how fast development has been.

But it also means that a T2 fungicide of benzovindiflupyr + prothioconazole will be applied with ears just emerging depending on varieties and disease pressure.

However, disease levels in barley are very low, except for some brown rust that can be found in hybrid barley.

Early-drilled maize has emerged well from warm, moist soils, and drilling will be completed this week.

The seed-beds produced this spring are excellent, and pendimethalin has been applied or planned for pre-emergence as there is good levels of moisture for activity.

Who would have thought that after the previous six month’s rainfall, we would be hoping for a showery week to help our spring crops get established.

Spring crops that were established either by min-till or no-till where moisture was conserved in the seed-bed have seen the best establishment, while some power-harrowed crops have struggled with low moisture levels in the collection of golf ball clods.

In those crops, the past week’s rain might just be the saviour.

These crops are going to really motor through the growth stages now, so we are gearing ourselves up for regular sprays during May.

Spring oats are especially susceptible to phytotoxic effects so require multiple separate passes for herbicide, plant growth regulator and fungicide; trace elements will be applied to try to minimise the effects of pesticide inputs.

With many clients having a larger proportion of spring cereals, it is going to be important to try to maximise yields and biostimulants, and trace elements will be used to reduce stress in fast-growing crops so that nothing is limiting yield.

Spring beans have emerged well. Weevil notching was concerning at one stage, but with cooler weather and rainfall, they have outgrown the threat without the need for insecticide, which I am always keen to avoid having to use.

Grassweeds are emerging fast so a graminicide plus phosphite may be the first post-emergence spray we do.

Spring linseed it is a similar situation. They have outgrown the flax beetle holing and are now growing away.

We hope the pre-emergence Callisto (mesotrione) will suppress the initial weed flush, allowing a post-emergence herbicide to be delayed until the crop is stronger.

Maize plantings have started, but some have been delayed by the recent rains so will be planted in the coming weeks.

Although I don’t look after many potatoes, many growers have taken advantage of the dry weather and many fields are planted up.

Winter cereals are at a complete range of growth stages, some on the same farm.

Some September-sown wheat had leaf 3 almost fully emerged on 15 April so are ready for their first fungicide.

October-drilled crops were at the more traditional 23 April timing.

But I have some February-drilled crops that are still at the tillering stage with nothing applied to them as yet.

Winter barley crops have gone from T1 to T2 in less than three weeks.

By the time this goes to print, most T2s will be applied at the paintbrush stage.

Crops are relatively short so I’m hoping the decision not to apply any late plant growth regulator will not be regretted.